Labour accuse Theresa May of a 'con'. And WTF the Observer is doing no one knows. - The Canary 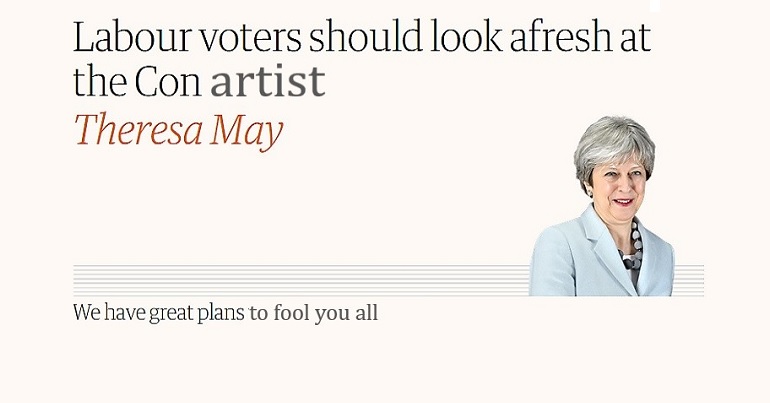 The allegedly left-leaning Observer (the Sunday version of the allegedly left-leaning Guardian) published an opinion piece by Theresa May on Saturday 6 October. Why it gave the PM a free ride to write what she wanted is unclear. But the chair of the Labour Party has made a stinging attack on her. Meanwhile, social media showed its anger at the Observer.

May and the Observer. New BBFS4EVA?

The headline of the piece was Labour voters should look afresh at the Conservatives. Why? Just to make sure they still despise them as much as they previously did? Seemingly not, as May used the article to argue that hers was the party of the centre ground.

I want the Conservatives to be a party for the whole country. I believe that the principles that guide us… can unite our people and help build a better future for our country.

That responsibility also rests on our shoulders because of what has happened to Labour over the past few years. Millions of people who have supported Labour all their lives are appalled by what has happened to a once-great party under the leadership of Jeremy Corbyn. Antisemitism has grown, the party’s response to threats to our country’s security has become equivocal, and moderate Labour MPs have become targets for deselection and harassment. These are all alien to Labour’s best traditions.

But she also repeated her claim from her party conference:

A decade after the financial crash, people need to know that the austerity it led to is over and that their hard work has paid off.

Neither May nor the Observer impressed social media:

Shout out to the Observer’s front page for accelerating the decline of print media by attempting to lose any last remaining readers the paper has pic.twitter.com/jEL6ZM4lkd

This is simply disgusting those behind the Observer/Guardian thing for Theresa May and the Tories are simply abhorrent, it’s sick, they think they’re smart trolling Corbyn, none of these wankers will ever have to worry if they have enough money for the key metre FFS!! https://t.co/P2nYzCK2vF

Labour Party chair Ian Lavery also hit back. In a statement he said:

With the Government about to impose some of their most brutal cuts yet on working people, Theresa May’s claim that austerity is over is a con.

The Tories have spent their entire time in power running down our schools, local services and NHS, while gifting huge tax breaks to big business.

The Prime Minister is clearly spooked, so is resorting to desperate pleas in an attempt revive her failing administration. The British public won’t be fooled.

Indeed, by the looks of things, austerity being over is a bit of a “con”. Because:

All this is without the benefits freeze and education budgets having previously been cut in real terms – therefore already falling behind. And don’t mention the NHS.

Clearly, though, this was of no bother to May. And even less bother to the Observer. With the Daily Mail‘s editor Paul Dacre stepping down in November, maybe the Guardian‘s Sunday paper could do with a new boss?

– Join The Canary, so we can do the job the Guardian should be doing.

Featured image via the Observer – screengrab