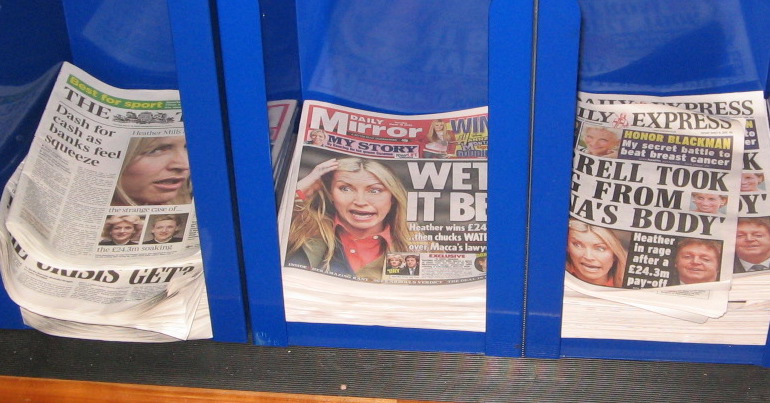 In June 2018, the Guardian announced it was part of a new initiative called the Ozone Project. It joined forces with rivals News UK, which owns the Times, the Sun, and the Telegraph to create a “one-stop shop” for online advertising. Reach – which owns the Mirror and the Express – is now also part of the group. It marks a dangerous moment because the Ozone Project signals the end of any illusion that the UK media is independent.

Ozone means that advertisers can buy online ad space, in one place, to run across hundreds of newspapers. Advertising clients will reach “a monthly audience of 41.1 million adults” by placing ads through Ozone:

UKOM Insight – Combining the assets of Reach with those of the original Ozone Project partners would give the new sales house a monthly audience of 41.1 million adults https://t.co/40CJ21hKGW pic.twitter.com/UlZbbhcvLB

We are working together to build a better digital ecosystem for advertisers, readers and publishers. The Ozone Project is a response to the challenges we all face and aims to facilitate the highest standard of digital advertising and ensure quality journalism and content continues to be funded.

There’s no doubt that most print and online outlets rely, at least partly, on ad revenue –The Canary included. But independence gives a choice to determine which advertisers are used and what messages these carry. Yet, the Ozone Project has been launched at a time when a broader investigation of the relationship between media outlets and advertisers is underway.

The Department for Digital, Culture, Media and Sport has set up the Cairncross Review to examine the future “needs of consumers and industry” in the media. One area of investigation is specifically the “role of digital advertising”. But many, including the Media Reform Coalition (MRC), fear that its:

real intention is to justify subsidising corporate news organisations that have already failed to act in the public interest and are more concerned with profit margins than democratic intent.

In its submission to the Cairncross report, the MRC has already flagged concerns that some outlets are “not re-investing their advertising revenue back into original news content creation”.

This move also raises fears that through closer financial links, outlets such as the Guardian walk straight into business arrangements with Rupert Murdoch. Murdoch has openly used the Times and Sun to support the Conservative Party. So much so, that Labour’s Tom Watson asked Theresa May directly if:

Rupert Murdoch ever made suggestions to you about ministerial or staff appointments?

Has Rupert Murdoch ever suggested to you that there might be consequences if you fail to take his advice, in terms of his newspapers’ coverage of you and your government?

So Ozone does flag questions about future editorial standards, and whether collaboration between powerful media companies condenses the UK press even further.

And there is absolutely no doubt that Ozone is a profit-driven move.

According to campaign, this move marks the end of “historic rivalry” between newspapers. Because they needed to “respond to tumbling ad revenues as Google and Facebook have gobbled up market share”.

Guardian profits have plummeted, and it’s still recording a loss. In 2017, the Sun made a loss of £60m. In 2018, Reach recorded losses of £113m. Across all print journalism, ad revenues are falling.

But as the MRC pointed out, bigger questions need to be asked about “alternative income streams (other than advertising)… to sustain high-quality journalism in the digital age”. Ozone doesn’t address this question.

Ozone is a direct plan to create more advertising revenue. But there’s a worrying side to this. Because ads run through the Ozone Project will “command 95.3%” of the UK’s adult internet users:

Recent events have shown that the relationship between advertising and media is not always innocent. So this 95.3% “command” is significant.

As The Canary previously reported, in the EU referendum online ads used by Leave campaigns played a sinister and influential role. Advertising was used for data gathering during the referendum campaign. According to the BBC, they were viewed over 169m times but many of the ads didn’t declare who placed them, or what they were for.

Although these used Facebook, the public ‘face’ of advertising changed forever following the EU referendum. So it’s vital that groups involved in Ozone remain open and transparent to reassure readers that they’re one step ahead of this trend. Yet other ‘shocking’ ads still surfaced in 2018.

In March, a public relations campaign supporting Saudi Arabia emerged to coincide with the highly criticised state visit of Saudi Arabia’s crown prince Mohammad bin Salman. Adverts appeared in print, on billboards and online in the Guardian, Times and most outlets:

Adverts on billboards, vans, in almost every paper physically & online, a weird mob who turned up at Buckingham Palace with identical flags…#Saudi are spending a lot of money on trying to make their Crown Prince not look like a despotic torturing repressive war criminal. pic.twitter.com/PN6qvPsYfd

As Green MP Caroline Lucas told HuffPost at the time:

It really is shocking to see these adverts pop up on news sites like the Guardian. They are promoting a man whose country has caused devastation in Yemen, and been accused of committing war crimes.

“The advertising department and editorial should be kept rigorously apart”

Ozone does pose other questions.

In 2015, Peter Oborne resigned as chief political commentator of the Telegraph. He wrote a scathing letter in openDemocracy and explained:

From the start of 2013 onwards stories critical of HSBC were discouraged. HSBC suspended its advertising with the Telegraph. Its account, I have been told by an extremely well informed insider, was extremely valuable. HSBC, as one former Telegraph executive told me, is “the advertiser you literally cannot afford to offend”. HSBC today refused to comment when I asked whether the bank’s decision to stop advertising with the Telegraph was connected in any way with the paper’s investigation into the Jersey accounts.

Winning back the HSBC advertising account became an urgent priority.

As a result, the Telegraph wouldn’t “allow any criticism” of HSBC in its stories, despite a major money laundering scandal emerging. Oborne said if “advertising priorities” have influence and “determine editorial judgments” it breaks trust and “amounts to a form of fraud on its readers”.

Under Ozone, will the same adverts appear on all outlets? Or, will individual outlets be able to pick and choose? What influence will advertisers have over editors? These are important questions that go to the heart of journalistic integrity and independence. As Oborne said, there is a long established ‘golden rule’:

in quality British journalism that the advertising department and editorial should be kept rigorously apart.

The Canary asked the Guardian to answer specific concerns about plans to safeguard future editorial standards once Ozone is fully underway. In particular, we asked about the Guardian coming into closer business contact with Rupert Murdoch-owned papers and the Express. And we also asked if this new advertising strategy would have any impact on the editorial line.

But when asked to comment on these concerns, the Guardian’s only response was:

Thanks for getting in touch – can I just check with you which concerns you are referring to?

New evidence shows that on certain issues – such as attacks on Labour leader Jeremy Corbyn during the antisemitism row –  mainstream outlets share similarly “‘misleading’, ‘distorted’ and ‘inaccurate’” reports. And this has been going on for some time. As The Canary‘s Ed Sykes wrote:

Instead of holding the powerful to account, outlets have focused on attacking the anti-war movement, smearing junior doctors, and portraying left-wing views as “deeply subversive”.

More recently, the Sun and the Times published articles to defend Guardian journalists’ attacks on The Canary‘s editor-in-chief. These are papers that present themselves as distinct and ‘claim’ to report on a clear left or right-wing platform. But every day, it’s getting harder and harder to see where the editorial position of one ends and another begins.

And that’s not because there’s a new centre-ground – the shift leans alarmingly to the right. The Ozone Project potentially cements this even further. Now, these papers have announced that they literally are ‘all in it together’.

The mask of a free and independent press just slipped a little bit further. Now, more than ever, it’s time for the truly independent media outlets to pull the mask off entirely.

–  Read and support other new media organisations doing their best to deliver news, analysis, and opinion in a more independent and ethical way: