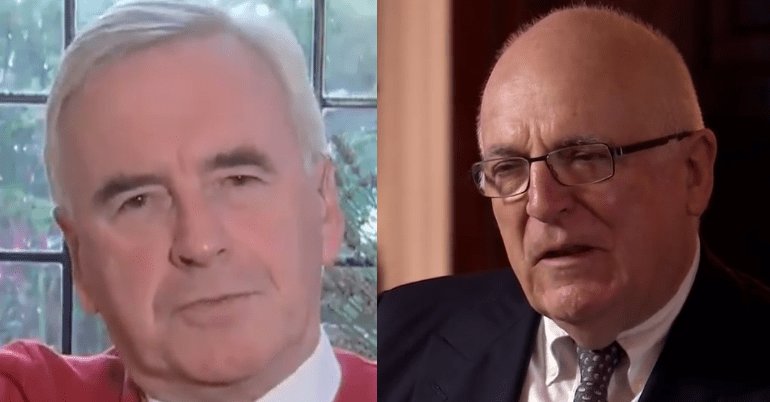 But later on the 7 October edition of Ridge on Sunday, McDonnell took down Dearlove for allegedly overseeing the fabricated intelligence that justified the Iraq war:

John McDonnell responds to accusation made by Former MI6 boss:
"I think he should spend his retirement in quiet contemplation of the role he played with regard to the Iraq War – where over half a million people were killed!"#Ridge #Marr @johnmcdonnellMP pic.twitter.com/Ff5Dww5DLb

Well I’m not surprised. This is… a reactionary member of the establishment. So I don’t think he’d welcome a Labour government of any sort… I’m disappointed with him, but there you are…

I think he should spend his retirement in quiet contemplation of the role that he played with regard to the Iraq war where over half a million people, at least, were killed. He was strongly criticised as the head of an organisation whose intelligence took us into that war.

“Facts were being fixed around the policy” of invasion

History doesn’t look good for Dearlove’s role in the Iraq war. Known as the ‘smoking gun memo’, a 2002 Downing Street document concerning the case for war in Iraq was leaked to the Times (which published it in 2005). A section on Dearlove (known officially as ‘C’) attending a meeting in Washington reads:

C reported on his recent talks in Washington. There was a perceptible shift in attitude. Military action was now seen as inevitable. Bush wanted to remove Saddam, through military action, justified by the conjunction of terrorism and WMD. But the intelligence and facts were being fixed around the policy.

The motive for an invasion that left hundreds of thousands dead

So why were Dearlove, Tony Blair, George Bush, Alastair Campbell, Donald Rumsfeld and the rest apparently fixing “intelligence and facts” to invade Iraq? Well, the answer lies outside the conclusions of the Chilcot report, which ignored or downplayed compelling evidence that the explicit motive was oil.

Retired Brigadier-General James Ellery was the UK foreign office’s senior advisor to the US-led transitional government of Iraq after the war. In 2008, at the Iraqi Youth Foundation in London, Ellery said that the invasion was about addressing an incoming “world shortage” of oil.

Among other evidence, the Chilcot report did show that oil giant BP was briefing the UK government well before the invasion. A briefing states:

The hawkish view sought a significant increase in Iraqi oil production to push down oil prices, privatisation within the oil sector, and external engagement led by the US (and possibly the UK) rather than the UN.

Dearlove appears to have overseen the ‘dodgy dossier’ that justified invading a country for its oil. So McDonnell is right in telling him to check his record. This type of uncompromising takedown is exactly what the Labour leadership needs to do to win.

– Join others in performing a Citizens Arrest on Tony Blair.