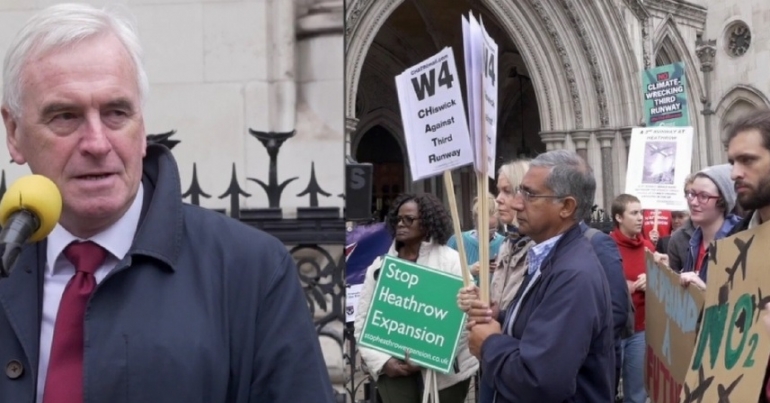 The shadow chancellor warned the UK government that a Heathrow third runway will be opposed “by direct action” if necessary. John McDonnell spoke to a crowd of protestors outside the Royal Courts of Justice (RCJ) on 4 October. Independent outlet Real Media filmed his speech. Others spoke outside the RCJ, while the High Court considered claims against a third runway at Heathrow airport.

Law suit to go ahead

According to Real Media:

The High Court ruled that five separate claims against Heathrow expansion can go to a full judicial review to be heard by two judges in spring next year.

The Mayor of London, local councils, and environmental campaigners Plan B Earth are among the claimants taking on the government.

Significantly, McDonnell said Heathrow bosses had lied about the runway:

Heathrow itself wrote us all a letter, saying that if they got a fifth terminal, they would not seek nor would not need a third runway. We were then told no ifs, no buts, no third runway. And to be frank, over the years, we’ve been lied to. And that’s why we are here again as a community, to legally challenge the third runway proposition.

McDonnell said the consequences of a Heathrow third runway would be terrible:

What we’ve got to do today, I hope, in the courts is demonstrate the impact this will have, yes on my community. 4,000 homes either rendered unliveable or demolished. Ten thousand people forced out of their homes. Our schools demolished, our community centres… A whole community forced out of properties in the villages that have been there for a thousand years.

McDonnell made clear that it’s a global issue:

By direct action if necessary

McDonnell said, “We’re poisoning the air that our very children breathe. As it is we are above the [legal] limit [for air pollution]”. And then he made clear the seriousness of the opposition to Heathrow’s third runway:

If we don’t win in the courts, I tell you this: Heathrow and the third runway campaign will be the iconic battleground – not just in London, not just in this country, but across Europe and the globe against climate change. And I tell them this. I warn them. We will not let this happen. Either by our opposition in the courts; democratically in parliament, or yes, by direct action. And we’ll do it with solidarity. We’re gonna win. We’re gonna to protect our communities, and above all else, we’re gonna protect our planet.

McDonnell says he’s been fighting this issue for 14 years on behalf of his constituency. We must bring enough pressure to bear on the rest of the Labour Party, as well as the Tories, to end this disastrous Heathrow third runway once and for all.

– Please also support independent journalism at The Canary, and share our articles and donate if you can.