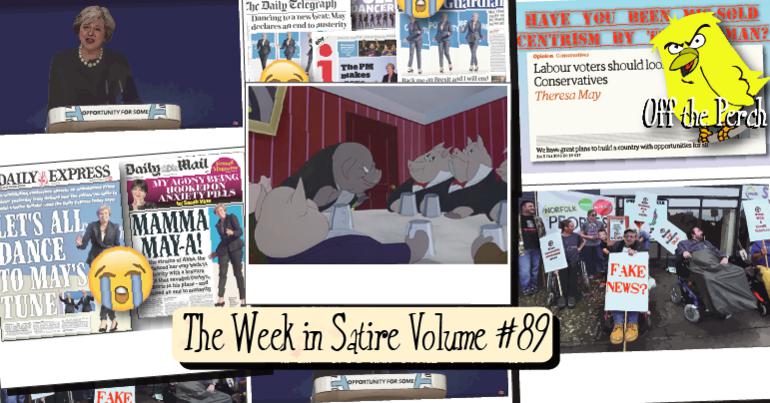 Theresa May’s speech is the mouse dropping on the dog turd that is the Conservative Party Conference. In previous years, she’s forgotten her words, slandered the Scout Association, and accidentally declared war on Norway.

This year, to avoid any more verbal spaghetti, she made sure to read out a lengthy ‘terms and conditions’ section.

As she does, May promised:

She then read out the small print of this promise at a speed which was only decipherable when slowed down six times:

The term ‘for all’ may not in fact apply to ‘all’, and inclusion in the bracket will be reliant on several factors. A person’s value will be determined by the following measures: ethnicity, age, geographical location, opinion on the comedy stylings of Jim Davidson, willingness to ignore the plight of others, ability to believe in austerity despite eight long years of failure, and a deep love for tweed.

A person’s worth will see points deducted for: protesting, complaining, looking like the sort of person who does either, speaking out against power, reading news sources that aren’t owned by billionaires, or becoming sick/disabled/pregnant.

Towards the end of her speech, May was speaking so fast that no one has been able to decipher it – even when slowed down. It turns out there are so many people excluded by Tory policy that a forty minute speech isn’t enough to name them all. 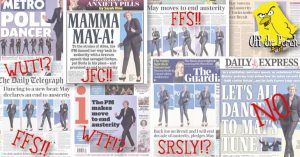 Liar promises to end austerity again but this time with dancing

Theresa May and the government before her have previously said austerity is ending. This was reported at the time, and although the media knows the same old lie is repackaged every year, they couldn’t help but become distracted, because LOOK, SHE DID A LITTLE FUCKING DANCE!

May came out jiving to Dancing Queen by ABBA. She then proceeded to:

This left newspaper editors with a dilemma:

Except – ha ha – no. Obviously there was no dilemma, no danger of it being framed as:

No. How could that be the angle? SHE DID A LITTLE FUCKING DANCE.

In the interest of balance, we should point out that Theresa May did do a little dance. As such, and with only 16 hours to prepare, it’s understandable that editors didn’t have time to put together better front pages with CRITICAL FUCKING ANALYSIS. 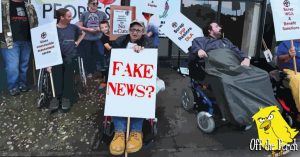 Tory welfare boss Esther McVey has claimed that benefit cuts are “fake news”. She also insinuated that everyone accusing the Tories of “letting down the most vulnerable in society” was spreading lies.

Off The Perch caught up with some of these alleged disabled liars. A woman named Karen told us:

Michael, another disabled person, told us:

I was happy when I heard cuts to disabled people were fake news. Turns out all my sanctions are still in place, though, and I’m continuing to get less now than a year ago.

The DWP responded to these accusations by releasing several statements which were at best confusing, on average besides the point, and at worst total horseshit. 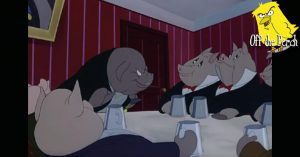 Some people like having zero-hour contracts. They enable a person to maintain a balance between their work and social life. But this statement overlooks low-paid jobs and the fact that:

PEOPLE WITH FUCK ALL MONEY OR JOB SECURITY CAN’T AFFORD A SOCIAL LIFE!

I guess you think that the 65% of people who are happy with their zero hours contracts and work life balance (compared to 58% of all workers) are either stupid or evil then? https://t.co/QizYhKNmmQ

There’s a willful attempt here to confuse things. On the one hand, we have:

The other group are:

When people talk about the issues with zero-hour contracts, they are talking about those who are

people as evidence there’s no problem is like using the autobahn as proof that motorists should be able to do 120mph in a school zone.

….Isabel Oakeshott = should not only take a zero hour contract, but try one on minimum wage! #questiontime #BBCqt

Of course, there’s a very good reason why the right wing tell us we love shitty jobs. It’s because they know people are on to them, and that leaves two options:

Although if you’re a Tory, that’s really only one option. 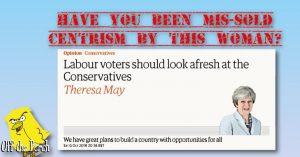 Theresa May is the UK’s most notorious defrauder of centrists. Although she’s always loved a bit of it, she’s been defrauding the political centre on a grand scale since 2016. Despite that, no one at the Observer recognised her when she walked into their offices:

The geniuses at the Observer didn’t just give May a column – they put her on the front page:

According to a cleaner at the Observer offices:

I was getting on with my job when I saw that famous political conwoman walk in. I went up to the paper’s editor and said, ‘That’s her – that’s the woman who conned all them voters into thinking she was the moderate option!’

I had a picture and everything, but this editor says, ‘Don’t be silly. This conwoman you’re showing me isn’t wearing a hat, and the person we’re about to interview clearly is.’

Once in the Observer offices, May penned an article that promised:

Despite this obvious embarrassment, the Observer has stood by their ‘journalism’. This was doubly embarrassing, as May had swiped their trousers – leaving them standing there with their underpants on show.