He may be a wasteman, but the media spin on Gove's latest proposal is just trash - Canary 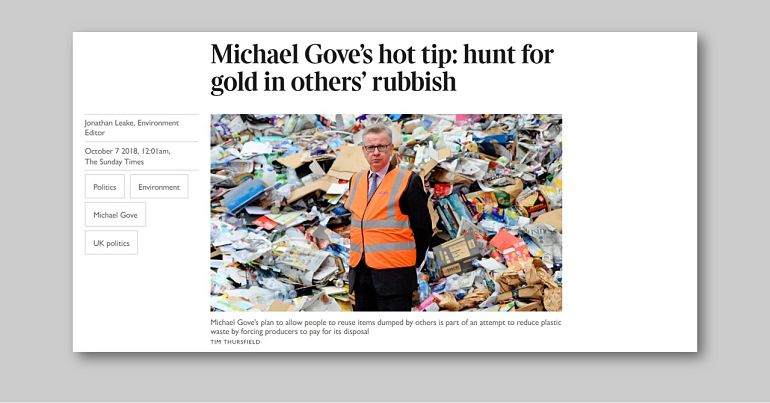 Michael Gove has a proposal which many people on social media think is a rubbish idea. There’s a question if the idea itself is bad, or if the Sunday Times has misrepresented it.

Michael Gove has a plan to boost post-Brexit Britain — open the nation’s waste dumps for business.

So far, so satirical. But let’s read on:

The environment secretary wants all council waste sites to let people pick over reject appliances, old TVs and half-used paint cans to find things they can use.

If some find the idea Dickensian, they could be right. Gove is a fan of Charles Dickens one of whose books, Our Mutual Friend, is about a family who become rich by sifting rubbish for valuables.

So it looks like this time next year we’ll all be slumdog millionaires. Except actually, you’ll be charged for the chance to get at this stuff.

Some tips are already providing this service. The Sunday Times provides a list of example prices:

So what we’re talking about is selling items second hand, basically. It just looks like the ingenious Gove has combined the value of a charity shop with the stigma of a rubbish tip. But again, is that something Gove has done, or is the issue in the framing of the Sunday Times article?

So-called ‘reuse shops’ are nothing new. The fact they operate already is mentioned in the article. They’ve actually been supported by the Green Party in the past. A Green Party councillor said this about reuse shops when proposing that Bristol should have one:

If we are to meet our zero waste ambitions we must invest in reuse. Other forward thinking councils have an income at each site where re-use shops are based alongside the recycling facilities, and we need to update ours in line with this, starting with the new facility. We have already seen how successful the repair café in Fishponds has been. Recycling is good, but re-use is so much better.

People who presumably didn’t read the article were quick to take the Sunday Times headline and run:

Climbing through rubbish heaps in hopes of finding something valuable…

Not just a metaphor for brexit, but part of the actual plan…

Panic over. We’re going to be fine. https://t.co/P5A0RSrLty

If they’d read it, they’d know the government isn’t actually proposing that people comb through rubbish dumps. The article says lower down:

Some councils already have reuse shops at their dumps, which have become popular with some people for family excursions at weekends.

The Times has framed this story as if Gove is proposing it, though. That’s unfortunate for this basically practical idea, as people tend to share stories without reading them.

It gets worse, too. The Telegraph reported on the Sunday Times article and said:

Homeowners should be allowed to scavenge for old televisions, furniture and appliances at dumps so they can reuse them, Michael Gove has suggested.

The idea that anyone has proposed ‘scavenging’ isn’t true. It just isn’t. Reuse shops are no more ‘scavenging’ than going to Lidl is ‘foraging’. Everyone is repeating it as if it’s true, but it’s just an exaggeration of the first article, which suggested people will be encouraged to ‘hunt’ through rubbish: 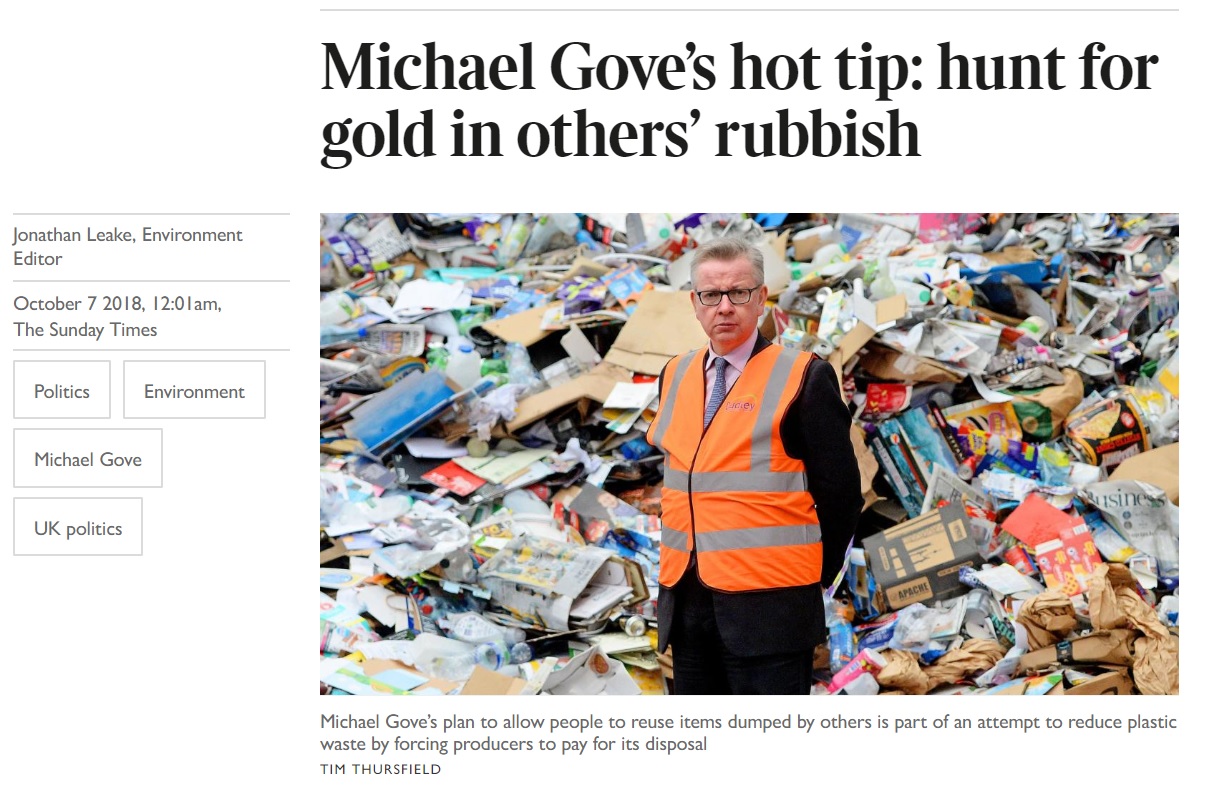 It’s important to question the government. More often than not, its policy proposals fall flat – especially when it comes to the environment. Beyond that, Gove’s commitment has also been criticised. And announcing this a week after the alleged ‘end of austerity‘ was obviously not a smart idea.

Equally though, it’s important to question the media. Because protecting the environment isn’t always at the top of its agenda:

The important takeaway from this story is to question everything. When I started writing this story, I thought it would be a humorous take on Michael Gove calling for legalised scavenging. That’s the story going around, and it’s much funnier than this one, but it isn’t true.

At the end of the day, it’s not in our interest to help corporate media spread untruths. Especially not when it’s using our dislike of Gove to bash the environment.

– Read more articles from The Canary on the environment.