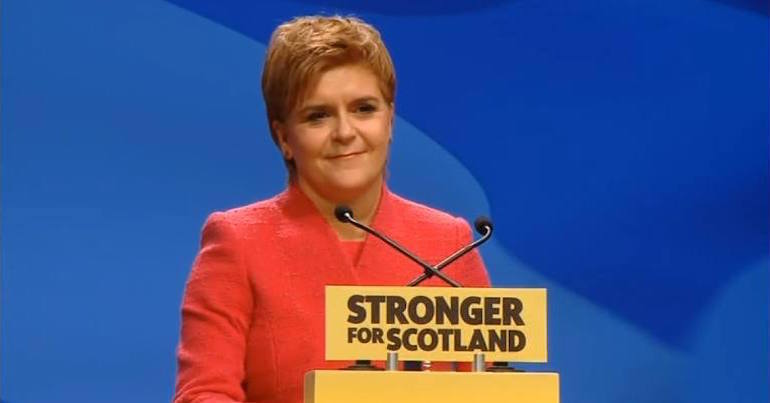 Scottish first minister Nicola Sturgeon has taken down the Daily Mail‘s self-described “political hack” Andrew Pierce. On 7 October, Pierce called Sturgeon “another member of the political elite who think they know better than the people”. His accusation came after Sturgeon confirmed SNP MPs would vote in favour of a People’s Vote if given the opportunity in the House of Commons. It didn’t end well for Pierce.

In fact, Sturgeon shut him down in just 10 words:

The people I serve voted 62% to remain the EU. https://t.co/sbLoyUI3mM

Indeed, the Scottish electorate voted 62% to remain in the EU in the 2016 referendum.

Nicola Sturgeon and a People’s Vote

Sturgeon announced her support for a People’s Vote on The Andrew Marr Show on 7 October.

The first minister of Scotland and leader of the SNP spoke ahead of her party conference being held in Glasgow between 7 and 9 October.

Pressure group People’s Vote UK took to Twitter after the interview. It said the campaign for a vote on the final Brexit deal had “momentum”:

BREAKING: Nicola Sturgeon say that SNP MPs will vote for a #PeoplesVote if there is a vote in Parliament – this is absolutely huge news – please RT so everybody knows that all the momentum is with our campaign for a #PeoplesVote on the Brexit deal: pic.twitter.com/5cxC7OIIf1

As reported by the BBC, Sturgeon claimed the UK was heading towards a “cobbled together” exit deal from the EU which would be “almost as unacceptable as no deal at all”. Any deal agreed between the UK and EU will go to a vote in Westminster. It will also need to be ratified by the other 27 EU member states.

In those circumstances, sensible MPs of all parties should come together to look at the alternative…

Sturgeon’s takedown of Pierce attracted a lot of reaction on Twitter, including some tongue-in-cheek digs.

One potential ‘Brexit refugee’ might want to move to Scotland:

I’m coming to live in Scotland if Brexit happens as will thousands of other Brexit refugees who no longer recognise the country they live in. I hope you will let me in!

But Mr Malky intervened and shared a handy diagram:

Not so fast
First you have to pass the citizenship test pic.twitter.com/VSoasTdoP6

Another voter believed the SNP and other “Indy parties” will deliver independence for Scotland:

And thank you for standing up for us! I also have faith that the SNP and other Indy parties will lead us to independence, free from corrupt Westminster. And while I believe in full EU membership, I understand if an indy Scotland aims for something inbetween. Indy first.

An English businessman said he wanted to move his business to Scotland if it remains in the EU:

And one voter said she’d joined the SNP after Sturgeon’s announcement:

Just became a SNP member after this mornings confirmation – Nicola you are the closest thing we have to a progressive leader, been watching for a long time, now utterly convinced and backing you all the way – give my child her future back!

An English Remain voter would back Scottish independence after moving to Scotland:

Would vote for Independence now living in ???????✅

Happy at having a political leader who displays common sense and integrity when the current political climate is full of the venal, the self-interested and the stupid ✅✅✅

And one voter who was against Scottish independence in 2014 now backs the campaign:

To all those people saying that Scotland voted to stay in the UK, I was one of the no voters. I was at the AUOB march in Edinburgh yesterday and I will be voting Yes at the next Indy ref, I know a lot of other no voters who have changed their minds and will also be voting Yes

As for Pierce, it looks like the Scottish first minister has given him his heid tae play wi.