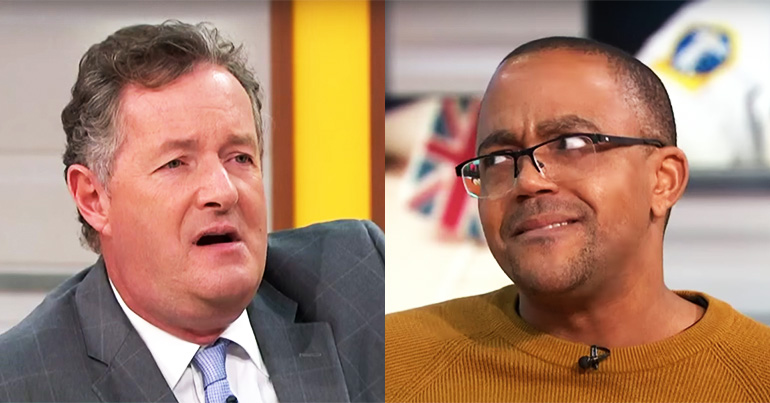 On 9 October, Piers Morgan’s fragile worldview collapsed on daytime TV. And all it took were some basic facts about one of his all-time heroes, Sir Winston Churchill.

Warning: if you’re an extreme patriot, you might want to look away now.

The fiery debate on Good Morning Britain kicked off after astronaut Scott Kelly praised the former British prime minister on Twitter. He later apologised for his tweet when social media users directed him to Churchill’s well documented racist history.

Did not mean to offend by quoting Churchill. My apologies. I will go and educate myself further on his atrocities, racist views which I do not support. My point was we need to come together as one nation. We are all Americans. That should transcend partisan politics.

After the debacle, it seems Piers Morgan – a passionate defender of Churchill – wanted a chance to protect his hero from the comfort of the TV studio.

But he clearly wasn’t prepared for what guest academic Dr Kehinde Andrews had to say:

'He was a racist. He was someone who believed the white race was superior, the natives didn't have any right to their lands in the Americas,' says Professor Kehinde Andrews commenting on Winston Churchill.

It comes after an astronaut was forced to apologise for quoting him. pic.twitter.com/Z8aASSFY3P

The historical record here is clear. Even Boris Johnson admits that he was a racist. He was someone who believed that the white ‘race’ was superior, the natives didn’t have any right to their lands in the Americas, the Indians were a ‘ghastly people‘, and just was a general imperialist racist. He was extreme for his time.

Is there any way that we can say, because those were the views of their time – and the fact that he actually achieved something which saved, defended, protected our nation, means that we can separate those things out?

But if Reid was expecting that to calm the debate, she was sadly mistaken.

Andrews hit back with a blinder that left Morgan’s jaw on the studio floor:

Well, that’s the Jimmy Savile defence, isn’t it? ‘It was just a bit different back in the day.’

Andrews had clearly hit a nerve. So to put the former News of the World editor at ease, the professor changed tack:

Well let’s make a better comparison. At the time, Leo Amery – the secretary of India, not an antiracist – actually said that Winston Churchill’s views were so extreme on India that he couldn’t separate them from Hitler’s.

And the truth is that Hitler was a great military leader, a product of his time, and if they won the war, we’d be having this discussion now.

Many still consider Churchill to be the greatest Briton of all time. But even the most fanatical patriot would look on the statesman’s darkest hours in disgust.

Academics credit Churchill’s racist policies with causing the Bengali Famine that killed at least three million Indians. The former PM backed Hitler’s supporters in Greece during World War II. His ideas around Jewish and Black people are stomach-churning. He also declared in one memorandum that he was “strongly in favour of using poisoned gas” against what he called “uncivilised tribes”. And in 1935, Churchill even expressed “admiration” for Hitler’s “courage” and “perseverance”.

So why does Piers Morgan refuse to face the facts?

There was a clue later on in the debate; he had the front to ask Dr Andrews, a British citizen, why he doesn’t just get out of the country if he doesn’t like racism.

It’s that kind of question that tells you everything about Morgan’s fragile world.