More than one homeless person dies each day in the UK, 'tragically failed' by the Tories - The Canary 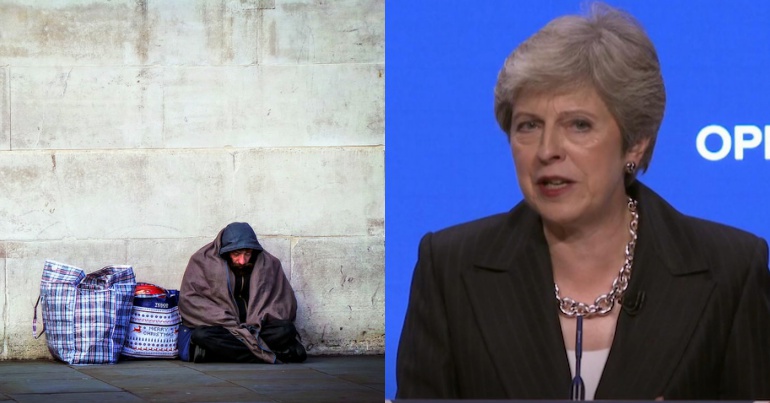 A shocking investigation has found that, in just 12 months, “at least 449” homeless people have died in the UK. Labour leader Jeremy Corbyn said “these people were tragically failed by this Tory Government”.

A report by the Bureau of Investigative Journalism revealed that:

At least 449 people… have died while homeless in the UK in the last 12 months – more than one person per day.

The Bureau found that “no official body counted the number of homeless people who have died” and thus set out to compile “a first-of-its-kind database”. Following this investigation, the Office for National Statistics will now start recording homeless deaths.

Just as important as recording these missing numbers was recording the names of these people and telling their stories. These are not just statistics. They are real people:

some as young as 18 and some as old as 94. They included a former soldier, a quantum physicist, a travelling musician, a father of two who volunteered in his community, and a chatty Big Issue seller.

It gathered the stories and names of the people recorded:

At least 449 people have died homeless in the UK in the last year (Oct 2017-18). This includes a father of two, an avid gardener, a quantum physicist, a 19 year old and an 81 year old man sleeping rough #makethemcount pic.twitter.com/B0hVqyWHej

Sadly, more than 449 people are likely to have died. But the Bureau‘s report shines a light on the shocking truth about homeless deaths in the UK:

Some were found in shop doorways in the height of summer, others in tents hidden in winter woodland. Some were sent, terminally ill, to dingy hostels, while others died in temporary accommodation or hospital beds. Some lay dead for hours, weeks or months before anyone found them. Three men’s bodies were so badly decomposed by the time they were discovered that forensic testing was needed to identify them.

They died from violence, drug overdoses, illnesses, suicide and murder, among other reasons. One man’s body showed signs of prolonged starvation.

As Corbyn said, the Tories “tragically failed” each and every person:

This investigation revealed the true scale of the UK’s homeless crisis. Because people rough sleeping “only give a partial picture of the crisis”:

Since 2010, the number of people sleeping rough in the UK has risen 169%. But the number of ‘hidden homeless‘ people is also soaring. In 2017, 15,290 households were counted as statutory homeless – these people have a statutory ‘right’ to be re-homed. But there are simply not enough houses. By 2020, over 1 million households risk becoming homeless “because of rising rents, benefit freezes and a lack of social housing”.

This important investigation lays bare the true brutality of our housing crisis. Rising levels of homelessness are a national disgrace, but it is utterly unforgivable that so many homeless people are dying unnoticed and unaccounted for.

pass almost unnoticed… like leaves falling from a tree and they’re gone.

It’s an important point. Because we should all know about Valerie Collins:

Valerie Collins died in Peterborough. A mother and grandmother, she had made a small garden of potted plants outside local shop entrances to cheer the place up. Her body was found in a car park #makethemcount pic.twitter.com/JP0bo4lP9N

Hamid Farahi was a quantum physicist who fled the war in Iraq – and was shortlisted for a job as Stephen Hawking’s graduate assistant. Suffering from PTSD, he ended up living in a Tesco car park, but moved into a shelter as the weather got colder, where he died #makethemcount pic.twitter.com/Re2DIR5xNS

Using the hashtag #MakeThemCount, people have been sharing stories and names of other homeless people.

Each and every one of them is so much more than a statistic:

@DavidTovey1975 says: “It could have been me”. In Scotland I heard about Robert, who had a wonderful singing voice, Linda, whose workers said her death was “a particularly sore one…What do we need to do to save lives like these? #makethemcount https://t.co/TEoDKhHCav

Heartbreaking figures released by @TBIJ show that at least 449 people died while homeless over the last 12 months: https://t.co/E9K1qWRVYt This is a wake-up call that homelessness is a national crisis that we must commit to ending in all its forms. #MakeThemCount #EndHomelessness

Each person who died this year had stories to tell, so much to offer. When I asked for info about these men and women one worker told me “It’s just nice someone is asking. Too often you go to another funeral and that’s it.” #Makethemcount https://t.co/Nc0x3jOQiA

Corbyn’s right. The Tories have “tragically failed” too many people. Even one death of a homeless person is one too many.

But there’s no sign of May’s government addressing the deep cracks in society that created this crisis. So we need to work for a change of government. And in the meantime, the very least we can do is honour each and every person who’s died, and care for each other in our communities. Right now, that’s the most powerful thing we have.

– Also, read about and honour the 449 homeless people in the Bureau report.