After last night, the BBC's impartiality guidelines aren't worth the paper they're written on - Canary Workers’ Co-op 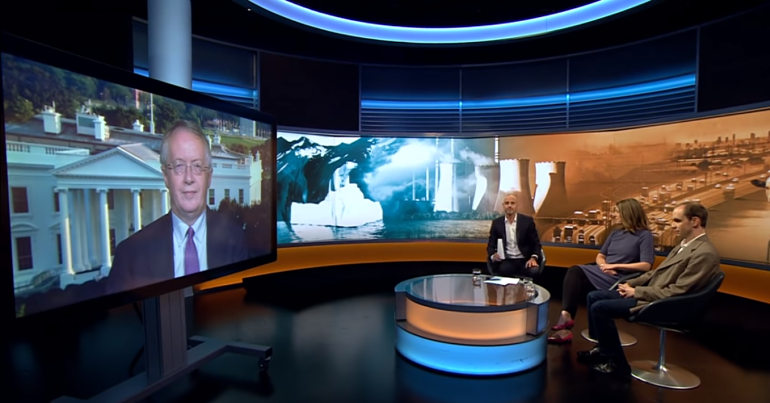 After last night’s performance, it seems increasingly like the BBC‘s impartiality guidelines simply aren’t worth the paper they’re written on.

On 8 October, the UN Intergovernmental Panel on Climate Change (IPCC) announced that we have just “12 years to limit climate change catastrophe”. And to discuss this apocalyptic news, BBC’s Newsnight decided to invite climate-change denier and former Donald Trump adviser Myron Ebell. But according to the BBC’s own internal guidelines on reporting climate breakdown, “as climate change is accepted as happening, you do not need a ‘denier’ to balance the debate”.

The guidance also says that, “with appropriate challenge from a knowledgeable interviewer, there may be occasions to hear from a denier”. But ‘appropriate challenge’ is definitely subject to interpretation. Moreover, it seems that no other theory with a comparable lack of scientific proof is given so much airtime. And this is especially concerning given the severe consequences of climate breakdown.

Who is Myron Ebell?

Ebell is director of the Center for Energy and Environment at the Competitive Enterprise Institute (CEI), a right-wing thinktank based in Washington. In 2016, US president Donald Trump appointed Ebell to oversee the transition of the Environmental Protection Agency (EPA) and dismantle the previous administration’s climate policies.

Ebell’s thinktank is tied to massive funding from oil and gas giants including ExxonMobil and the American Petroleum Institute. And after Trump pulled out of the Paris agreement in 2017, Ebell claimed victory for his organisation, saying:

I think we have, to a large extent, finally prevailed through the actions of President Trump and his administration.

But Ebell differs from at least 97% of active climate scientists. First of all, he’s not a scientist. Moreover, he claims that global warming is:

well within the range for natural variability, and whether it’s caused by human beings or not, it’s nothing to worry about.

He has even suggested that, if the world was warming, it would be a good thing.

In September 2018, an internal email revealed that the BBC was “offering all editorial staff new training for reporting on climate change”. It admitted that:

climate change has been a difficult subject for the BBC, and we get coverage of it wrong too often.

But after Newsnight invited Ebell, these words appear empty: because the BBC is still getting it totally wrong. Not only is a climate change denier unneeded to “balance the debate”, the BBC is also obliged to tell viewers who funds its guests. This way, viewers can know if climate change deniers are funded by big oil companies, or cigarette packaging campaigners are funded by tobacco companies.

Ebell’s appearance on Newsnight was, unsurprisingly, met with anger. Journalist and environmental activist George Monbiot claimed “Nothing learnt, nothing remembered”:

September: BBC internal guidance states "As climate change is accepted as happening, you do not need a ‘denier’ to balance the debate."
October: @BBCNewsnight invites arch denier Myron Ebell to debate the IPCC report.
Nothing learnt, nothing remembered. https://t.co/lCeTYxNRHo

This is an appalling misjudgement. By giving time to climate-change deniers you make it harder for politicians to make good policy. Why, it's almost as if you do it deliberately. A really, truly disgraceful idea.

100 companies are responsible for 71% of greenhouse gas emissions – with coal, oil and gas companies taking the top 3 spots.

Some people will argue that Newsnight host Evan Davis interrogated Ebell well, but this is irrelevant. Because inviting Ebell to discuss climate breakdown is akin to inviting a flat-earther to discuss the latest space mission.

The BBC simply shouldn’t be offering a platform to, at best, conspiracy theorists and, at worst, corporate lobbyists. Licence-fee payers deserve so much better.

– Let the BBC know that it needs to improve its climate change reporting.

– The Canary actively invites its readers to question everything they read. So please follow the links we reference, and always search for more information if unsure. But if you believe in the importance of independent, grassroots media in the fight against corporate propaganda, please consider supporting us.