The DWP is slammed after it's forced to reveal that 10,000 ESA claimants have died - Canary

The Department for Work and Pensions (DWP) was recently forced to reveal that over 10,000 Employment and Support (ESA) claimants had died in three years. Now, the admission has been slammed by both Labour and SNP politicians.

In August, as Welfare Weekly first reported and then The Canary expanded on, the DWP was responding to a Freedom of Information request (FOI) from campaigner Gail Ward. She asked how many people on ESA and two other benefits had died between 2014 and 2017.

The DWP gave these figures: 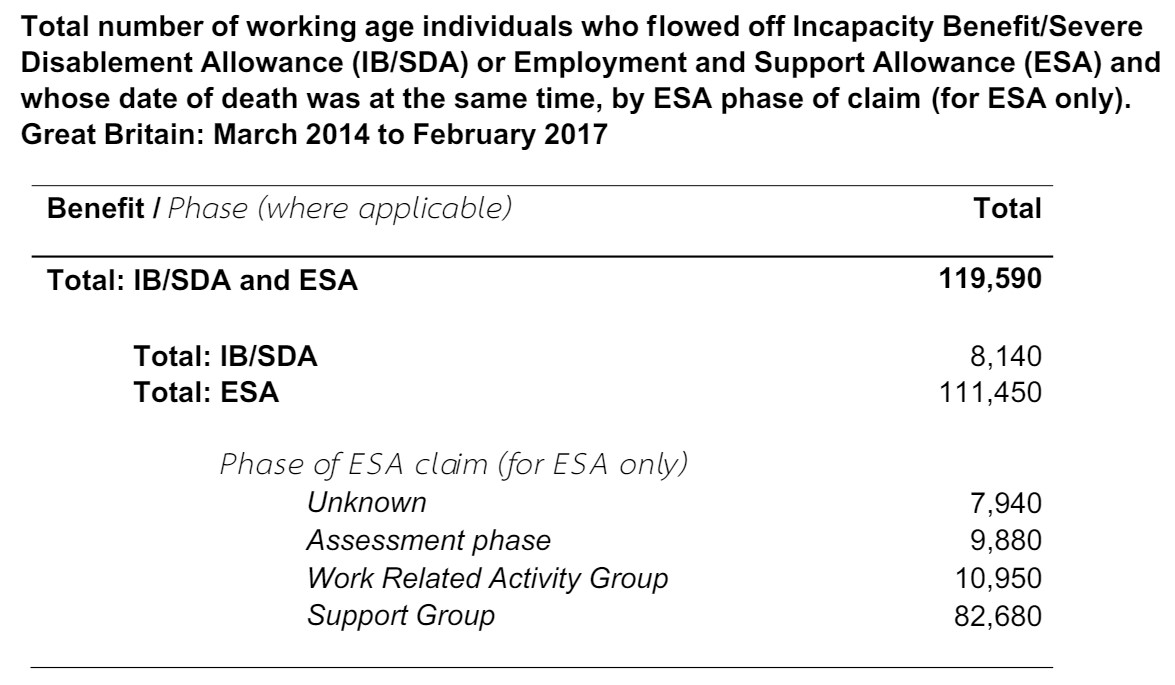 This amounts to around 10 people dying a day while in the Work Related Activity Group (WRAG) of ESA. But The Canary worked out this was a crude mortality rate of 7.7 deaths for every 1,000 WRAG claimants in 2016. This was an increase from 5.4 in 2012 and 6.2 in 2013. And versus the working age population as a whole, the WRAG crude mortality rate was over four times higher in 2016.

On Sunday 7 October, the Daily Record picked up on the deaths.

The mainstream media on the case?

Its story had the headline Tory cuts to lifeline benefits blasted as ’36 sick Scots a month DIE after being ordered to work’. As it said, this was after the DWP:

told [them] to prepare for employment…

The [WRAG] group is for people who have been given a Work Capability Assessment and deemed to have the potential to return to a job at some point.

But the tests have been heavily criticised for removing vital finance from claimants clearly incapable of work.

The DWP has said that “it would be inaccurate to assume any causal effect from these figures between the benefit and the number of people who have sadly died”.

But now, politicians have spoken out.

Labour and the SNP say…

Across Scotland, thousands of people are suffering from years of Tory cuts to lifeline benefits such as [ESA].

Thousands of people have been put through the stress and indignity of unnecessary re-assessments, with more than 10,000 people dying whilst trying to prove they were ‘not fit for work’.

It is imperative that time is called on the Work Capability Assessment. It’s clear the Tories shameful and disastrous welfare policies are making life even more difficult for thousands of people, as well as pushing people into debt and crisis.

The Scottish government even said:

It is clear that the UK Government’s… welfare changes continue to hit the most vulnerable in society the hardest.

The Scottish Government has long expressed its concern about the work capability assessment and that many people have been treated in an undignified and unfair way, forcing disabled people and people with chronic health conditions back to work.

Why have so many died?

As The Canary originally said about the DWP’s admission:

Deaths in the Support Group could be expected, as the claimants are often severely ill. But what’s of concern is the number of deaths in the… (WRAG) – the part of ESA where the DWP places people aged 16-64 who it deems can start moving towards work.

It is impossible to know why so many WRAG claimants were dying, as the DWP does not do this analysis. But nor does it calculate the number of claimants who died after being declared fit-for-work. As such, these figures raise serious questions about whether some WRAG claimants should have been in that group… They also raise serious concerns about the treatment of claimants, and why so many people who the DWP deemed well enough to start moving towards work have been dying.

These legitimate questions still stand. But now, politicians may force the DWP to finally offer some answers.