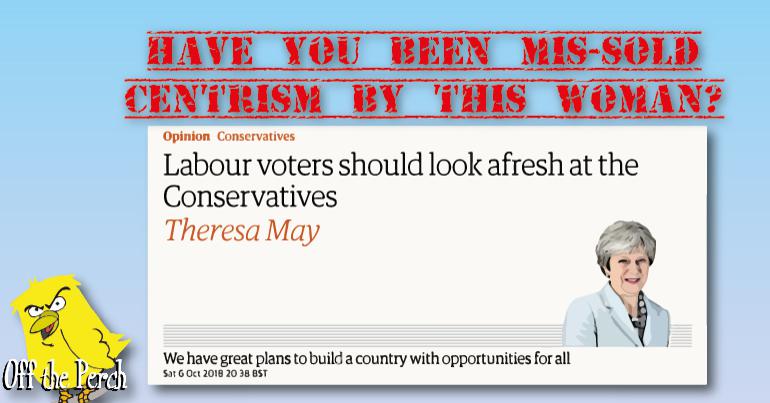 Theresa May is the UK’s most notorious defrauder of centrists. Although she’s always loved a bit of it, she’s been defrauding the political centre on a grand scale since 2016. Despite that, no one at the Observer recognised her when she walked into their offices:

The geniuses at the Observer didn’t just give May a column – they put her on the front page:

Christ this is embarrassing. The PM giving a press release comment piece (which is basically her conference speech) makes the Observer’s front page. Look like plonkers. pic.twitter.com/2bJs85oSqm

According to a cleaner at the Observer offices:

I was getting on with my job when I saw that famous political conwoman walk in. I went up to the paper’s editor and said, ‘That’s her – that’s the woman who conned all them voters into thinking she was the moderate option!’

I had a picture and everything, but this editor says, ‘Don’t be silly. This conwoman you’re showing me isn’t wearing a hat, and the person we’re about to interview clearly is.’

Once in the Observer offices, May penned an article that promised:

Despite this obvious embarrassment, the Observer has stood by their ‘journalism’. This was doubly embarrassing, as May had swiped their trousers – leaving them standing there with their underpants on show.