As anti-fracking protesters begin jail sentences, a week of action is showing resistance is alive and kicking - Canary 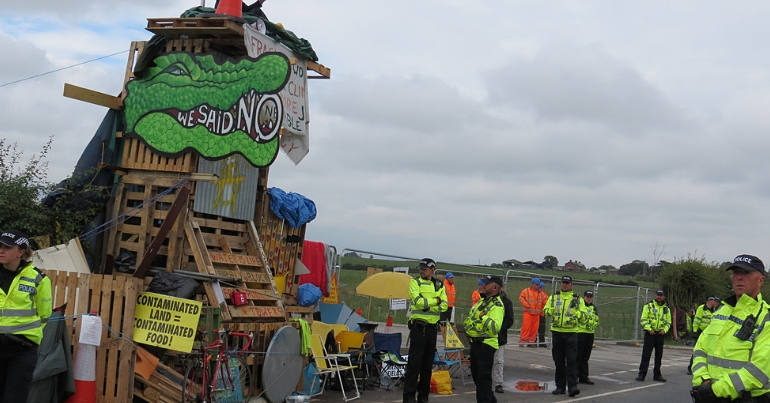 Fracking company Cuadrilla may be hoping that the recent jailing of anti-fracking activists will mean others will be deterred from protesting its operations. But at the moment, it’s looking more like a spur to action.

At Preston Crown Court on 26 September, a judge sentenced Simon Roscoe Blevin and Richard Roberts to 16-months in prison for their part in blockading lorries at the Preston New Road fracking site. Rich Loizou received a 15-month sentence, while a fourth man, Julian Brock, (who’d already spent three months in prison on remand) received a 12-month suspended sentence. The three imprisoned men are planning to appeal against their sentences.

But their sentences – described by their solicitor as “manifestly excessive” – have not put other people off protesting. On 7 October, hundreds of people marched to HMP Preston, where the men are being held, to show their solidarity:

Great to see the Anti-Fracking Protesters our in force in Preston, today! ✊? #FrackFreeFour pic.twitter.com/RSF6hDKtPC

And a crowdfunder set up to help with legal expenses and the costs of prison visits has already raised almost £13,000.

WOW, we are half way to our target!! Thank you so much to everyone who has supported the #FreeTheThree crowdfunder on @Chuffed. Please keep sharing and chip in if you can… We can do this!! #FrackFreeFour #Frackinghttps://t.co/5ybK6XCWRo … pic.twitter.com/JzxNN115Tu

The government is currently running a consultation on whether fracking operations should be classified as ‘permitted development‘. That would mean fracking would be treated like building a home extension, and would no longer need planning permission, an environmental impact study, or any kind of local accountability.

The consultation ends on 25 October. So before it does, campaign group Fossil Free UK is running a week of action from 8-14 October, with activities taking place around the UK.

First fracking since 2011 to start next week – or maybe not

Cuadrilla announced on 5 October that it planned to begin fracking at the Preston New Road site the following week. This would be the first high volume fracking operation in the UK since 2011.

However, a local campaigner won an interim injunction against Lancashire County Council on the grounds that measures in place to deal with an emergency at the site are inadequate. This means that Cuadrilla cannot start work at the site before the case is heard by the High Court, probably on 10 October.

Meanwhile, Frack Free Lancashire is digging in for the resistance, and inviting people to come to Preston New Road on 20 October to join in its ‘No to fracking/Until we win’ event.

Three people are in jail for obstructing fracking. But there are many, many more who will continue to resist this climate-destroying industry. Cuadrilla, and other fracking companies, should not sleep easy.

– Write to the prisoners.

– Complete the consultation on fracking. Use these guidelines from Frack Free United.

– Take part in the Fossil Free UK week of action

– Support Frack Off, and find out what’s happening in your area.