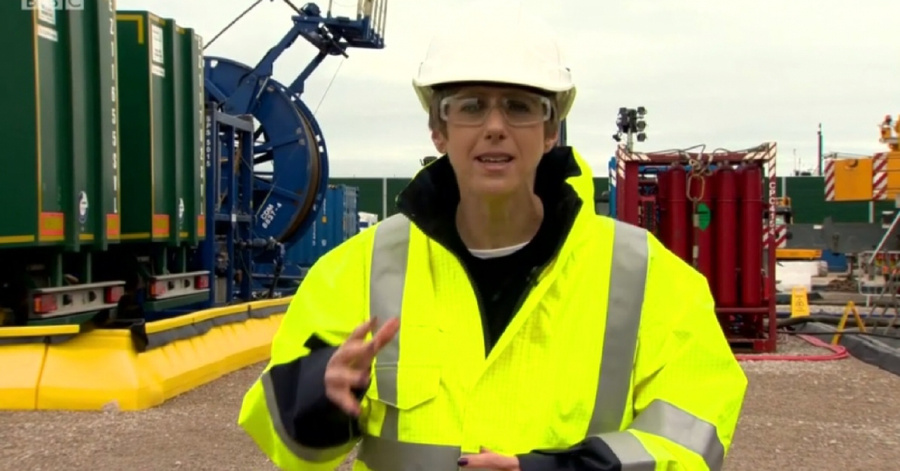 The BBC‘s latest report on fracking views like a press release from gas company Cuadrilla. BBC News ran a 2 minute 28-second fracking segment. But it ignored key reasons for the massive opposition to fracking in the UK. As did another 1 minute 12-second ‘tour’ of Cuadrilla’s fracking site.

I spent the day inside the @CuadrillaUK Lancashire #fracking site which is the first of its kind in the UK. Here’s a tour – https://t.co/7WR7kmzfDf

People took to Twitter to denounce the poor coverage:

Cuadrilla will be pleased by 6 o' clock news report – no searching questions, no mention of climate change. Why do you allow them to get away with saying fracking is just using water @BBCNews @JudithMoritz? This type of claim needs challenging, #misleading info on primetime news.

@SkyNews, @BBCNews and others need to rebalance reporting on #fracking. #fossilfuels have an unlimited cheque book with which to force an unwanted, polluting industry on unwilling communities. #MSM reporting could be mistaken for industry infomercial – shameful#FactsMatter ? pic.twitter.com/U1ZgXVCLTZ

The BBC fracking report didn’t mention climate change or man-made global warming. Nor did it cover the role fracking plays in releasing large amounts of methane, which accelerates climate change:

.@BBCNews .@BBCr4today .@BBCSussex .@BBCBreaking get your sorry act together, be professional & do your job. Stop your bias towards the fossil-fuel lobby. #ClimateChangeIsReal so report it properly, including everything which exacerbates it, such as methane leaks from #Fracking! https://t.co/SGi7GNkY35

Hi Judith: Climate scientists e.g at @TyndallManc say 1. that #fracking is incompatible with UK meeting its climate commitments, & 2. we must urgently & rapidly reduce gas consumption (alternatives exist).@TomClarke_ITV & @alextomo both highlight 1.
Why no mention of 1. by #BBC?

But the BBC also missed these important facts:

The Tories have gone #fracking mad; who will the MSM blame for the tremors & environmental and health problems this creates? Get a @uklabour government now & stop this fracking madness #GTTO @bbcnews @itvnews

It also failed to mention the fact that central government overturned a decision by the local council in Lancashire to ban fracking. Meanwhile, Scotland has banned fracking indefinitely:

The public's opinion doesn't matter to the Tory government anymore(If it ever did) as long as they can make a buck on the side for their private interests or friends. BBC News – Fracking at Lancashire site to begin next week, Cuadrilla says https://t.co/KlJLQtXW0D

BBC News – Injunction seeks to halt start of fracking at Lancashire site https://t.co/808O0TnwnG
This whole situation only exists because of an undemocratic overturning of the will of the people, just so that a handful of politicians in London can have a fourth holiday home?

The prison sentences imposed on three peaceful anti-fracking campaigners were ignored. So were the increasingly violent tactics of the police targeting protestors. The fact that opposition to fracking is consistent, informed, widespread and diverse wasn’t even covered.

All in all 5 October was a good day from Caudrilla’s perspective. That is until the High Court granted a temporary injunction at the last minute:

Well this is embarrassing for @CuadrillaUK… Within hours of heralding they were ready to frack in Lancashire, an interim High Court injunction over safety concerns means that they cannot yet begin #fracking after all. https://t.co/LJkhYPJ3lY #DontFrackLancs pic.twitter.com/5znsTADgYY

This report was nothing better than an infomercial for the fracking industry. We can and must demand better from our public service broadcaster.

– Watch the free documentary Power Trip about why local residents decided to upend their lives and opposing fracking in Lancashire.

– Read the detailed report published by DrillOrDrop on 5 October, the same day as the BBC fracking report and compare the coverage.

– Also see The Canary‘s other coverage of fracking.

– If you appreciate the work we do, then please share it and please also consider donating to The Canary.