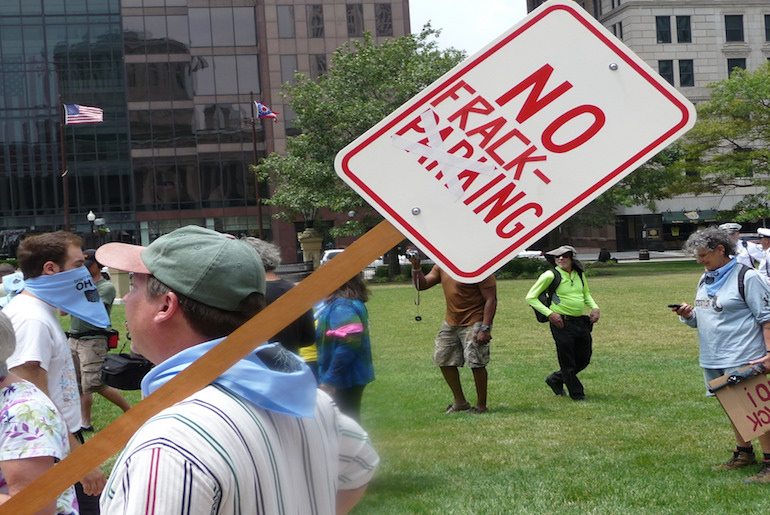 Fracking has finally been proven to contaminate sources of drinking water in a small town in Wyoming. Will this lead to tighter regulations for the oil and gas industry?

The State of Wyoming is rich in fossil fuels, and fracking has been taking place there for decades. In 2013, Wyoming produced more than two million cubic feet of natural gas.

But in 2008, residents of Pavillion, a small Wyoming town with a population of less than 300, started complaining of illnesses and an unusual smell and taste in their drinking water that they believed was due to fracking…

Hundreds of millions of years ago, prehistoric plant and animal remains settled into swamps alongside sand, silt, and rocks. These remains were buried by layer after layer of silt and sedimentary rock, covering the organic matter so that it could not rot away. Over time, increasing pressure and temperature ‘cooked’ the organic matter, turning it into the useful fossil fuels of today.

Fossil fuels are typically buried 5000 – 8000 metres underground, although sometimes they are found at shallower depths. To get to them, a controversial technique called fracking – or hydraulic fracturing – is sometimes used.

Fracking, invented in 1947, involves the high-pressure injection of a liquid that contains sand, thickening agents and other chemicals, to create cracks in deep-rock formations so that fossil fuels can be released.

Toxic chemicals such as benzene are used in fracking fluids – this sweet-smelling hydrocarbon has a bad rep, and rightly so. Long-term exposure to benzene can cause cancer and a type of anaemia caused by bone marrow damage. It may also affect fertility in both men and women, and harm developing foetuses.

Methanol, a chemical used in the fracking process in Pavillion, causes permanent nerve damage and blindness if consumed in sufficient quantities. Residents of Pavillion were certain that the fracking taking place in their town was responsible for their tainted water. If methanol was found in the Pavillion water source, it would be the proof needed to confirm fracking fluid contamination.

The problem with testing for fracking chemicals is that commercial labs don’t generally analyze them. They often degrade quickly to only trace amounts by the time they are tested. Most analytical labs in the US can’t test to the required detection limits.

For the residents of Pavillion, a new method was needed to get the proof they needed that fracking was affecting their drinking water.

Fracking has been a source of controversy for decades. It’s been highly publicized by films such as Promised Land, and the documentary Gasland, which explored the dangers associated with fracking. And it’s hard to forget, whether real or not, the flaming water tap video, popular a few years ago.

The documentary FrackNation was released soon after Gasland, to address concerns and some of the inaccuracies reported about the fracking process. It highlighted the fact that fracking is a complex process and may affect different areas in different ways, but didn’t address every concern.

Are agencies being blinded to the pollution caused by fracking, due to the US’s current promotion of natural gas? Is there too much pressure on the oil and gas industry?

Let down by the EPA

Pavillion, Wyoming, has been a high profile case. Water testing started in 2009 when the local EPA office responded to complaints from residents. As reported by Scientific American, the testing resulted in a new technical team being formed. Tests and retests were performed, finding benzene and other toxic chemicals in the monitoring wells. But there were collisions between agencies and industry, and disagreement over the testing methods used.

One of the lead scientists, Dominic DiGiulio, penned a highly controversial 2011 EPA draft report about the research, citing that fracking chemicals were migrating to domestic water sources.

But suddenly, in 2013, the EPA backed out of Pavillion, transferring the investigation to State regulators without publishing a final report. In 2015, the State regulators published only inconclusive draft reports, asserting that groundwater is generally suitable for people to use.

Luckily for the Pavillion residents, they had an angel in their midst in DiGiulio. He took the issue into his own hands and published the outcome of his results last week in Environmental Science & Technology, showing that fracking operations in Wyoming “have had clear impact to underground sources of drinking water and domestic wells”.

DiGiulio retired from the EPA in 2014, and is now a visiting scholar at Stanford University. But while DiGiulio had been working for the EPA, he and his colleagues developed a new method for looking at traditionally difficult-to-detect trace chemicals using high-performance liquid chromatography. Even after he left, Digiulio was able to obtain the data from the EPA from this testing method, thanks to a Freedom of Information Act, and created the peer-reviewed report from the findings.

He was angry at the EPA for walking out on the residents of Pavillion. The decision to walk out “wasn’t made by any of the scientists”, he has stated.

DiGiulio and his team at Stanford University found traces of methanol and other fracking chemicals in data from monitoring wells, finally proving the link between fracking and drinking water contamination in Pavillion.

Since the samples contained diesel compounds, most of the contamination is thought to have come from old, unlined pits of fracking fluid waste, stored close to fracking sites. These pits didn’t have to be lined prior to the 1990’s. However, other compounds were likely to have come directly from upward flow of groundwater in the basin, suggesting fractures in the wells, and wells that are too shallow.

The fracking sites still need more research, and more monitoring wells need to be examined. As DiGiulio states, “we are saying the data suggests impacts, which is a different statement than a definitive impact.” He goes on to say, “We are saying the dots need to be connected here.”

More research is needed. But residents of Pavillion can finally move forward. The research paints a clear picture of unsafe practices in the fracking process and could have impacts on oil and gas regulations in the future.