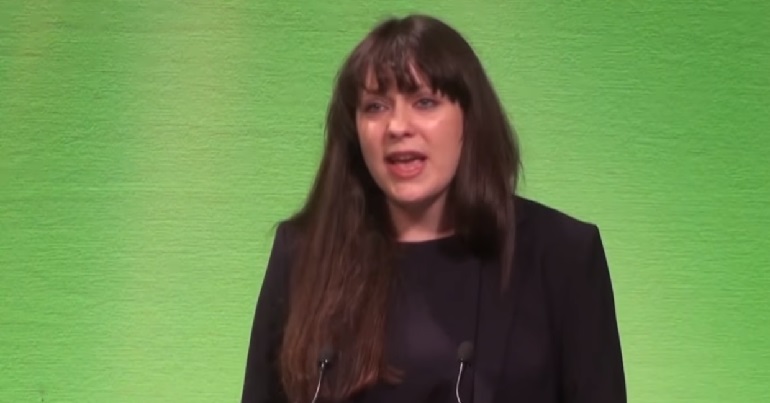 The Green Party of England and Wales is meeting in Bristol this weekend for its autumn conference. Most of the attention has been on policy announcements made by co-leaders Jonathan Bartley and Sian Berry. But the party’s deputy leader, Amelia Womack, stole the show with her speech.

Pay inequality was central to Womack’s speech. She hit out against current laws on pay which allow employers to pay young people less than their older colleagues. She condemned a situation which she claimed has led to:

A generation of young people who still do not receive equal pay.

She continued by announcing a commitment to overturning this inequality:

So today, I am proud to announce our policy of equal pay for everyone under 21. We want to build a working environment that is fair for everyone. We have to make sure that things are fair in people’s first jobs.

So if you are under 21, the Green Party promises you won’t lose out because of your age. And we promise you equal pay for equal work.

But she didn’t just speak out on the minimum wage for workers. She also rallied against pay injustice for apprentices:

Concluding her comments, she made a powerful challenge to what she dubbed “the political class”:

It is time that the political class woke up to the value of investing in training and apprenticeships, to the hardships faced by young people today, and to the realities of pay inequality in Britain.

Pay inequality wasn’t the only focus of Womack’s speech though. She also hit out at inaction on climate change. She detailed  the scale of the challenge we currently face:

This summer, fires were burning in the arctic circle. Floods washed away homes in India, storms raged around the world. You’d have to be wilfully ignorant to not see that climate chaos is upon us.

And she went on to argue that the Green Party is the only political party that has the radical and holistic solutions necessary to tackle environmental problems:

The Green Party is needed now more than ever before. Because only we truly recognise that whilst our individual choices make a difference, it is deep seated, structural change that will deliver a safe, green and just future.

But Womack didn’t claim the Green Party can make change on its own. Instead, she described the party as a wider ecosystem of social and political movements. In doing so, she expressed solidarity with the three anti-fracking protesters currently imprisoned:

Just eleven days ago, three activists were imprisoned for taking on the destructive fracking industry. I want to thank them for their fearless and principled actions.

I want to tell the government that like the suffragettes, these people are the heroes of this story. We cannot wait another 100 years before we recognise that those on the front line of environmental destruction are freedom fighters, not criminals.

You can watch the full speech here.

Womack’s speech has gone down well among the party faithful, with members taking to Twitter in praise. One member tweeted:

Another member said that it was “impossible not to get inspired” by Womack. They also showed that the main hall was so packed, people at the conference had to watch the speech on a screen from an overspill room:

Absolutely full room at the #gpconf fir @Amelia_Womack speech. But revolution will be televised anyhow and it's absolutely impossible not to get inspired by her, no matter what medium pic.twitter.com/J2KrluzlXW

And she also got high praise from the Green Party’s MP Caroline Lucas:

"Those on the frontline of environmental destruction are freedom fighters, not criminals. We must ban fracking and free the three" – brilliant speech from our activist Deputy Leader @Amelia_Womack #gpconf

Womack is making waves in the Green Party. If she continues to deliver speeches like this one and can translate that into support for the party, she could grow to be a powerful force for change in politics.

–  Read more articles from The Canary about the Green Party.