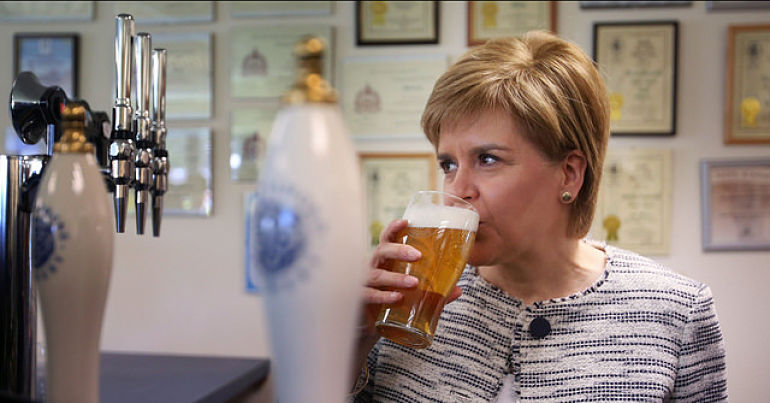 Scotland’s first minister Nicola Sturgeon has played a blinder on Twitter. She took down Scottish Liberal Democrat leader Willie Rennie with just one tweet. Rennie said Sturgeon should be pursuing a People’s Vote not “another unwanted independence referendum”. But Sturgeon had a stunning clapback:

You’re gonna need an ice pack for the burn, Rennie.

The Scottish Lib Dems continue to support a second referendum on EU membership, but oppose one on Scottish independence. Just try and get your head around that one.

Scottish politics is at boiling point – it is “stuck between two referendums”. The Scottish electorate rejected independence from the UK in 2014 but voted overwhelmingly to remain in the EU in 2016. The Better Together campaign, which campaigned for Scotland to stay part of the UK, was widely criticised. Particularly when it claimed that for Scots to keep their EU citizenship, they had to vote to stay in the UK:

What is process for removing our EU citizenship? Voting yes. #scotdecides

Look how that turned out.

Sturgeon’s takedown of Rennie follows pressure from Green Party leader Patrick Harvie for clarity over the timing of another referendum on Scottish independence. He also stated his party’s commitment to a People’s Vote. And Harvie pointed out that both the Scottish Conservatives and Scottish Labour failed to bring up Brexit during First Minister’s Questions on 17 January.

He accused the UK-wide parties of trying to avoid talking about the “biggest political crisis for generations” at Westminster:

Sturgeon states she will provide details on the timing of Indyref 2 in a “matter of weeks”.

Scotland is in limbo. But there is hope. When Sturgeon sounds the klaxon on Indyref 2, Scotland can start having a different conversation. One about its aspirations and what type of relationship it wants to have with the EU. One that is a million miles away from the conversations of the past two and a half years. And it could be the end of Scotland’s democratic deficit, which has been so apparent during the Brexit process, in the disUnited Kingdom.