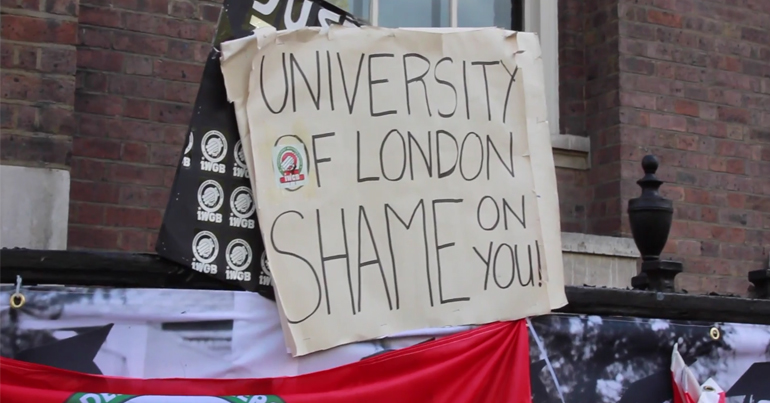 A major graduate conference has moved away from the University of London (UoL). It’s the latest in a series of moves to boycott the institution for its stance on the rights of outsourced workers.

On 16 January, London 19th Century Studies tweeted that it was moving its graduate conference from UoL to Queen Mary University of London. It said this was “due to the current boycott of [UoL’s] Senate House“:

🚨UPDATE🚨 Due to the current boycott of Senate House organised by @IWGBUoL, we have moved the @LondonC19 Graduate Conference to Arts Two Lecture Theatre, Mile End Campus at @QMUL. The programme will remain the same. #boycottsenatehouse More info: https://t.co/wxLcyVHiiw pic.twitter.com/M6FMqEvbtW

Outsourced workers are leading the boycott in collaboration with grassroots union Independent Workers of Great Britain (IWGB). It means people and groups have pledged “not to attend or organise” events at UoL until the workers’ demands are met. They’re asking for the same pay and conditions as other directly employed staff. At present, outsourced workers “have worse sick-, maternity- and holiday-pay… as well as smaller pension contributions”.

UoL reportedly made £43m from venue hire in the year ending July 2018.

Outsourced workers carried out a two-day strike in April 2018. Industry magazine Employee Benefits reported that, as a result, the UoL agreed to end outsourcing. IWGB at the time was cautious due to a “perceived lack of clarity” in UoL’s statement.

As Freedom News explained, the university ultimately only agreed to bring certain outsourced roles in-house. That change will happen this summer. Maintenance, cleaning and catering staff will, however, remain outsourced. Because of this, the worker- and IWGB-led Boycott Senate House campaign began in December 2018.

More than 100 individuals and groups are named on IWGB’s boycott pledge page. They include professors from across the country, other branch unions, Labour and Green Party MPs, and public figures such as Ken Loach.