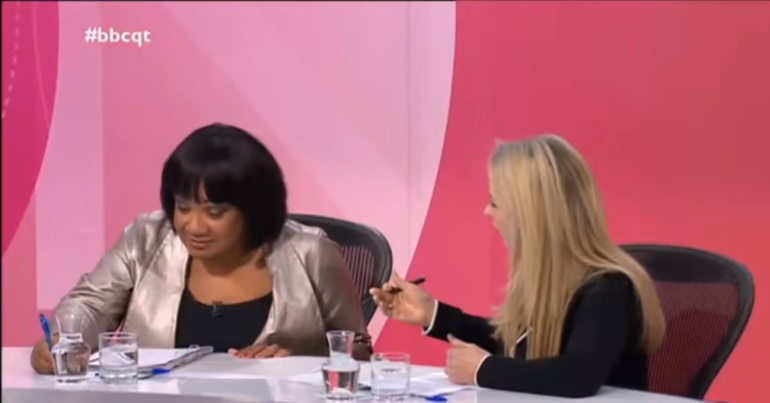 On 17 January, the supposedly unbiased BBC Question Time panel ganged up on shadow home secretary Diane Abbott, claiming that Labour was “way behind in the polls”. The show’s new host, Fiona Bruce, then joined the attack (led by right-wing columnist Isabel Oakeshott) to tell Abbott: “No, you’re behind Diane – definitely”.

But not for the first time, the BBC has been caught screening barefaced lies and political attacks without challenge. Though Abbott defended Labour – saying “we are kind of level-pegging” in the polls – it gets even worse for Bruce and Oakeshott. Because in most recent polls, Labour has actually been ahead of the Tories.

Grassroots campaign group Momentum set the record straight by showing that Labour is ahead of the Tories in three of the five major polling companies’ reports:

Journalist Owen Jones also called on Oakeshott and the BBC to apologise:

This is completely false – Labour are slightly ahead in the polling average, and in the last two polls are 2 and 3 points ahead – and it's made all the worse by @HackneyAbbott being ridiculed over it. Both @IsabelOakeshott and the BBC should apologise. pic.twitter.com/xyupJXGSOe

A woman in the audience, meanwhile, claimed that “the jeers against Diane Abbott were worse than could be heard on the broadcast”.

Novara Media co-founder Aaron Bastani highlighted the unequal treatment of Abbott when it comes to numbers:

Let me get this straight. When Diane Abbott ‘gets the numbers wrong’ it means everyone can mock her and tell her she shouldn’t have a senior job.

When a white lady is wrong about the polls, and another one inaccurately says she’s right, nobody mentions a thing

@BBCQT really should check facts, the information given out about polls last night was clearly false. Fiona Bruce was far too hasty, appeared to suggest Diane Abbott had no idea and that sort of mistake can be incredibly damaging in National TV.

So the god-awful Isabel Oakshott & Fiona Bruce both harangued Diane Abbott in saying Labour are behind in the polls.That is not true (see above) So maybe they should get their facts right before spreading fake news on the TV. No wonder we do not trust MSM journos anymore! #bbcqt

Complaint from last night's #bbcqt gone in on two issues 1) How Dianne Abbott was treated 2) The factually incorrect claim on the polls by Isabel Oakeshotte and Fiona not correcting her and repeating it. Won't hold my breath! pic.twitter.com/DWXJksbrxB

Independent media outlet Evolve Politics, meanwhile, said it had received no response from the BBC after confronting it with the facts:

The BBC is an utter joke.

We spoke to the BBC Press Office at 09:00 this morning. We emailed them at 09:17 with detailed proof that Fiona Bruce had lied.

Establishment journalists seemingly saw one poll putting the Tories ahead, and chose to forget the rest. This is cherry-picking at its most damaging.

If the BBC wishes to retain any credibility, it must stop broadcasting politically motivated lies.

Featured image via screengrab via I Am Incorrigible