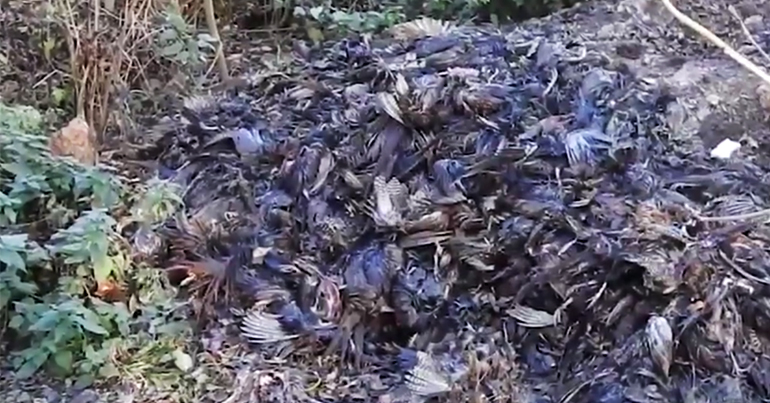 Video published by activists shows thousands of dead pheasants dumped into a mass grave. The gruesome footage exposes the shooting industry’s lies that it is a positive force for Britain’s countryside.

So many a digger is needed

On 17 January, the Hunt Saboteurs Association (HSA) published footage of a digger dumping dead pheasants into a mass grave:

Working together with @WestMidsSabs and Stop the Cull, we have exposed one of the shooting industry's dark secrets: the dumping of huge numbers of intensively reared pheasants, shot out of the sky for sport. #SabsOnShoots

It was captured at Cotesbach Game Farm in Leicestershire in November 2018 by the HSA, West Midlands Hunt Saboteurs and Stop the Cull. The HSA press release included an estimated 2013 statistic that 10,000 tonnes of pheasants are dumped annually. By comparison, estimates place the total number of pheasants released each year at about 40,000 tonnes.

Lee Moon, a spokesperson for the HSA, said:

This footage proves the lie that shooting has anything to do with conservation. Game birds are factory farmed in huge numbers purely to be shot in big bag shoots. Shooting is a bloodsport and nothing more.

Meanwhile, Cotesbach Game Farm defended itself saying breast meat had been removed from the bodies and that the practice is legal.

Even the industry sees a problem

The shooting industry has pushed a number of stories to promote its image. Patrick Galbraith, editor of Shooting Times, said in an iNews column that fewer pheasants can’t be shot because the industry:

is the lifeblood of rural Britain… as a society, we cannot afford for the industry to get any smaller.

But, at the same time, the pheasant industry has admitted that it has a problem with “surplus shot”. Columnist David Tomlinson said in Shooting UK that:

the root of the problem is over-supply, with too many shoots producing far too much excess game for game dealers to cope with.

As a result, the HSA’s recent footage has divided opinions within the shooting community.

Divided response to the latest footage

The BASC was swift to respond to the Times‘ publication of the HSA’s footage. In a letter written to the editor, published on 18 January, the group’s chairman Peter Glenser said:

The shooting community’s response to the awful footage must be unequivocal. … The perpetrator may have used a mechanical digger but such bad practice drives a coach and horses through the credibility of shooting.

On the other hand, Charlie Jacoby, a presenter for Fieldsports Channel, saw less of a problem:

This is not the first time people have exposed pheasant mass graves. For example, on 7 January, Welsh newspaper the Leader said about a hundred dead pheasants had been found next to a popular Mostyn coastal path. Walkers discovered the bodies soon after a local Boxing Day shoot. Meanwhile, the Gazette & Herald said on 27 December 2017 that hundreds of dead pheasants were found in Helmsley, North Yorkshire. They’d been put in sacks and dumped on the side of the road. Likewise, in 2015, the League Against Cruel Sports provided the Independent with images of a now familiar scenario. They showed “dozens” of pheasants being dumped into a pit at Polesden Estates, Berkshire.

Pheasants are born in awful conditions. In October 2017, Animal Aid showed the “cruel” factory farms used to rear the birds for shooting. After that, they appear to be given no greater dignity in death.

It’s clear the mass dumping of pheasants is common. Despite frequent condemnation from shooting bodies, the practice hasn’t changed. These barbaric actions, exposed again and again, undermine the industry’s claims that it is a positive force for rural Britain.

Featured image via the HSA