Four years on, UK arms sales are still propping up the Saudi-led bombing of Yemen - Canary 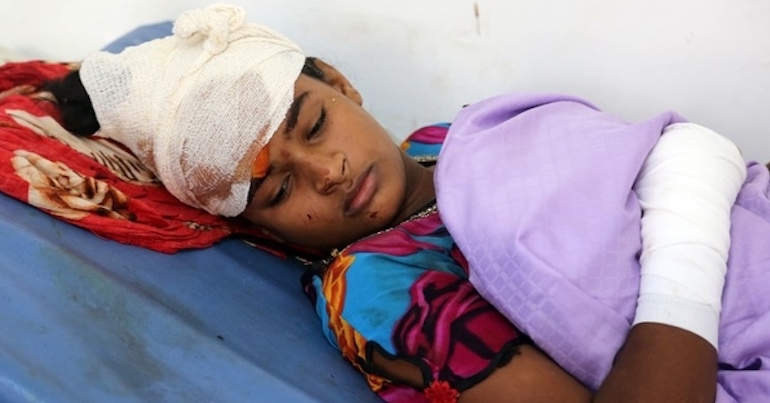 26 March marks “four years since Saudi-led forces began bombing Yemen”. Despite tens of thousands of deaths from bombs and thousands more from what the UN has called “the world’s worst humanitarian crisis”, war continues. Saudi Arabia has been leading an assault on Yemen since 2015. Yet it shows no sign of ending this brutal conflict: propped up with UK and US arms sales.

Campaign Against Arms Trade (CAAT) issued a press statement which stated unequivocally that: “The bombing of Yemen is only possible because of US and UK arms sales”.

Yet to ‘mark’ the anniversary, foreign secretary Jeremy Hunt defended those same arms sales. In an article for Politico, he claimed:

Some argue that Britain has contributed to the crisis because of arms sales to some of the participants. In fact we have some of the strictest arms control export guidelines in the world

But as CAAT reported, within these ‘strict guidelines’, the UK still “licensed £5 billion worth of aircraft and bombs to Saudi Arabia since… March 2015”. These figures may well be far higher because “bombs and missiles” are often licensed through “the opaque and secretive” Open Licence system. This makes it far harder to track arms sales.

CAAT also pointed out that the Court of Appeal will examine the “legality of UK arms sales to Saudi Arabia” in April.

This terrible war would not be possible without the political and military support of arms dealing governments like the UK. As the war enters its fifth year it has only become more urgent that they do the right thing, and finally end the arms sales.

In March, Yemen-based Mwatana for Human Rights released a report that examines the use of US and European arms by the Saudi-led coalition. It stated that “allies of western countries commit atrocities with western-supplied weaponry” and the US and UK have “accelerated arms sales because of the war”. The report notes that attacks between “April 2015 and April 2018 killed at least 203 civilians and injured at least 749”. It found evidence of US and UK arms in those attacks.

And yet Hunt insisted that “our [British] values require us to play our part” in this conflict. He continued:

We could halt our military exports and sever the ties that British governments of all parties have carefully preserved for decades, as critics are urging. But in doing so we would also surrender our influence and make ourselves irrelevant to the course of events in Yemen.

The humanitarian crisis in Yemen is the worst in the world. Tens of thousands of people have been killed. No matter how bad the situation has become, Jeremy Hunt and his colleagues have put arms company profits ahead of the rights and lives of Yemeni people.

As The Canary reported, thanks to a compliant media, 58% of Britons – according to a 2018 YouGov poll – aren’t aware of the UK’s role in this crisis. And only 2% claimed to “know a lot about the conflict in Yemen”.

Essentially, Hunt is defending nothing more than a profit-fuelled trail of death and destruction. The UK must stop all arms sales to Saudi Arabia, because Yemen can’t and shouldn’t face another day of war, yet alone another four years.