Watch a BBC host gaslight a Labour MP to the point where he smears his own party, live on air - Canary 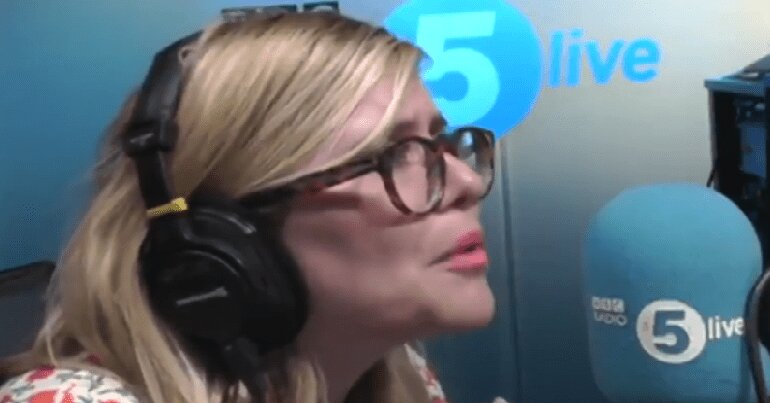 BBC Radio 5 Live host Emma Barnett effectively bullied Labour MP Lloyd Russell-Moyle to the point where he smeared his own party on 1 July.

In this instance, the corporate media gaslighting centred on MP Chris Williamson, who was recently re-suspended from the Labour Party. His case is now pending review.

How the gaslighting of the left works

Interviewing Russell-Moyle, Barnett launched a volley of attacks on Williamson, claiming that the MP has “approved… antisemitic remarks”. But Barnett’s examples related to Williamson calling out the well-documented weaponisation of antisemitism allegations against Jeremy Corbyn and the Labour membership. For instance, Barnett attacked Williamson for speaking at a play “called The Lynching“. She alleged that the title was antisemitic because it suggested activists were being falsely accused of antisemitism, which was like being “strung up by a tree”. Yet the BBC itself recently reprimanded Barnett’s own colleague – Radio 4 host Nick Robinson – for false antisemitism allegations against the creator of the play, Jackie Walker.

Kicked out based on innuendo

Williamson was originally suspended for a “pattern of behaviour”. But many Labour supporters have questioned the decision to kick somebody out of the party based on innuendo rather than specific antisemitic comments. Recently, 61% of LabourList readers said that the party should readmit Williamson, while 31% disagreed.

A report from academics at the Media Reform Coalition, meanwhile, previously concluded that corporate media reporting on Labour and antisemitism has been a “disinformation paradigm”.

The actual comments that triggered the MP for Derby North’s suspension are often lost under inflammatory rhetoric. Williamson said that Labour has been “too apologetic” in response to being “demonised as a racist, bigoted party”. Contrary to allegations, he did not deny that there is some antisemitism in Labour; indeed, he referred to the “scourge of antisemitism” in the same address.

Still, Russell-Moyle ended up swallowing the attack-line. Sounding like a hostage reading out a forced message, the MP for Kemptown said:

Labour MP @lloyd_rm changes his mind over whether fellow Chris Williamson MP has been anti-Semitic, after @EmmaBarnett read examples live on air.

🎙️“Why was that so hard for you to say from the beginning?”

The Labour leadership and its prominent supporters must do better

Antisemitism exists in Labour, as it does across society. But given that cases reportedly relate to 0.1% of the party’s 540,000-strong membership, the scale of corporate media hysteria is clearly a smear campaign. Since Corbyn became leader, the number of Labour voters agreeing with antisemitic statements has actually fallen significantly.

So the exchange between Barnett and Russell-Moyle only proves Williamson’s point: Russell-Moyle is another example of a Labour representative participating in the demonisation of their own party. Instead of calling out the smear campaign, Russell-Moyle unwittingly supported the attack through accepting its premises.

All minority communities (from Jewish to disabled people), along with the rest of the UK, will greatly benefit from the universal programme of a Corbyn-led government. So the Labour leadership and its prominent supporters must do better at dismantling the smear campaign. Because it impacts us all.