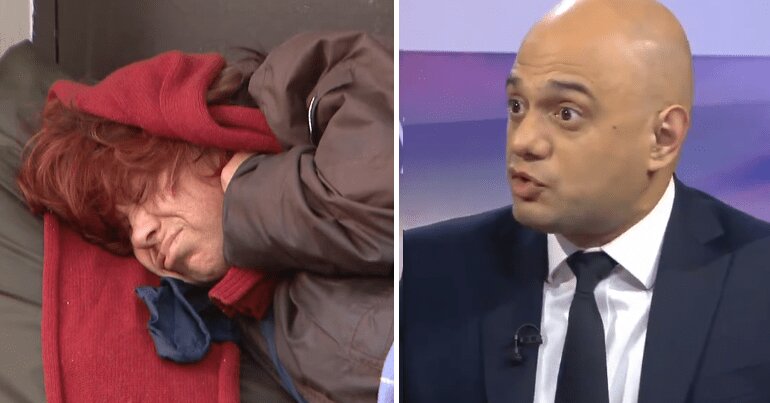 ‘Labour is responsible for homelessness’

But this is a blatant falsehood. While homelessness increased at the beginning of Tony Blair’s right-wing regime, Labour brought the number of homeless households down from 216,080 in 2004 to 115,430 in 2007. And contrary to Javid’s claims, the Conservatives have made the issue much worse. Since the party took power in 2010, rough sleeping has increased by more than 250%.

"It's Labour that was responsible for the massive rise of homelessness."

Chancellor @sajidjavid claims that the previous Labour government is to blame for the UK's rise in homelessness.

“They really do think we’re stupid”

Javid later told Channel 4 that he “misremembered the years”.

But by the looks of social media, people aren’t buying it:

Just thought we'd point out a few things that the media seem to be overlooking at the moment:

If you don't call them out on it, you look like you're in on it.

So many lies, today in the i Sajid Javid lies again. Is there no end to the lies, they really do think we’re stupid! pic.twitter.com/Muh7jMa4EW

Sajid Javid just claimed on Sky News homelessness has fallen by a half under the Conservatives! It’s the COMPLETE OPPOSITE of what’s happened! The Number of children that will be homeless this Christmas will be its highest in 12 years! How long will we tolerate these lies?!! pic.twitter.com/qblml3Cg9F

Labour has investment plans to solve homelessness, the rent scam, and the housing crisis. The party has pledged to build over 150,000 council and social homes per year, as well as redefining ‘affordable homes’ to match income in the local area. Presently, UK tenants hand over £50bn per year to private landlords in rent. The other option – buying a house – costs around eight times the annual average income. That means an average earner could buy their own house in eight years if they literally didn’t spend a penny on anything else.

Clearly the housing crisis is unsustainable and the homelessness crisis a moral outrage. The Tories seemingly have no defence for their record on housing other than to lie. It doesn’t have to be like this. Your vote on 12 December couldn’t be more important.