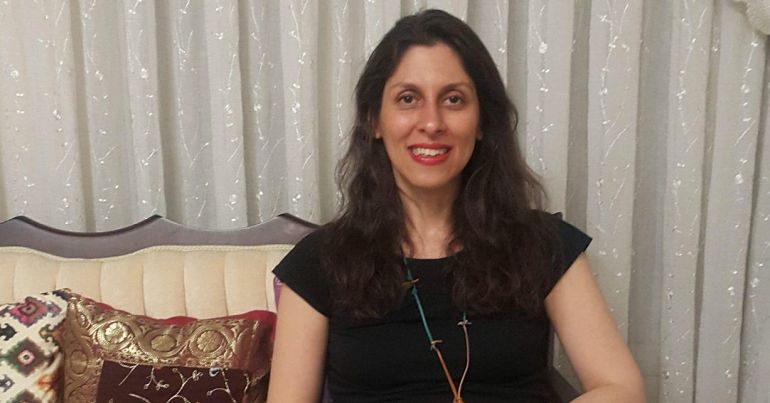 Nazanin Zaghari-Ratcliffe has expressed her relief at not being sent back to prison after appearing before a court in Iran, according to her family.

The 42-year-old British-Iranian dual national was told she would be returned to Evin prison in Tehran following Monday’s hearing, but it was adjourned before she could put forward a defence, her husband Richard Ratcliffe said.

She has been detained in Iran since 2016, when she was sentenced to five years in prison over allegations, which she denies, of plotting to overthrow the Iranian government.

Mr Ratcliffe said his wife was taken to court on Monday on charges of spreading propaganda against the regime, adding that the evidence presented was the same as when she was convicted in 2016.

The Prime Minister’s official spokesman said UK authorities did formally request to attend the hearing, but access was denied as Iran does not recognise dual nationality.

The mother of one, who has been out of prison on furlough since March due to the coronavirus crisis, is now back under house arrest at her parents’ home in Tehran, with no date for the next court hearing.

Following the trial, Mrs Zaghari-Ratcliffe told her husband she “kept imagining the face” of their young daughter Gabriella, adding: “I am so relieved to be back. You have no idea. I was so stressed out.

“There is no better place than home. I am glad to be home even if just for the time being.”

Her local MP Tulip Siddiq said it was “hard to imagine the mental torture” of being threatened with returning to prison.

“Nazanin’s safety is my top priority, and I urge the UK Government to make it their top priority too by stepping up consular support and efforts to secure her release,” the Labour MP for Hampstead and Kilburn added.

Foreign Secretary Dominic Raab said on Friday that Iran will undermine efforts to improve its relations with the UK if the mother of one is returned to prison.

Following the hearing on Monday, Mr Raab called the decision to begin a new case against Mrs Zaghari-Ratcliffe “appalling” and urged for her to be “returned home to her family”.

“The Iranian authorities have put an intolerable burden on Nazanin and her family,” he said in a statement.

“I am relieved she remains on temporary release, but she needs to be returned home to her family. We continue to make this clear in the strongest terms.”

On Thursday, Iranian ambassador Hamid Baeidinejad was summoned to a meeting at the Foreign, Commonwealth and Development Office (FCDO), where he was told of the UK’s “grave concern” at the development.

FCDO director-general for the Middle East Thomas Drew said the ambassador was told the move was “unjustified and unacceptable, and is causing an enormous amount of distress”, a spokesman said.

It has been claimed that Mrs Zaghari-Ratcliffe is being held to force the UK to settle on a debt dating back to the 1970s when the then-shah of Iran paid the UK £400 million for 1,500 Chieftain tanks.

After he was toppled in 1979, the UK refused to deliver the tanks to the new Islamic republic and kept the money, despite British courts accepting it should be repaid.

The Iranian authorities have denied any link between the debt and the imprisonment.

Mrs Zaghari-Ratcliffe was arrested at Tehran’s Imam Khomeini airport while travelling to show her young daughter to her parents in April 2016.

She was later afforded diplomatic protection by the UK Government, which argues that she is innocent and that her treatment by Iran failed to meet obligations under international law.