Tories, England's Euros win is not yours to claim - Canary 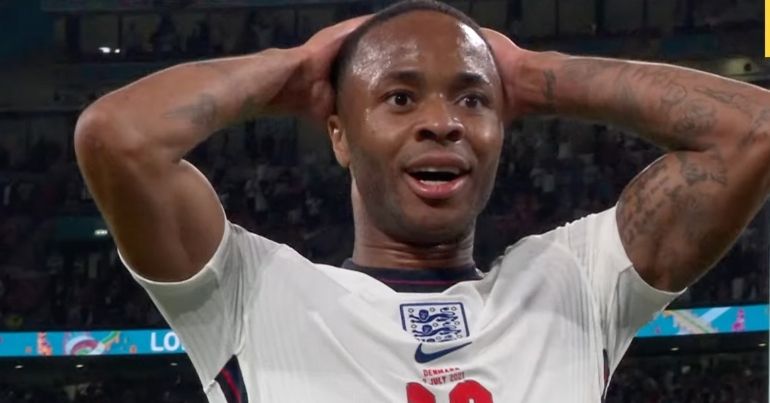 On 7 July, England‘s football team beat Denmark 2-1 during the Euro 2020 tournament, reaching their first major final since they won the World Cup in 1966. Prime minister Boris Johnson and home secretary Priti Patel were quick to claim the historic win in order to push their nationalistic agenda. But Twitter users soon pointed out the inherent hypocrisy of their celebratory tweets.

There’d be no England team without immigration

England’s historic win against Denmark coincided with the introduction of home secretary Priti Patel’s new immigration and asylum bill. The bill seeks to effectively criminalise anyone seeking asylum in the UK. If it passes, refugees entering the country via ‘unofficial means’ could face up to four years in prison. Moreover, from the partial deportation of the Jamaica 50, the attempted deportation of Osime Brown, the planned deportation of Anthonell Peccoo, and the Home Office’s failure to compensate the victims of the Windrush scandal, the home secretary has overseen vast swathes of unjust, xenophobic and discriminatory immigration decisions with zeal. In light of this, Jonathan Liew said:

The England team of 2021 is one that simply would not exist if Priti Patel had been in charge of the Home Office a generation ago.

Indeed, from Jamaican-born Raheem Sterling to Harry Kane, the son of an Irishman, 13 members of England’s football team are descended from recent immigrants. One Twitter user shared:

It’s so wild cause your policies and views wouldn’t have allowed someone like Raheem Sterling into the country. https://t.co/kdw9CkuoDr

Highlighting that eight of England’s starting 11 are the sons of immigrant families, Rosie Aspinall Priest tweeted:

8 of the English team come from immigrant families, many of whom wouldn’t be allowed in the UK under her new immigration laws. They’d be designated to “off shore detention centres”.

So Priti Patel can STFU. She’s a horrendous monster. https://t.co/vSE0evjyfJ

Just out of shot, a TV showing CCTV footage of a deportation flight. pic.twitter.com/b8rjCFgqwT

Johnson could learn a thing or two from Southgate

Former England footballer Gary Neville criticised England’s political leadership over the course of the coronavirus (Covid-19) pandemic. During ITV‘s post-match analysis on 7 July, he said: “The standards of leaders in this country in the last couple of years has been poor”. Turning to the England football team’s manager Gareth Southgate he added: “that’s everything a leader should be: respectful, humble, tell the truth, genuine, he’s fantastic”. In response, writer Mic Wright shared:

England’s win against Denmark comes after prime minister Boris Johnson announced plans to lift all coronavirus restrictions on 19 July. This will include an end to social distancing and mandatory face masks, and reopening nightclubs and theatres. Scientific advisers and medical experts are urging the government to reconsider this plan in the wake of rising coronavirus cases, calling it a “dangerous and unethical experiment”. Carole Cadwalladr tweeted:

The English team so deserves this stunning success. But look what else is on this front page.

Throughout the tournament, England players have been taking the knee before Euro 2020 matches to protest racial inequality. The team was met with boos from the stands at a number of matches. The prime minister refused to condemn the booing fans. And the home secretary actively defended disapproving fans, saying that they have every right to boo the team for protesting racism.

The team’s symbolic protest came after the global resurgence of the Black Lives Matter movement, which saw people take to the streets to protest structural racism. The UK government’s response was to commission a race report that denies the existence of institutional racism in Britain. More recently, on 5 July the government’s draconian Police, Crime, Sentencing and Courts Bill passed its third reading in parliament. The bill seeks to clamp down on the right to protest and to increase police powers.

Despite their disdain for Black lives, Johnson and Patel have been quick to claim the England team’s success in the Euros. Of course, this helps them to push their nationalist agenda. Spotting the hypocrisy of Johnson’s tweet – with a photo of him outside Number 10 standing on a giant St George’s flag – ahead of the quarter-final, David Conn tweeted:

Boris Johnson thought there were votes in booing England players taking the knee; now trying to wrap himself in their success. https://t.co/C07mNugN5F

Responding to the home secretary’s celebration of the team’s subsequent victory at the match, he added:

Priti Patel another who backed booing the England players for their anti-racism stance, now trying to associate herself with their success. https://t.co/kncnmrQ1zX

Let's remember how supportive these people were of this brilliant, unifying England team pic.twitter.com/F5Z3oltEkO

Highlighting how the state and its institutions treat Black footballers when they aren’t winning games, Dominic Kavakeb drew attention to the police killing of Dalian Atkinson:

Patel accused England’s footballers of “gesture politics”. But it doesn’t get more gestural than her and Johnson’s celebration of England’s immigrant-heavy team – all while they continue to pursue a racist, xenophobic, nationalist political agenda.