Is police harassment being used to counter an anti-goldmine campaign? - Canary 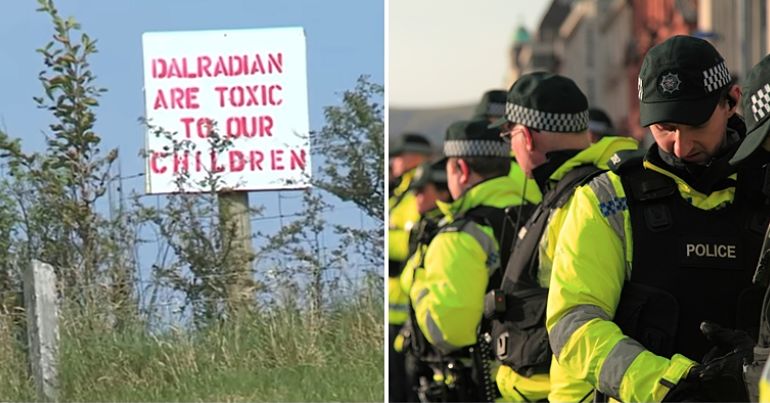 In August 2020, The Canary reported that anti-goldmine campaigners from the Sperrin Mountains of County Tyrone protested outside Omagh police station. They claimed the police weren’t taking seriously the grievances they’d raised against supporters of the mine.

In response to those claims, the police said it offered “a service to the whole of the community”. But according to anti-goldmine campaigners who spoke to The Canary, it appears as if matters may have worsened since August 2020. Because some campaigners are now alleging outright police harassment of their campaign.

One campaigner’s solicitor said he has already filed a complaint with the chief constable about overall policing in the area, while the legal team representing others said it’s drafting a complaint to the police ombudsman. The campaigners remain anonymous for this article.

One alleged incident of harassment occurred in July 2021. The location of this incident is roughly 50 miles from the proposed goldmine site. The campaigner said he’d been out driving one day when a police car signalled for him to pull in to a supermarket car park. He claims he was then surrounded by police, with some holding their guns out of their holsters. He also claims they boxed his car in for around forty minutes.

This campaigner says police told him they’d pulled him over on instructions from “silver command” in Omagh police station. He said the officers knew his name before he identified himself.

He also claims that in 2017, just as he was getting involved in this campaign, local police went to his neighbour’s and families’ homes pressurising them to dissuade him from getting involved. Additionally, he showed photographs to The Canary which appear to show a police car parked outside his house. He claims another parked car was an unmarked police car. Another photograph shows an officer standing outside his vehicle facing the campaigner’s house. A third shows a police vehicle facing his house with its headlights on full.

This campaigner also claims a serious grievance he raised against a Dalradian employee has effectively gone unheard. His solicitor said the chief constable’s office told him it didn’t find it appropriate to investigate that grievance. It’s instead forwarded the grievance to the police ombudsman’s office.

Two other campaigners claim police sometimes call late in the evening to the homes of different people involved in the campaign. This could be either in person or over the phone. And when they call, they attempt to warn people from taking part in the anti-goldmine campaign. One local man reportedly couldn’t sleep for two days due to the stress of a police visit.

One of these campaigners claims that police have reportedly told people they haven’t done anything wrong so far, but should they continue their efforts on this campaign they could face prosecution. The other campaigner claims that accusations he’s made against Dalradian employees aren’t being taken seriously.

On Tuesday 1 October 2019, police arrested eight anti-goldmine campaigners at a Fermanagh and Omagh District Council meeting in Omagh. The campaigners attended that meeting to protest the council’s delay in fully opposing the granting of mineral prospecting licences.

Police arrested protesters “on suspicion of failure to leave a public building”. That same evening, police released them and reported them to the Public Prosecution Service. Campaigners claim that in recent weeks the police have started calling their homes, sometimes late on Friday evenings, asking them to accept a caution for that protest.

Some of the campaigners were heavily critical of mainstream political parties and in particular Sinn Féin (SF). SF has a number of elected representatives in the community and its members sit on the local Policing and Community Safety Partnership. According to one local campaigner, SF has “done nothing” to hear their voice or address their concerns.

In February 2019 SF claimed its “opposition to this [goldmine] proposal is very clear” and it “will continue to support residents in their opposition to it”. On its website, the party states:

Sinn Féin recognises the environmental damage caused by precious metals mining and the extraction of Ireland’s non-renewable natural resources with little or no benefit to local communities.

The Canary contacted SF for comment about the campaigners’ allegations but received no response.

People Before Profit (PBP) has already made clear its opposition to gold mining and its support for the local community. It attended a recent demonstration outside the Irish parliament against the goldmine proposal. The Canary contacted other political parties in the area for comment. The SDLP’s policing spokesperson Dolores Kelly MLA said:

The experiences of policing described by people living in County Tyrone are deeply concerning. Everyone deserves to access a policing service that is proportionate, fair and based in compliance with human rights standards. I would encourage anyone with complaints about specific incidents to contact the Police Ombudsman’s office but I will raise these broader issues with senior officers at the earliest opportunity.

When The Canary contacted the PSNI about the campaigners’ allegations, superintendent Alywin Barton said:

Police are very much aware of the tensions between the proposed mining operation in the Greencastle area, the company involved and those with environmental concerns. As a result every complaint received irrespective of who makes it, is properly investigated in a fair and impartial way without favour or prejudice. Where appropriate a file is prepared and submitted to the PPS for independent direction.

I am confident in the proportionality and impartiality of police in this issue and would encourage anyone who has concerns about police actions to report them to the Police Ombudsman for a fully independent investigation.

A community standing for the environment

The concerns raised by these campaigners and their legal teams are troubling. And they’re even more troubling during a climate emergency. But despite the allegations, these campaigners told The Canary they’ll continue to defend their community and oppose this goldmine plan.