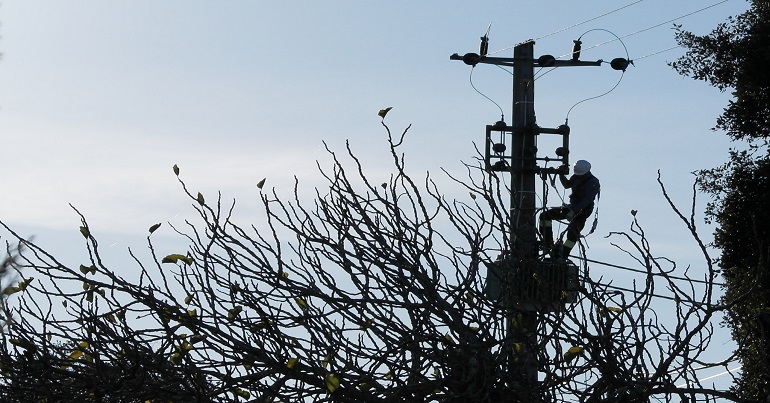 A man whose home has been affected by power cuts has said he has “no hope left at all” as he faces an eleventh night without central heating. Stewart, who lives in Alnwick, Northumberland, is one of thousands of people still living without power in the aftermath of torrential rain and gale-force winds which battered the north-east at the end of November.

Storm Arwen affected power supplies to more than one million households 10 days ago, and Storm Barra threatens to bring further disruption as it moves in from the west on Tuesday. Stewart, who wanted to be known only by his first name and lives with his partner, said Northern Power Grid has promised his power will be restored within 24 hours every day since it cut on November 26.

“It’s exhausting, it’s wearing us down”

It’s exhausting, it’s wearing us down, and it’s a constant worry. Every day seems to bring a new problem.

On day nine there was torrential rain and our village started to flood. That was mainly because of the storm debris.

What happened was that then flooded our village water works – it flooded our sewage system. Our neighbour couldn’t use his toilet without it flooding.

I had to clear standing water from the road, which got my clothes wet, and then return to a house without heating.

From my window I can see a snapped telegraph pole and cables lying on the ground.

The weather forecast is dreadful. We have not got any hope at all. It’s awful, it’s the futility of it.

Stewart said he has been showering using water heated on a wood-burning stove in his living room, and by travelling 12 miles to his sister’s home. He said his village has had little support, with no sign of re-enforcements from the Army, fire service or council, and their main form of sustenance has been from a van providing free fish and chips at sporadic times over the weekend.

Northern Power Grid has handed out survival packs, consisting of a small blanket, hot water bottle, mug, pair of socks, glove and hat – but “no logs, candles or batteries”, he added.

Still homes without electricity with another storm on the way

The majority of those affected live in the north east of England where there are still 1,600 homes without electricity, the ENA said. Scottish and Southern Electricity Networks (SSEN) said power had been restored to all 135,000 of its affected customers by Sunday evening.

Storm Barra will hit on Tuesday, following on from wet and windy weather on Sunday night and throughout Monday, the Met Office said.

While the west of Ireland will receive the worst of the storm, yellow wind weather warnings are in place across England, Wales and Northern Ireland. Yellow snow warnings are also in place in southern and western Scotland.

Met Office meteorologist Simon Partridge warned that gale force winds of 45-50mph on Tuesday and into Wednesday would not make it “easier” for Northern Power Grid engineers trying to reconnect the remaining homes. He said:

It’s certainly not going to aid things with those sorts of wind strengths, and a mixture of rain and snow in there as well,

It’s not going to make working conditions any easier for those out and about.

A spokesperson for the ENA said that operators were “working together” to prepare for the storm. He said:

Energy network operators are working together to prepare for the developing Storm Barra,

Energy Secretary Kwasi Kwarteng visited the North East on Sunday to survey the damage done by the storm.

During a visit to a Northern Powergrid call centre in Penshaw, near Sunderland, Kwarteng told the PA news agency:

I think we can make the system a lot more resilient.

I had an experience on August 9 2019 when a million people in the South East were commuting and they had a power outage.

Immediately after that we had a review and we looked at the system and we held the transport and train companies’ feet to the fire and we have got a more resilient system.

That’s exactly what I want to happen this time.

We will have a review, we will see if the distributor companies have enough infrastructure, we may even have enforcement action if necessary.

Long delays led to the regulator getting involved

Speaking at the call centre, Kwarteng said he did not accept that the power cuts would have been resolved quicker in the South. He said:

The physical infrastructure, layout and landscape is very different,

One of the particular reasons why we haven’t got people back on the power supply is the weather conditions and they are very challenging (with) people in sparsely populated, very rural areas and that represents a challenge.

On Saturday, Boris Johnson said he had held calls with those leading the response to Storm Arwen and the government was ready to further support the recovery work “in any way we can”. The long delays have prompted energy regulator Ofgem to warn it will take enforcement action against network companies who failed to restore power to customers quickly enough.

It has also agreed with firms to lift the £700 cap on compensation which could be offered to those stuck without power. The change will allow those affected to claim £70 for each 12-hour period they have no electricity, after an initial £70 for the first 48 hours of any cut.