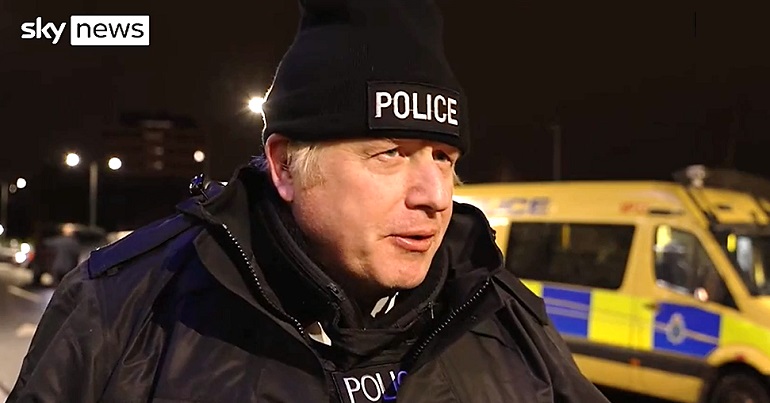 People on social media have rinsed Boris Johnson for an interview with Sky News. It was over the government’s new drugs policy. The reforms hardly got off to a flying start – as the dishevelled and frankly ludicrous PM made a fool of himself live on TV. But Johnson’s performance also undermined the seriousness of the subject in hand.

As The Canary previously reported, Johnson is shaking up the government’s drugs policy. He already got off to a bad start, with a monologue to the Sun which would have been more at home in 80s kids TV show Grange Hill‘s “Just Say No” campaign:

[drugs] not going to make you cooler. They’re bad news.

The detail of the government’s reforms are now available. The Canary noted that measures would include police confiscating cocaine user’s passports and driving licences

As the Guardian reported, these include:

But on Monday 6 December, you’d think the very serious issue of drug use in England was a bit of a joke for Johnson. Because the PM used the story as a shambolic photo-op.

He gave an interview to Sky News dressed as a cop:

Prime Minister Boris Johnson says the government is 'ramping up their campaign against the county lines network', adding 'we want everybody to grow up in safer streets'.

Johnson himself even shared one – clearly not in a self-deprecating way, though:

We’re getting tougher on crime to provide the safety, security and support that communities need to level up. pic.twitter.com/UEVx9g6FTP

Dressing up box out again. What utter madness is this? Can’t people see how ludicrous it is?

The cosplay prime minister returns. I thought it was against the law to dress like a cop?

Someone else pointed out about it being illegal to impersonate a fed – and as Steve Nicholls wryly came back with:

Is there one for impersonating a Prime Minister too?

But while Johnson’s shambolic dressing-up party antics may be amusing, his drug reforms aren’t.

The drugs crisis: not a laughing matter

There are an estimated 300,000 opiate or crack users in England, and around one million people using cocaine per year. Meanwhile, drug poisoning deaths are at a record high, having increased by nearly 80% since 2012.

Johnson’s reforms serve little more than to continue the failed criminal justice approach to drugs. And his contemplable photo-op undermines the seriousness of the situation.