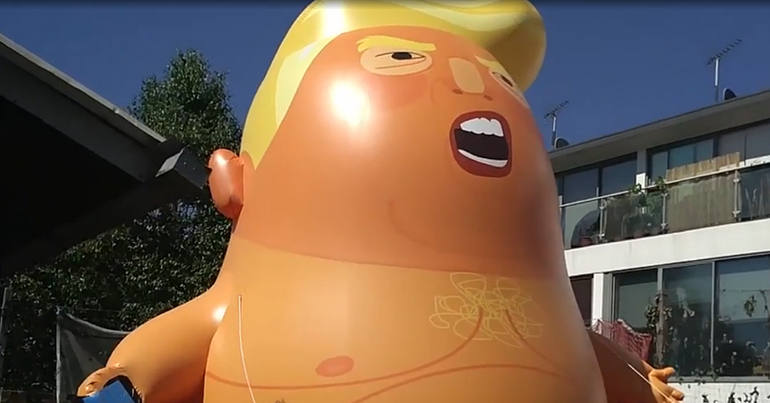 As President Trump heads for London this week, a giant ‘baby Trump’ balloon will take to the skies. And the the right wing media are hilariously puffing themselves up in outrage about it.

The “six meter high orange, inflatable baby with a malevolent face and tiny hands” is being paid for by a crowdfunding campaign. It will fly over the London protest on 13 July. Organisers say that the balloon will send a message that “fascists are not welcome in the UK.”

Outrage from the right

The Daily Mail has dissected the backgrounds of those involved with getting the balloon into the air. Leo Murray, it claims, is a “career activist” and “a wealthy descendant of a former Labour peer”. It says another organiser is a “hard-line Corbynista“. A third is apparently a vicar’s son.

Meanwhile, Daily Mail columnist Quentin Letts uses the balloon as an opportunity to launch an attack on London mayor Sadiq Khan, who gave permission for it to be flown. Letts asks:

Would a serious mayor, a proper, substantial, internationally-minded leader of our capital city, in touch with his real constituents rather than fringe protesters, not have put such considerations [maintaining a good US-UK relationship] above his own childish posturing?

The Sun also hones in on the background of “ringleader” Murray, with the heavily laboured headline “Toff Heir Protest”. And like the Daily Mail, the paper uses the event to attack Sadiq Khan, saying that his decision to allow the balloon to fly is:

… puerile student politics, virtue-signalling for his social media fans, rather than a grown-up decision from a man whose day job is as the face of the engine of the British economy.

Sadiq Khan should be ashamed of himself. He’s so busy attacking President Trump’s visit and, in the meantime, crime is spiralling in London. Maybe he should just do his job instead of attacking a world leader.

The baby Trump, however, is merely amused by all the outrage. It has its own Twitter account and recently tweeted:

Wow. First they said I couldn't fly, then I was just a load of hot air – now I'm a threat to the United Kweendom! Never underestimate me or the TREMENDOUSLY talented ppl I have babysitting me. Believe me, you have no idea what I'm capable of pic.twitter.com/YENHUNa7Go

Trump’s visit to London has been on and off for over a year. He was reportedly not willing to come to the UK if there were likely to be protests.

Now Trump is finally coming – but it’s not a state visit, and he’ll be almost entirely avoiding London. Instead, he’ll be having what Reuters describes as a “tour of English country homes”.

Guardian columnist Owen Jones describes the protest as “a perfect riposte to the snowflake right”. He goes on to say:

And as a bonus, as Trump – a man who ridicules and demonises anyone who dares to challenge him – is feted by the British establishment, he will know that somewhere up above him, in the sky, is a giant blimp of the president as a howling baby.

The blimp is a massive humiliation for Trump. Instead of his desired golden carriage, he’s getting himself as an inflatable giant baby. It’s probably not the welcome he was hoping for.

– Join a protest against Trump, in London or in one of dozens of other towns around the country.