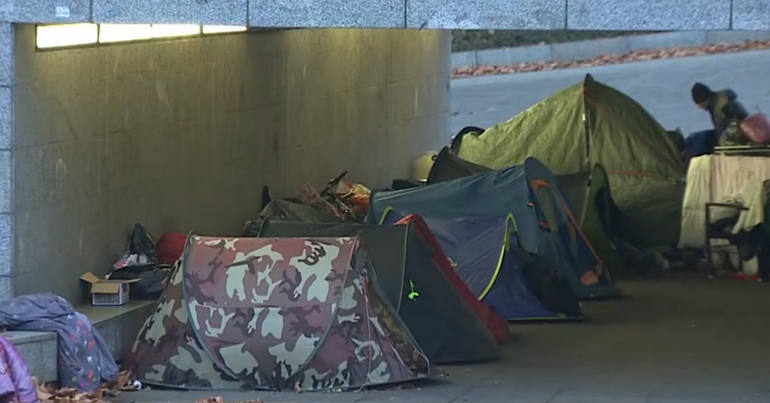 Landlords are evicting hundreds of families every week without giving a reason. And it’s completely legal. New figures from campaign group Generation Rent show that 11,247 households were made homeless in 2017 through so-called ‘no-fault’ eviction. That’s 216 households every week.

Most tenants are on assured shorthold tenancies of six or twelve months. Once this period is up, Section 21 of the Housing Act 1988 allows landlords to evict them with just two months’ notice. Landlords can evict tenants without giving any reason. According to Generation Rent, “evictions are the number 1 cause of homelessness” in England. 80% of evictions are no-fault.

Recently, Kent landlord Fergus Wilson used Section 21 to evict four women with young children. He claimed he was forced to take the “heartbreaking” action because of council rules requiring boilers to be fixed immediately in homes with young children.

And in February 2018, BBC Panorama‘s Evicted For No Reason documentary featured several cases of people who had been evicted under Section 21. One of them, Laura, was evicted with her five children. The local council rehoused the family in bed and breakfast accommodation. Laura said there were “blood, urine stains everywhere”:

When working mum Laura was evicted, it meant homelessness for her husband, mum and five kids. Watch Evicted For No Reason: Panorama, 8.30pm tonight on @BBCOne pic.twitter.com/LRxQowU6Fa

In 2015, the law changed to make ‘revenge evictions‘ (also known as ‘retaliatory evictions’) illegal. These are where landlords evict tenants who complain about poor conditions. However, the protection only covers tenants who have complained both to their landlord and to the council. It does not apply if the council has not then told the landlord to make improvements. Generation Rent says that the protection is a “postcode lottery”.

A spokesperson for the Ministry of Housing told the Observer:

We have introduced new measures to stop so-called retaliatory evictions, but we know we need to do more and we are consulting on three-year minimum tenancies.

Councils have new responsibilities to prevent homelessness, and the government has just launched a strategy to end rough sleeping, but they have no chance of success if landlords can continue to kick out tenants with impunity.

In 2017, the law changed in Scotland to end fixed-term rentals and outlaw ‘no-fault’ evictions. However, landlords can still evict if they, for example, want to live in or sell the property. Generation Rent says changes needs to go further, including “a payout to tenants if they are forced to move”. Labour, the Green Party, and the London Assembly all support the campaign to scrap section 21.

The Resolution Foundation says that a third of millennials will never own their own home. So, at least scrapping Section 21 would give them a little more protection from rogue landlords.

– If you belong to a political party or union, ask your local branch to adopt a motion to abolish section 21.