The Department for Work and Pensions (DWP) is once again in chaos over Universal Credit. But look behind the headlines and its latest move is little more than a stunt, effectively trying to pull the wool over people’s eyes.

As the Observer first reported, work and pensions secretary Amber Rudd is delaying a parliamentary vote on the new benefit. It was to get MPs’ approval for “managed migration“. This will be where the DWP moves people on “legacy” benefits (old ones like Jobseeker’s Allowance) over to Universal Credit. The vote is happening because the government is amending existing laws.

As the Observer reported, instead of Rudd asking MPs to vote on moving 3 million claimants onto Universal Credit:

Rudd will now seek approval from MPs only for a pilot scheme that transfers just 10,000 people from the old to the new system… Only after the pilot has been assessed will MPs be asked to approve the full roll-out.

Rudd also tweeted about the change:

UC is an vital reform so I want to roll it out carefully.

I’m glad charities & colleagues are backing my plans to move & monitor 10,000 people from the old system.

It means #UC can proceed on time & be fit for purpose: helping people work & getting support to people quickly. https://t.co/lw7h3ywe6g

Much of the media spun the story as Rudd backtracking over the benefit. For example, the Mirror‘s Mikey Smith wrote:

Instead she plans to seek approval to move just 10,000 claimants onto UC to monitor the way the system works.

NottinghamshireLive ran with the headline “Roll-out of Universal Credit could be delayed for three million claimants”. And ITV News reported that:

The change comes after Ms Rudd took over from Esther McVey at the Department for Work and Pensions in November.

Meanwhile, Channel 4 News tweeted that Rudd was “dramatically scaling back” the next stage of Universal Credit:

Universal Credit was meant to simplify and streamline the existing benefits system but today the government announced it was dramatically scaling back the next stage of the scheme. Can it be saved or should it be scrapped?https://t.co/321NmhFxVk

Amber Rudd decided to dramatically scale back the next stage of the roll out: from 3 million benefit claimants to just ten thousand.

But most of this reporting is wrong, apart from the fact Rudd has delayed the MPs’ vote on managed migration.

Firstly, there’s no indication that the roll out for 3 million claimants has been “scrapped” (the Mirror) or “delayed” (NottinghamshireLive). Nor has Rudd chosen to “dramatically scale back… the roll out: from 3 million… claimants to just ten thousand” (Channel 4 News). The government is still saying it will implement Universal Credit fully by December 2023. Also, the DWP was planning in 2016 for managed migration to start in July 2019.

Moreover, the managed migration phase was always going to be gradual. As a parliamentary briefing from 2017 shows, the DWP would move existing claimants onto Universal Credit over time: 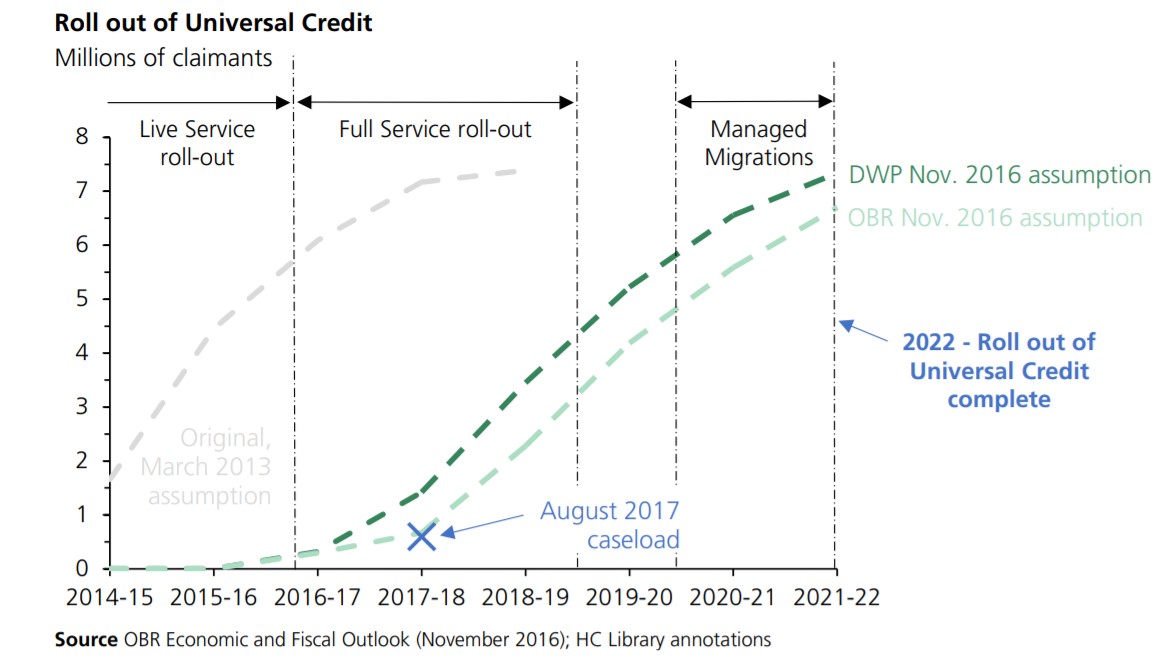 Then there’s the issue of this decision being credited to Rudd. The Observer first reported that:

The proposed pilot scheme, which is expected to be announced in a speech this week, follows a new tone from Rudd since she took her post in November.

But it’s actually not her idea. As BBC News reported, the decision to do a managed migration trial of 10,000 claimants was taken under Esther McVey in October 2018.

Most problematic, however, is the welcome which Rudd’s announcement has received from some people.

The government seems finally to have woken up to the human catastrophe that was waiting to happen under its ill-formed plans for moving people on to universal credit.

It hasn’t woken up to anything – because nothing except the MPs’ vote on managed migration has changed. Moreover, the DWP could still wriggle out of that.

Currently, the managed migration amendments to the law are an “affirmative statutory instrument“. This is where a minister changes an existing law, then the Houses of Commons and Lords vote on it. But there is nothing stopping Rudd from changing the amendments to a “negative statutory instrument“. This would mean she could push the changes through without MPs voting on them.

Overall, Rudd has merely applied some smoke and mirrors to Universal Credit. But she hasn’t actually changed anything. And to say otherwise is wrong. So opposition politicians and campaigners need to maintain the pressure on the DWP over this flawed benefit. Because the reality is it’s business as usual from the department.