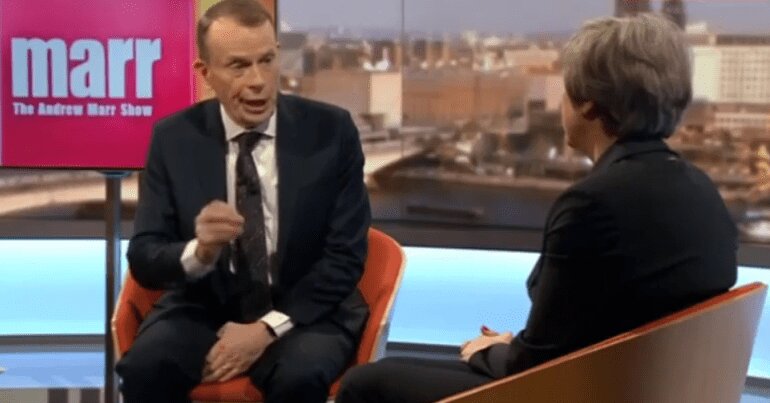 Andrew Marr effectively helped Theresa May sell her longstanding Brexit border paradox to millions on 6 January. May claimed yet again that there will not be any border between the UK and the EU, and that she will control freedom of movement. But Marr did not challenge her on the impossibility of ‘controlling our borders’ while at the same time not having a border.

the Irish government has said they will under no circumstances put up a border; we know the DUP and Northern Irish politicians won’t put up a border. There is not going to be an Irish border, and therefore, why does there need to be a backstop?

The prime minister responded with platitudes:

we are very clear that we will do everything… in our power not to have a hard border between Northern Ireland and Ireland.

Yet shortly after, May claimed her deal would control our borders:

Do we want to bring back control of our borders, laws, and money? … there is one way forward, which is to ensure that we leave with a good deal, and there’s a good deal on the table.

Marr didn’t ask how May plans to balance having no border and “bring back control of our borders”. And that’s not all. The presenter also failed to point out that the deal does not “bring back control” of our laws or money either.

For instance, as part of the backstop, the UK remains locked into EU rules preventing state intervention in the economy with “non-regression”. That means that when the EU legislates further restrictions on public spending, the UK will automatically follow without any say on the matter. And the government’s legal advice that May tried to hide shows there is no way for the UK to leave the backstop – and therefore the spending curbs – without approval from the EU.

It’s unclear what May means by ‘bring back control of our money’. Perhaps she means the around £250m per week we pay into the EU. Because, in a broader monetary sense, the UK is not in the Euro and therefore already has sovereign control over its monetary supply.

Eurozone countries, however, do not have such self-governance. The European Central Bank recently rejected Italy’s budget because it did not include deep enough austerity measures.

May’s deal really is the ‘worst of all worlds’. With corporate journalists like Marr virtually giving the prime minister a free pass, we must ensure that May’s plan does not happen.