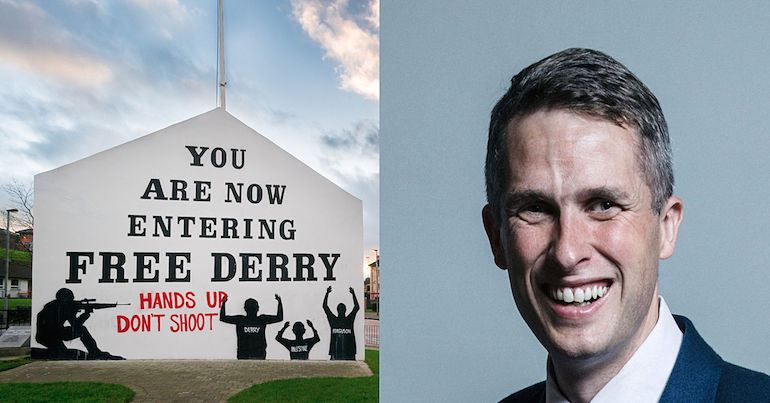 Following the announcement that ex-British paratroopers could face prosecution for the Bloody Sunday massacre in Derry, defence secretary Gavin Williamson rushed to quash that chance.

Instead, Williamson plans to introduce legislation that places a 10-year limit on prosecuting army veterans for alleged past offences. This would mean the surviving soldiers from that day in Derry wouldn’t face justice. And it could place further pressure on Irish-British relations when dealing with the past conflict.

The British Parachute Regiment murdered 14 civilians in Derry on Sunday 30 January 1972. These innocent civilians were part of a civil rights march taking place that day. But despite their innocence, Williamson said the possible arrest of paratroopers for their murder:

completely turns the stomach of the British people

The Northern Ireland Civil Rights Association (NICRA) organised that march against internment without trial. Just as in Guantanamo Bay, internment involved arresting and detaining people without a court hearing and was based mainly on the word of police or security services. Brian Faulkner, an Ulster Unionist and prime minister for the north of Ireland, introduced internment without trial on 9 August 1971.

He introduced internment to target members of “illegal paramilitary groups”. But when it ended on 5 December 1975, of the 1,981 people who’d been arrested, 1,874 were from the republican community. Only 107 were loyalists. And they only arrested a small number of IRA members in the early raids. There were also allegations of torture.

Within days of the massacre, prime minister Ted Heath announced an inquiry. Lord Chief Justice Lord Widgery began that investigation. But it was a farce. It exonerated the parachute regiment and even blamed the march for the murders. There were several inconsistencies in Lord Widgery’s report.

And it wasn’t until 1998 that the more credible Saville inquiry began. Eventually, in 2010, it found the 14 massacred civilians to be innocent and their killing “unjustified”. It also found that soldiers lied to the inquiry. So legal action could then follow. But there have been no prosecutions so far.

Reports on the prosecutions

17 of the paratroopers are still alive. But it appears as if just four could face prosecution. When reporting on the prosecutions, some mainstream outlets focused on the age and health of the former soldiers rather than the deaths of 14 civilians. Boris Johnson even described the soldiers’ actions as a:

misjudgement they may have made in the pressure of the moment

It’s debatable whether Williamson’s ‘stomach turning’ comments reflect the mood of British people. Because British people want justice too and need to know the army can’t operate with impunity.

And Ireland, north or south, can’t have a mature relationship with its closest neighbour until all past conflict matters are openly resolved.

Find out more about the Bloody Sunday justice campaign