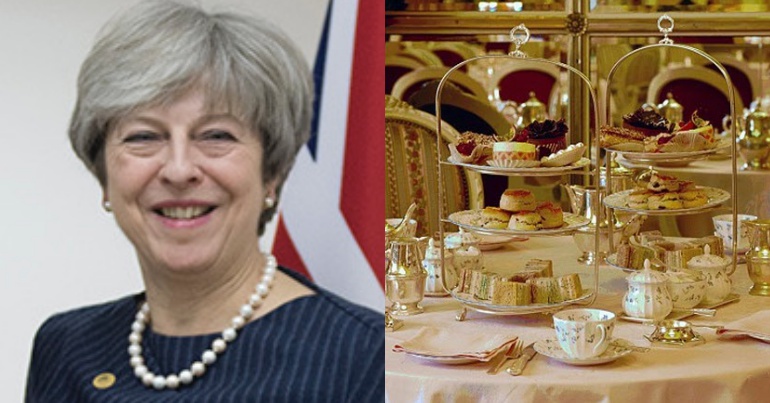 At Prime Minister’s Questions (PMQs) on 26 February, Theresa May told SNP’s Ian Blackford that: “He should vote for a deal – simples”, using a well-known advertising catchphrase. But it turns out she did this so her aide could win a bet. The prize was tea at the Ritz. It’s yet another Tory kick in the face.

On 2 March, the Mail on Sunday reported that:

Seema Kennedy, Mrs May’s Parliamentary Private Secretary, had a wager with Tory MP Simon Hoare that she could get her boss to say the word [simples]. Tea at The Ritz costs £58 – or £77 with a glass of bubbly.

Not surprisingly, this news has caused shock and outrage. With less than a month to go, and no Brexit deal on the table, May’s original line left many MPs “stunned”:

Really can’t believe the PM has just said her Brexit plan is ‘Simples!’ Well that’s one word for it!

But now, we know she did this for a bet. So it really does show just how totally out of touch May and her government truly are.

For a start, it poses a very serious question about whether this bet breaches parliamentary procedure:

Surely @IanBlackfordMP should be raising this as a point of order? This surely brings the house & indeed the office of Prime Minister into disrepute when she can be persuaded to say something which wins a bet or has any other financial recompense as a result.

And as the SNP’s Nicola Sturgeon pointed out, the timing of their “jolly japes” is also deeply concerning:

Jolly japes…while they drive the country to catastrophe. What a shambolic shower. https://t.co/eBJqbx7Xtm

But just as importantly, the price of a champagne tea at the Ritz is more than 1.36 million people living on Jobseeker’s Allowance (JSA) have to survive on for an entire week.

£77 win for tea at the Ritz. That's the amount my friend gets to live on. Actually she gets £73 a week. I'm all for having fun at work but this isn't exactly the height of tact is it? Mind you its probably the first time the silly woman actually did anything she was asked to do. https://t.co/mYxT4ayqon

Overall, this bet shows absolutely no awareness of the millions of people struggling under austerity, the soaring foodbank use, or the UK’s rising homelessness crisis:

A Knife Crime epidemic, a homelessness crisis a collapsed NHS, abandoned towns, child poverty, austerity, Brexit and Theresa May Govt betting tea at the fucking Ritz for PM to say ‘Simples’ in Parliament.. Are you Real?!? https://t.co/BcPe5okyHm

In all seriousness, while the Tories play games and indulge in champagne and canapés at The Ritz, our homeless are left dying in the freezing cold and Brexit is still a mess!

How many families in poverty could have been fed for the cost of tea at The Ritz? How many nights in a homeless shelter?

Called it “theatre” before but PMQs has now descended into opportunity for Tory MPs to bet with each other for not just cuppa but one with £77 price tag – while universal credit bites https://t.co/z2rYONxYVa

The timing of this bet truly does lift the lid on Conservative policy. Because it came in the same week that data from the Office for National Statistics (ONS) revealed that inequality in the UK is rising. As the Big Issue reported, “the gap between the richest and the poorest widened”, and “the benefits freeze is to blame”. The report found that:

Winning tea at the Ritz also came in a week when a separate ONS report found that more homeless people died in deprived areas. In fact, the rate is “nine times higher in poor areas than rich areas”.

And yet Kennedy, Hoare and May got involved in a bet for tea at the Ritz. As well as showing that they don’t have a clue, this reveals just how twisted and cruel this government truly is.