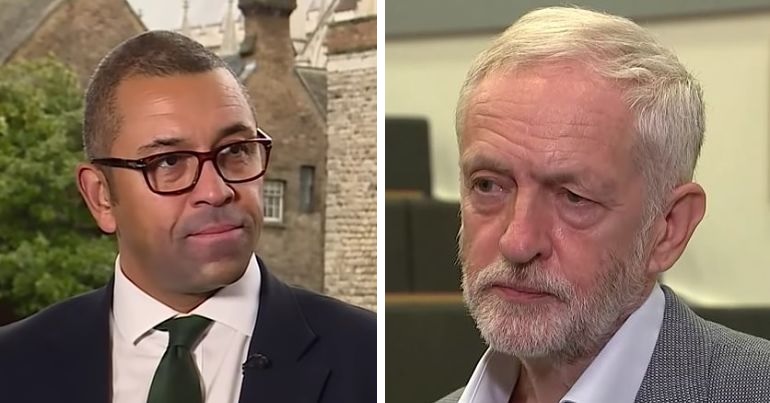 28 comments
Support us and go ad-free

James Cleverly is trying to row back after effectively applauding a physical assault on Jeremy Corbyn.

Someone reportedly hit the Labour leader, while holding an egg, as he visited a mosque on 3 March. In response, Rachel Riley – one of the ‘get Corbyn’ brigade’s major players – seemed to defend the assault by associating him with Adolf Hitler’s regime. Essentially, she suggested that Corbyn deserved an egging because he’s ‘a Nazi’.

The Conservative Party deputy chair responded to Riley’s tweet with a massive thumbs up. Or rather, he posted a gif involving the word “BOOM!”. Cleverly’s reaction has, however, caused quite the stir, with it seemingly promoting violence against public officials. So amid calls for his resignation or suspension, he’s come up with an excuse for his behaviour.

The attack on Corbyn happened while he visited Finsbury Park Mosque. Some reports also claim that the perpetrator attempted to punch the Labour leader. The Metropolitan Police have arrested a man on suspicion of assault. But Riley appeared to think Corbyn had it coming:

Cleverly did too, it seems. As he replied to Riley’s tweet with a gif that suggested it was spot on:

His apparent endorsement of violence against a member of parliament didn’t go down well though:

Are you actually celebrating the physical assault on a Member of Parliament who was visiting the Mosque that was the place of a terror attack? Shocking and disgraceful. I hope you're disciplined by your party.

Fancy a Conservative MP condoning and encouraging violence against the leader of the opposition. I didn't think you could sink any lower, but alas, I was wrong.

How dare you. This is so irresponsible. People like you are responsible for encouraging the rise in violence on our streets.

What I meant to say…

So Cleverly quickly tried to ‘clarify’ what he meant in his original tweet:

Seems a lot of people can’t tell the difference between advocating eggs being thrown at people (which I’m not) and me supporting RR in highlighting hypocrisy (which I am).

Don’t throw eggs at people, even if you disagree with them.
(In case you’re not sure of my views on this)

The supposed hypocrisy Cleverly was trying to ‘highlight’ came from journalist Owen Jones. Because in the linked tweet Riley posted, Jones effectively argued that ex-BNP leader Nick Griffin was egged because he’s a Nazi. As Jones explained, however, there’s a vital difference between the two situations:

A Brexiteer protester threw an egg at Jeremy Corbyn outside the same mosque which was attacked in 2017 by a far right terrorist, whose main motive was murdering Corbyn himself.

The tweet you're quoting refers to Nick Griffin, *an actual Nazi*. You're in the absolute gutter. https://t.co/YYJMdDFK7i

Nonetheless, Cleverly doubled down on his excuse:

I’m not cheering the attack, I’m highlighting your hypocrisy.

You justified a similar attack on Nick Griffin because you don’t like him and find his politics distasteful.

I don’t justify physical attacks on people, ever.

Clearly, Cleverly doesn’t want to admit that he’s messed up. But he has, on many levels. Firstly, Corbyn is not a Nazi, by any stretch of the imagination. So Riley’s attempt to insinuate that is slanderous. And Cleverly’s wholehearted endorsement of her tweet makes him complicit in that smear.

Furthermore, the police are investigating an “assault” on Corbyn. So Cleverly’s celebratory reaction to Riley’s aspersion does come across as condoning violence. Finally, the words and actions of a number of parliamentarians – especially on matters of abuse and hate – are massively under scrutiny right now. In light of that, how on earth did he think he’d get away with this?

Well, the proof is in the pudding. Because he is getting away with it. There’s barely a murmur about this scandal in the mainstream press. It seems that politicians can do whatever the hell they like, as long as they’re not Corbyn or supporters of him. No wonder Cleverly doesn’t feel compelled to apologise or come up with a better excuse. Because the establishment isn’t going to call him out on it anyway.