As the media falls silent on his attack, Rachel Riley is accused of insinuating Corbyn is a 'Nazi' - The Canary 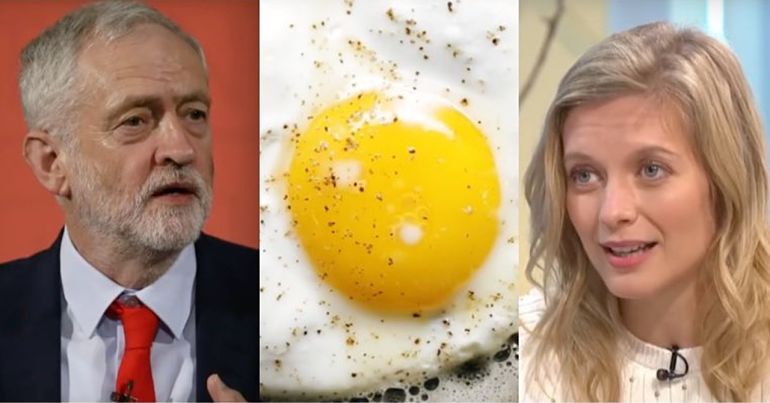 On 3 March Jeremy Corbyn was assaulted outside Finsbury Park Mosque. But not everyone is taking it seriously. And after responding to the attack, Countdown’s Rachel Riley has been accused of insinuating Corbyn is a Nazi.

The media’s silence on the attack has also been deafening. This suggests bias against the leader of the opposition and hypocrisy when it comes to political violence and abuse.

More than just an egg thrown

Where the assault has been reported, it has been minimised to just an egg-throwing incident:

But as journalist Jessica Elgot reported, the incident was more serious:

And as Skwawkbox has since reported, a Labour Party source has confirmed:

It was an attempt to punch him in the face not just egg him, but thank God little contact was made. Jeremy was shaken but not injured.

The incident took place at the Finsbury Park Mosque – the same mosque attacked by right-wing terrorist Darren Osborne, who admitted he had hoped to kill Corbyn.

And yet despite this serious context in which the attack took place, the media has stayed relatively silent. On both the attack and the subsequent slur.

This raises a simple question: why isn’t the media taking the issue seriously? After all, when then-Conservative MP Anna Soubry was called a “Nazi” and intimidated outside parliament, there was wall to wall coverage and commentary for days.

One person accused of mocking the incident is Rachel Riley. Riley is an outspoken critic of Labour’s alleged antisemitism and a presenter on Channel 4‘s Countdown.

But Riley has provoked fury on social media for tweeting the following:

Riley was presumably critiquing perceived hypocrisy over political violence, such as egg throwing. The red rose and egg emojis were a clear reference to the Labour leader reportedly being struck by an egg.

But people were unimpressed. Especially as Jones’s original tweet concerned an actual fascist and former leader of the BNP, Nick Griffin.

Riley quoting Owen Jones from January on a separate issue to imply that Corbyn, who has been assaulted, hit on the head, is a Nazi. Corbyn's attacker has been charged by police with 'assault by beating'. https://t.co/OGv3TbNFEx https://t.co/ddVxGwH1iE

And Owen Jones of the Guardian claimed that Riley was, “de facto” calling Corbyn a Nazi:

If @RachelRileyRR thinks it's acceptable to compare refusing to condemn an anti-fascist egging a Nazi with a rightwing protester egging Corbyn – who she is de facto calling a Nazi – outside a mosque targeted by a far right terrorist who wanted him dead, she has no moral compass.

Why the media silence?

Riley aside, the wider mainstream media ignoring the details of the attack has been revealing. Particularly considering the moral outrage expressed at the abuse suffered by other politicians recently. Yet again, this is a clear example of the media’s double standards when it comes to Labour.

Imagine if Theresa May got punched by a left wing activist…… do you reckon we’d have had half the commentariat tweeting egg puns all afternoon https://t.co/fOoTHF8Ciw

And as writer Afua Hirsch commented:

Is it just me or has the attack on @jeremycorbyn been completely trivialised by the media? He was not “egged”, he was punched by a man holding an egg. Reports have made it sound harmless. Can we please take a stand against violence and abuse, is that too much to ask?

Corbyn was punched, with an egg in the attackers hand, yet the deputy chairman of the Conservative Party thought it appropriate to celebrate this. Whilst many of us see Rachel Riley as an attention seeker, the lack of condemnation from across the political spectrum is damning.

The media has a duty to report the attack and condemn it. Especially considering the documented trend of UK media relentlessly promoting negative stories against Corbyn. Hostility towards him is largely its creation.

People can make all the egg jokes they like, it isn't funny. In this hostile climate, to which the media have more than contributed, they have a morale obligation to step up & diffuse.Instead, they stir the pot.

I just hope we don't have an "I told you so" moment, again.

Others are now genuinely concerned about Corbyn’s safety:

Thank fu*k it was an egg and not something far worse.

The media need to end their lies, smears & dangerous rhetoric and quit with the hyperbole.

If he gets hurt, we know where blame will lie: with the media, the establishment and all those attacking him for their own gain.

Jeremy Corbyn was today hit on the head by a man holding an egg. The egg made the headlines but the seriousness of the situation has thus far been overlooked. Jeremy’s personal safety matters and there are MPs and media people who need to start acting a lot more responsibly. https://t.co/KVdbbWc63P

And this is no laughing matter. At least one Twitter user has suggested Corbyn should be assassinated:

Here's one who wanted the egg to be a bullet pic.twitter.com/WSVFoWL8Fd

Jones was damning in his assessment that the media whips up hostility against the left generally:

I've said it before, and I'll say it again: the hatred and bile whipped up against the British left by the mainstream media, and self-described "centrists" and "moderates", is legitimising violence which is going to lead to serious injury and death. pic.twitter.com/ZtuJDrNKFS

Dangerous and needs to be challenged

Last week the media showed its hypocrisy regarding racism. Its obsessive treatment of Labour antisemitism contrasts with its near silence on Conservative Party Islamophobia. This week it’s selective outrage regarding abuse against politicians.

We live in a media culture saturated by smears and negative narratives about Corbyn. And so it’s unsurprising that a media that thinks him such a villain equally thinks him unworthy of compassion and concern. It’s because of this toxic media culture that people like Riley can make incendiary remarks about Corbyn with impunity.

While the Labour leader operates in such a hostile environment, Labour activists and supporters cannot stress the need to ensure his safety enough.