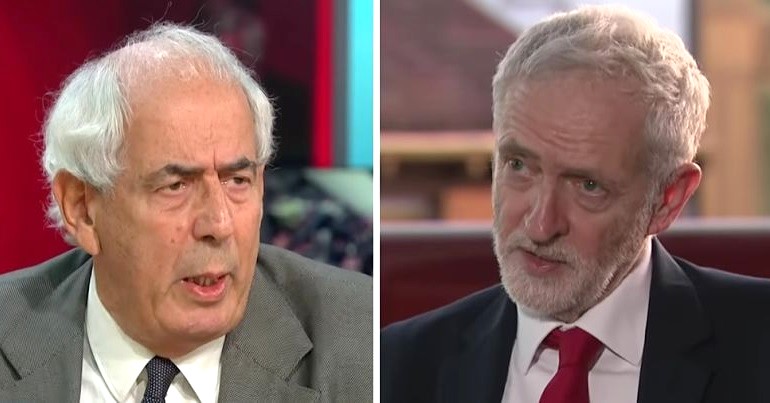 An anti-Corbyn author appears to have gone into hiding after a journalist exposed his book as an utter sham.

Oborne also says that, prior to publishing, he made numerous attempts to contact Bower “in order to give him the chance to defend himself”. But his efforts via email, text and phone were to no avail.

Here are a few examples of Oborne’s research into the book’s claims about Jeremy Corbyn. They may help explain why Bower isn’t eagerly stepping up to face the music.

In his book, Bower asserts that Corbyn adopted a speech written by freelance speechwriter Richard Heller for the 2015 party conference. Bower said Heller wrote the speech in the 1980s and that it:

had been repeatedly offered to every Labour leader since Michael Foot, and always rejected as too extreme

Oborne contacted Heller about this claim. He confirmed that he did offer the speech to previous Labour leaders. But, contrary to Bower’s assertion about its rejection, Heller told Oborne:

None of the previous leaders replied to me at all.

So, no Labour leader appears to have branded the speech “extreme”. It’s Bower that does so – and conveniently gives his readers the idea that Corbyn leans towards the “extreme” in the process.

“The enemy of the [Jewish] working class”

Trying to suggest that Corbyn is antisemitic, Bower also writes:

For Corbyn, Jews were automatically assumed to be rich capitalist financiers and bankers backed by Wall Street, and were all undoubted swindlers. They were not victims of racism, but the enemy of the working class.

As Oborne argues, Bower ignores the fact that Corbyn has “a long record of opposing anti-semitism” in his book. But he even disproves his own propaganda on this supposed prejudice. Bower asserts that Corbyn:

conjured a tale of a brave personal fight against exploitative Jewish employers of sweatshop labour. Parochialism and fantasy fed the original source of his anti-Semitism – namely, as he saw it, the malign collective power of Jews. Corbyn was immersed in an unfamiliar world. The union was dealing with struggling, overworked, self-employed Jews

So, he highlights the Labour leader’s time as a trade union official ‘railing’ against largely Jewish employers in the garment industry as an example of antisemitism. But, as Oborne notes, in the next sentence Bower admits that Corbyn was fighting for Jewish workers.

Meanwhile, Bower’s book reveals a lot about his own prejudices and his capacity for hypocrisy. As Oborne explains:

Bower’s concern with anti-semitism is clear. However, he talks of other minority groups with a language which he would be unlikely to tolerate if used about Jews.

One such passage, about Corbyn’s constituents in the 1990s, reads:

By 1998, new arrivals from Somalia, Pakistan and Bangladesh had packed into Islington North. Queues of migrants and asylum seekers at the Red Rose sought Corbyn’s help to obtain homes, welfare benefits, character references for bail, help to reduce their sentences after criminal convictions, and intercession to avoid deportation.

Bower is suggesting that these “new arrivals” to Islington are scroungers and criminals. But, as immigration lawyer Colin Yeo told Oborne:

The casual conflation of immigration with crime is extremely unfortunate. I seriously doubt there was much call for his assistance with bail, benefits, character references or criminal appeals, more like help with family members and refugee claims.

Clearly, Bower’s offensive description of these immigrants speaks much more about him than it does about them.

Through these examples, and many more, Oborne proves that Bower’s book is nothing more than an “ugly hatchet job”. But it’s one which has received rave reviews from the mainstream press. For Oborne, this begs a question:

Are British journalists allowing hostility to Corbyn to get in the way of telling the truth?

The incessant smears against Corbyn – including in Oborne’s Daily Mail – since he put himself up for Labour leader in 2015 provide the answer to that. This “ugly hatchet job” of a book is just the nail in the British media’s reputational coffin. Yes, if UK journalists still feel under any obligation to tell the truth (it’s clearly not a high priority), that completely goes out of the window with Corbyn.