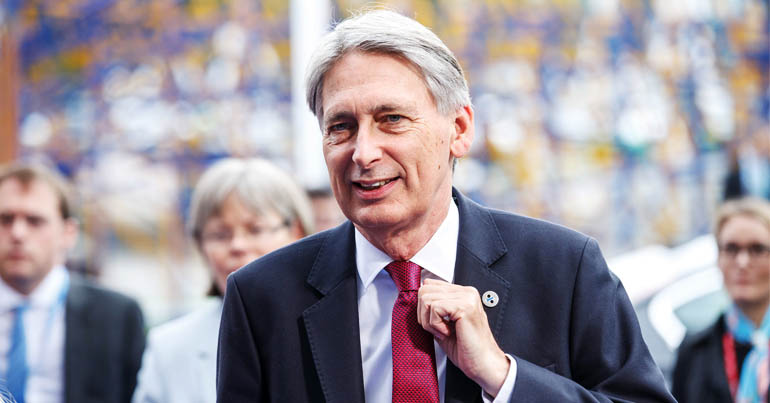 Chancellor Philip Hammond wrote to Theresa May about tackling the UK’s carbon emissions. But he didn’t throw his support behind large-scale efforts to fight one of the leading causes of climate breakdown. Instead, he warned that the cost would cut into funding for schools and hospitals.

The cost of climate breakdown

The Financial Times reported on 6 June that it had seen the letter. In it, Hammond told the prime minister that reaching net zero carbon emissions by 2050 would mean “less money available for… public spending”. The Committee on Climate Change (CCC), an independent advisory body to the government, promoted the target. It said in a recent report that effective action on climate breakdown will require about £50bn each year. However, Hammond’s letter used a £70bn figure calculated by the Department for Business, Energy and Industrial Strategy. As a result, Hammond said:

On the basis of these estimates, the total cost of transitioning to a zero-carbon economy is likely to be well in excess of a trillion pounds.

Funding this would drain money from schools, hospitals and the police, Hammond “warned“. The chancellor also claimed that investing in action on climate breakdown could leave some of the UK’s industries “economically uncompetitive”. In his letter, Hammond agreed with a net zero target, but stressed the government must “fully [consider] the implications… before setting it in law”.

As Business Green editor James Murray pointed out, despite supporting a net zero target, Hammond’s letter has widely been seen in a negative light. And it’s because of the chancellor’s middle-of-the-road tone. Murray described it as Hammond saying “steady there, careful now… can we think about this” on an issue that is imminently devastating. Furthermore, the editor also explained that the letter showed a “staggering lack of nuance or balanced analysis”.

Climate-focused news outlet Carbon Brief highlighted the lack of positivity in Hammond’s letter. It said that the chancellor left out the “large benefits” the CCC said would result from striving towards the 2050 target. It’s also clear from Hammond’s letter that he spends most of the three pages outlining why it’s nearly impossible, despite claiming to support the CCC’s goals. For example, in addition to draining public spending, Hammond also spoke of households being forced to buy “significantly more expensive” alternatives to gas boilers and hobs. He also mentioned the need for “significant changes” in industrial and agricultural practices, food consumption, and transport.

However, as a recent YouGov poll suggested, the public recognises the threat that climate breakdown presents. While Hammond claimed funding would need to be withdrawn from public services, 37% of people surveyed said they’d pay higher taxes towards decreasing carbon emissions. Meanwhile, 58% supported stronger taxes on the UK’s wealthiest 10% to fund these measures further. And, as some have noted, companies avoid billions of pounds in tax every year.

In October 2018, the UN’s Intergovernmental Panel on Climate Change (IPCC) said that humanity has until 2030 to limit the worst effects of climate breakdown. Failing to act would “worsen the risks of drought, floods, extreme heat and poverty for hundreds of millions of people”. Debra Roberts, co-chair of the group that produced the report, said the date is “a line in the sand… and we must act now”. With the IPCC and CCC’s warnings in mind, Hammond’s continued dithering is remarkable.

Environmentalists have previously criticised Hammond for his neglect of climate issues. Green MP Caroline Lucas, for example, pointed out the mess of contradictions in the chancellor’s Spring Statement. Announcing the statement in March, Hammond said that the “creativity of the marketplace” must be brought to bear on solutions for climate breakdown. But Lucas said that Hammond

announced energy efficiency standards for new homes, which his party scrapped in 2015. He wants travel providers to offer carbon offsets, while he builds new runways. And he paid lip service to biodiversity, without mentioning his devastating cuts to Natural England.

And once again, Hammond’s latest letter shows how limited capitalist ‘creativity’ really is. Profits remain an overriding concern at the highest levels, even as we stare into the face of climate disaster.