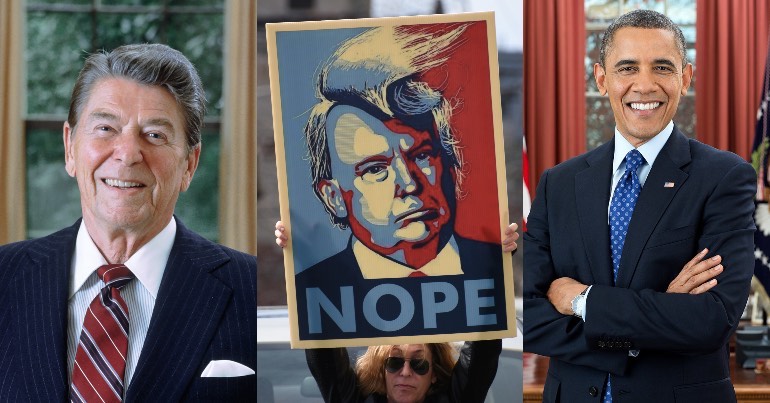 A comedian on Irish television has shared one key truth about US presidents that we shouldn’t forget amid Donald Trump’s visits in recent days. Colm O’Regan insisted that, even though Trump is particularly nasty, Ireland has welcomed presidents with records just as bad in the past. And Democratic presidents, he said, are often little better than Republican ones.

A “long line” of murderous US presidents

Ahead of Trump’s visit to Ireland, O’Regan asked:

How should we be with Donald Trump when he comes?

Officially, his welcome should be “frosty”, O’Regan said. But this, he said would go against Ireland’s history of welcoming other US presidents with atrocious human rights records. He pointed out:

we’ve welcomed plenty of American presidents in the past without much protest despite what they’ve done.

He then elaborated, saying:

And he insisted that, while Trump is also doing terrible things:

let’s not pretend he’s not following a long line of presidents.

He also maintained that, while most Irish people love Democratic presidents, Democrats and Republicans are often “just two cheeks of the same arse”.

Context aside, Trump’s 2019 Ireland visit did not go well

Meanwhile, Trump has again demonstrated his ignorance when it comes to basic facts. During his stay in Ireland, he suggested that Brexit will be good for Ireland. When asked if he thought Brexit will be bad, he replied:

He finished by insisting:

I think ultimately it could even be very, very good for Ireland. But the border will work out.

Trump had earlier said that there are “some very good people that are very much involved with Brexit” in the UK.

His comments were widely mocked on social media. One user took particular issue with Trump’s earlier claim that he knows most people of Irish descent who live in the US:

He said he knows all of the Irish, in America. They are friends! Hard not to laugh at this stuff. You can’t make it up.

Varadkar looks baffled when Trump says he hopes everything will work out in Ireland with "your WALL and for your border." 🤔 #TrumpInIreland pic.twitter.com/2fc2TcUn79

To one person, it seemed that Trump knows nothing:

He doesn’t know anything about it just like he didn’t know what the NHS was. Ask him what the Good Friday agreement is and he’ll tell you it’s about clocking off early for the weekend

And yet another said their “jaw is dropping in astonishment”:

Across Ireland, people had planned to take to the streets to protest Trump’s presence in the country. In Dublin, thousands of people marched across the city to voice their anger at him and his policies:

Demonstration thousands-strong now. March is moving down O'Connell Street, to chants of "Donald Trump's not welcome here" and "Donald Trump go away". pic.twitter.com/8naMHvesvO

Thousands of people are protesting in Dublin against the visit of Donald Trump to Ireland #TrumpInIreland pic.twitter.com/uIO7YmGz8d

Protest all US presidents

O’Regan’s argument that Democrats and Republicans are often “just two cheeks of the same arse”, however, is an important one. Considering the role of the US in undermining human rights throughout the world – for many, many decades – people should really rethink the welcome they give to all US presidents.