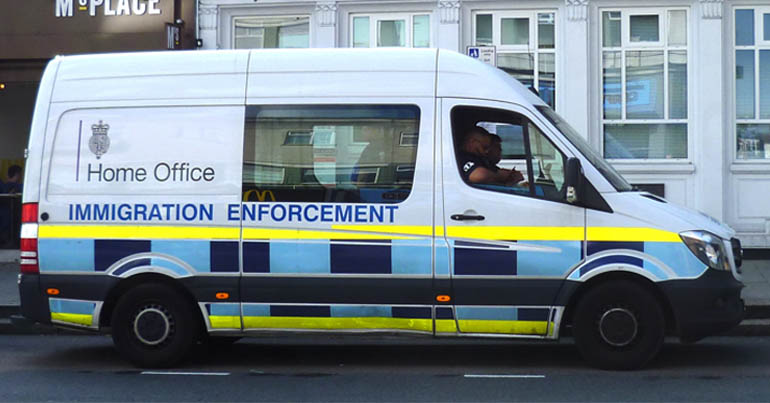 On 9 May, the independent chief inspector of borders and immigration (ICIBI), David Bolt, published his report on the government’s approach to illegal working in the UK. The review focuses mostly on the Home Office’s internal procedures. But one group spotted something to celebrate in the 94-page report.

On 3 June, immigrant support group Right to Remain said that “the public is turning against the Hostile Environment”. It referred to a section of ICIBI’s report titled ‘Inspection findings – Illegal working and Windrush’. This five-page portion of the report said the Windrush scandal has had a notable impact on immigration enforcement (IE). According to the report, it created a “negative impact on the front line” of enforcement. The report also went on to say:

The general view was that Windrush had fundamentally altered the environment in which IE operated… The work of the Illegal Working Steering Group had been paused as “[the] impact of Windrush had led to a situation where [other government departments] did not want to be seen working with us [IE].”

Right to Remain said this showed that “public solidarity and action” had been a “strong force for change” on points raised throughout ICIBI’s report.

The group also highlighted the effect of high-profile media reporting on the Windrush scandal. It said that, although it hadn’t resulted in a much-needed “culture-shift… at the Home Office”, such reporting had caused the public to find the UK’s border regime “increasingly unpalatable”. As a result, a focus group of IE managers said that, for those officers conducting immigration raids:

You could feel the atmosphere.

Right to Remain also pointed out that anti-raid activists have come under increasing scrutiny from IE. ICIBI’s report said IE had carried out numerous “Activist Intel Reports” since April 2016. And it seems that activists have increasingly disrupted the work of immigration and customs enforcement (ICE) teams. For example, IE teams completed 21 activist intel reports between 1 April and 18 October 2018. Previously, there had been 27 for the entire 2017/18 year. The Windrush scandal broke in April 2018.

We are committed to an immigration policy which welcomes and celebrates people here legally, but which tackles illegal immigration. Illegal working undercuts honest employers, puts vulnerable migrants at risk of exploitation, cheats legitimate job seekers out of employment and defrauds the public purse. Tackling this damaging crime is a key Government priority.

However, the UK’s ‘hostile environment’ policy has devastated people’s lives; not only those of the Windrush generation but people from across the world right up until today. The concept was introduced in 2012 by Theresa May when she was the head of the Home Office, and it will remain a particularly dark smear across her legacy.

Thankfully, the public hasn’t just sat back and let it happen. As Right to Remain showed, public solidarity and action have had tangible effects on IE. So we must extend that solidarity and all be ready to take action.