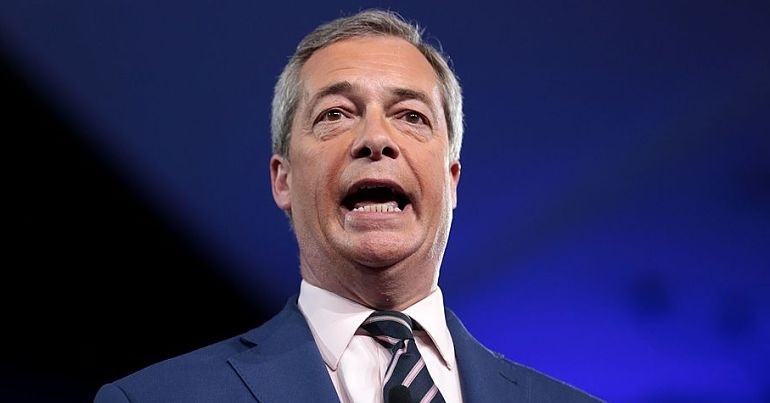 As the Guardian reports:

Brexit party insiders said Labour’s reliance upon a mainly Pakistani vote in inner-city wards had been the difference between the parties.

"Brexit party insiders said Labour’s reliance upon a mainly Pakistani vote in inner-city wards had been the difference between the parties. “Some of these houses had 14 people in them registered to vote".

And there we are. An openly racist party. Vile.https://t.co/8RgTgPzu0l

Brexit Party insiders say: “Some of these (Pakistani) houses had 14 people in them registered to vote. It would be interesting to see what proportion voted Labour."

The Brexit spokesman blamed their defeat on "Pakistanis in the inner city. Some of those houses have 14 people in them."
Exactly. Until we ban the poor and immigrants from voting, and give 1 vote to each house like in 1800, we'll never have a fair, democratic modern Britain.

On location, Sky News reported that Farage wasn’t around to help his failed candidate:

by the time he arrived at the count, the prospect of defeat was clearly too much to swallow. He evaded journalists waiting for him at the front entrance and came in by a side door.

He then hid in the inappropriately named Welcome Lounge and had a narrow escape when he left to go to the gents and was almost pursued inside by journalists and camera crews.

He then left the count before the declaration without giving any interviews, leaving his defeated candidate, millionaire former Tory donor Mike Greene, to face the media.

Jeremy Corbyn’s Labour defied expectations to see off the Brexit Party in Peterborough by 2% of the vote. The constituency voted by around 63% (scroll down for figure) to leave the EU.

In the by-election, the turnout was also nearly 20% lower than in 2017, which tends to be a negative for the official opposition. Still, while Labour’s overall voteshare went down, the party went from a 1.3% lead over the Conservatives in 2017 to a 9.5% lead.

In 2017, Labour gained the constituency from the Conservatives with a 12.5% increase in its vote share.

Labour strategists may see the 7 June result as a vindication of Corbyn’s position of avoiding becoming the party of Remain. Focusing on austerity, public services, and values could allow Labour to win seats in both Remain and Leave constituencies; whereas hard-lining for Remain could alienate too many voters in seats like Peterborough.

The win is no doubt a brilliant victory for those who reject former City banker Farage’s brand of immigrant scapegoating and fake anti-establishment opportunism. The Brexit Party insiders blaming Pakistani people for the loss sums that up.

Seeing off Farage in a 63% Leave constituency is a significant boost for Corbyn’s Labour.