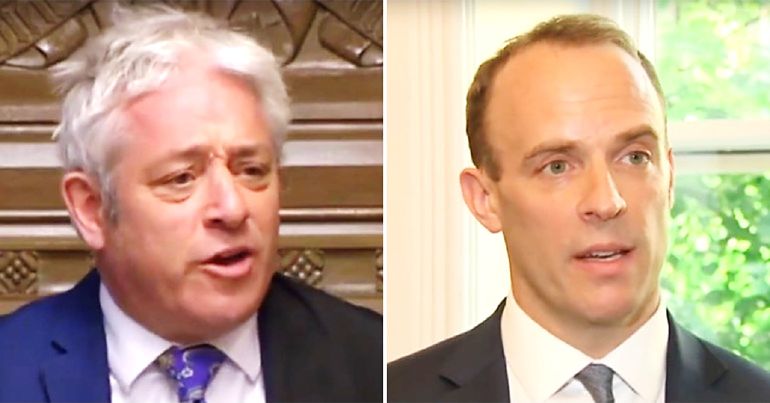 Speaker of the house of commons John Bercow has killed a Tory plan to bypass parliament and force through a hard no-deal Brexit.

But on 6 June, Bercow stated this was “simply not going to happen”.

They want to ‘prorogue’ parliament, whatever that means…

So, what was the scheme Raab and some other Conservatives had thought up?

It comes down to an obscure UK constitutional procedure known as ‘proroguing’ parliament. As the BBC explained:

Every parliamentary session… is ended when it is “prorogued” by the Queen.

The process essentially closes Parliament and ends the progress of current legislation until a new session begins.

Although it is technically at the Queen’s “command”, in practice it is the government’s decision of when it happens.

But how could Raab use this to push through a no-deal Brexit?

In theory, a new prime minister who feared MPs blocking Brexit could advise the queen to prorogue parliament. This would then stop MPs attending parliament.

Which Tories want to prorogue parliament?

Raab has led the calls:

Another advocate is Edward Leigh, who tweeted:

Solution: End this failed session immediately within hours of a new government and prorogue Parliament. Leave the EU on 31 October. If we don’t, we are betraying our supporters and ensuring a total wipe-out of the Conservative party.

Bercow having none of it

But when the prospect of proroguing parliament was raised with the speaker, Bercow made it clear he was having none of it:

"That's simply not going to happen. It's just so blindingly obvious"

Commons Speaker John Bercow rejects the suggestion a future PM could try to end the current session of Parliament in order to push through a no-deal #Brexithttps://t.co/9jGXaYS1JC pic.twitter.com/0L0BI6xUXU

Parliament will not be evacuated from the centre stage of the decision-making process on this important matter. That’s simply not going to happen. It’s just so blindingly obvious, that it almost doesn’t need to be stated, but apparently it does, and therefore I have done.

Tories and a former speaker unimpressed too

Other Conservative leadership contenders have also dismissed the idea. Both Rory Stewart and Matt Hancock argued it undermined democracy:

“It would be illegal… it would be unconstitutional and it would be undemocratic”@RoryStewartUK reacts to Dominic Raab saying he could prorogue Parliament to force through a no-deal Brexit #Peston pic.twitter.com/2HhpQ2ROwe

I think it’s outrageous to consider proroguing parliament. We are not Stuart kings.

wants to become prime minister by pitching to a very narrow slice of the electorate – members of the Conservative party who mostly voted for Nigel Farage… [he] thinks he can win their support by stopping either MPs or the public having the final say on Brexit.

But I have a message for this ambitious young man: you don’t treat our parliament, our democracy or our people that way. If you even try to impose your No Deal Brexit on us by cancelling parliamentary proceedings, you won’t survive as prime minister for five minutes, you will be booted out of office and you are not worthy of your seat in parliament which should be reserved for those who deserve the title of democrats.

What happened to sovereignty?

The idea may have little power anyway. The former secretary of state for constitutional affairs Charlie Falconer said:

To prorogue Parliament with the express purpose of preventing it from considering Brexit to facilitate No Deal would be unlawful, and would be set aside by the courts. https://t.co/D2JdgGu9lc

Unlawful or not, the idea shows the undemocratic lengths some hard Brexit supporters are now willing to go to.