She’s only 6 months into her term, but Ocasio-Cortez is on a roll in sticking it to the establishment - Canary 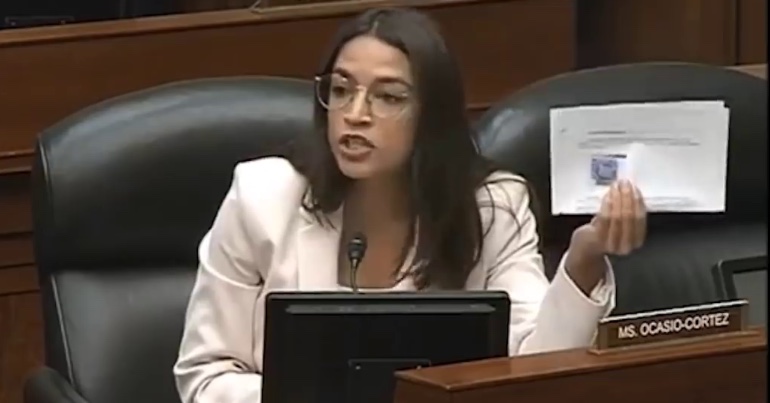 US congresswoman Alexandria Ocasio-Cortez continues to be a thorn in the side of the establishment, even though she’s only been in the job for 6 months. Over the last few weeks, for example, she’s obliterated the idea that a free market exists in the US; she’s taken aim at social media giants allowing hate to spread on their sites; and she’s argued that the US minimum wage needs to increase.

Ocasio-Cortez attacked the idea of a free market during a congressional hearing. She was questioning a representative of TransDigm, a military contractor, when she revealed the massive amount of money it charges the taxpayer. TransDigm billed the taxpayer $1,443 for a part that costs $32 dollars to make. The company, she said, had gone on to charge $215,007 for 149 of these parts. But the cost price of these same parts would have come to $4,768.

She told the representative:

I could have gotten over 1,500 people insulin for the cost of the margin of your price gouging

After asking how many other competitors the company has, Ocasio-Cortez took aim at the idea of a free market. She said she doesn’t think most people understand what it means, as “it’s not a free market at all”. Instead, she insisted:

As a result of the hearing, Ocasio-Cortez and her colleagues were “able to secure $16 million in refunds from TransDigm for egregious price gouging”:

As a result this hearing (chaired by @RoKhanna!), we were able to secure $16 million in refunds from TransDigm for egregious price gouging in military contracts.

For all their talk of “free markets,” CEOs actually work *against* them. They want CAPTIVE markets + monopoly power. https://t.co/jOtKPtRWGv

The congresswoman has also taken aim at social media giants. In particular, she’s taken them to task for allowing hate speech to flourish on their platforms. On Twitter, she declared that racism and hate is “rewarded” by social media companies:

The holy grail of many social platforms is “engagement.”

Bigotry + disinformation campaigns are often the most “engaging” (& rewarded) due to their inflammatory nature.

Some, like Pinterest+Reddit, at least TRY to address this.

Others decide profit is worth the social erosion. https://t.co/XLazGlw0nV

She also claimed that young people are leaving Facebook because of the “toxicity” that the company allows there: 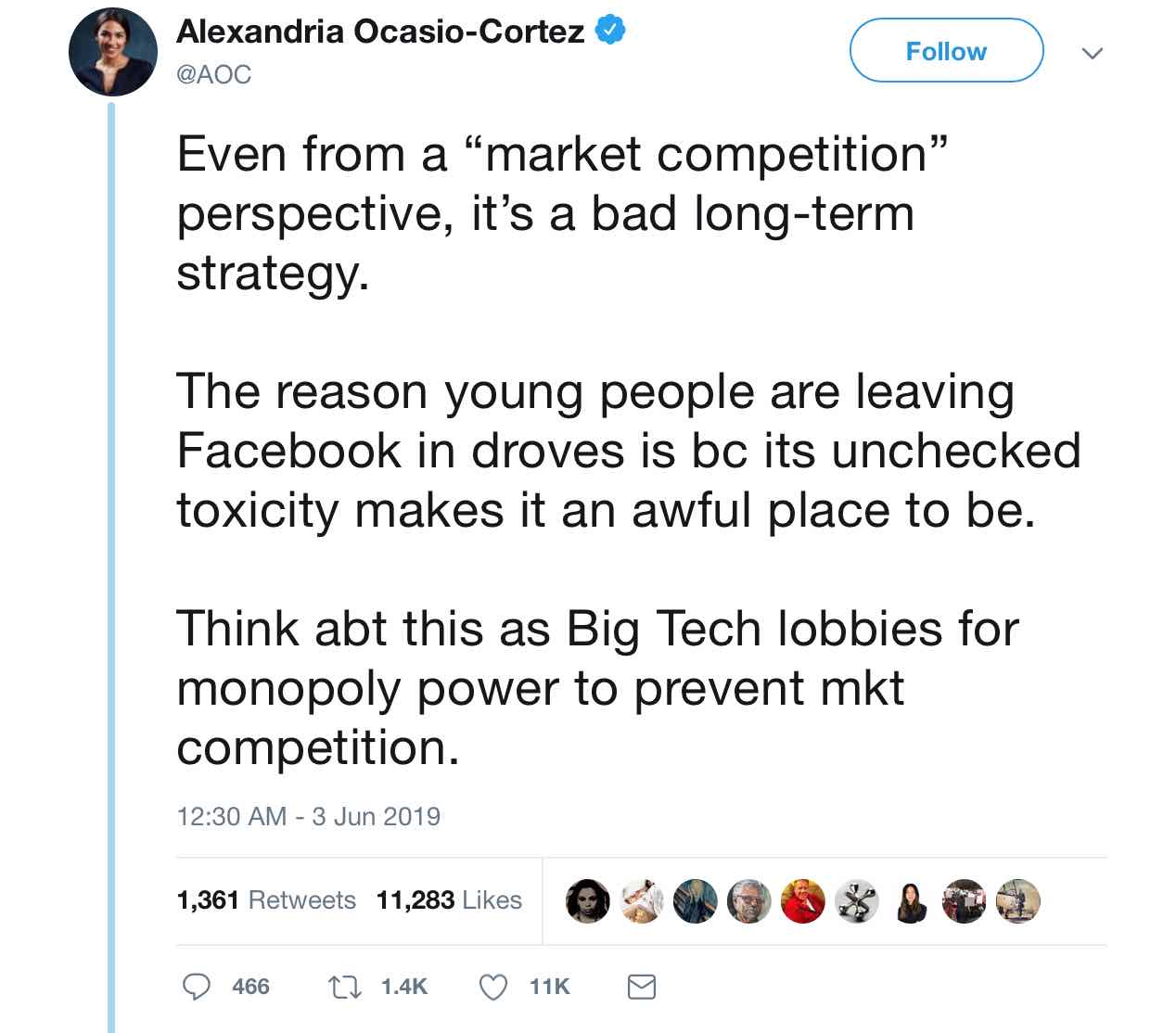 And she ended by asking if social media companies had actually done anything to address the problem: 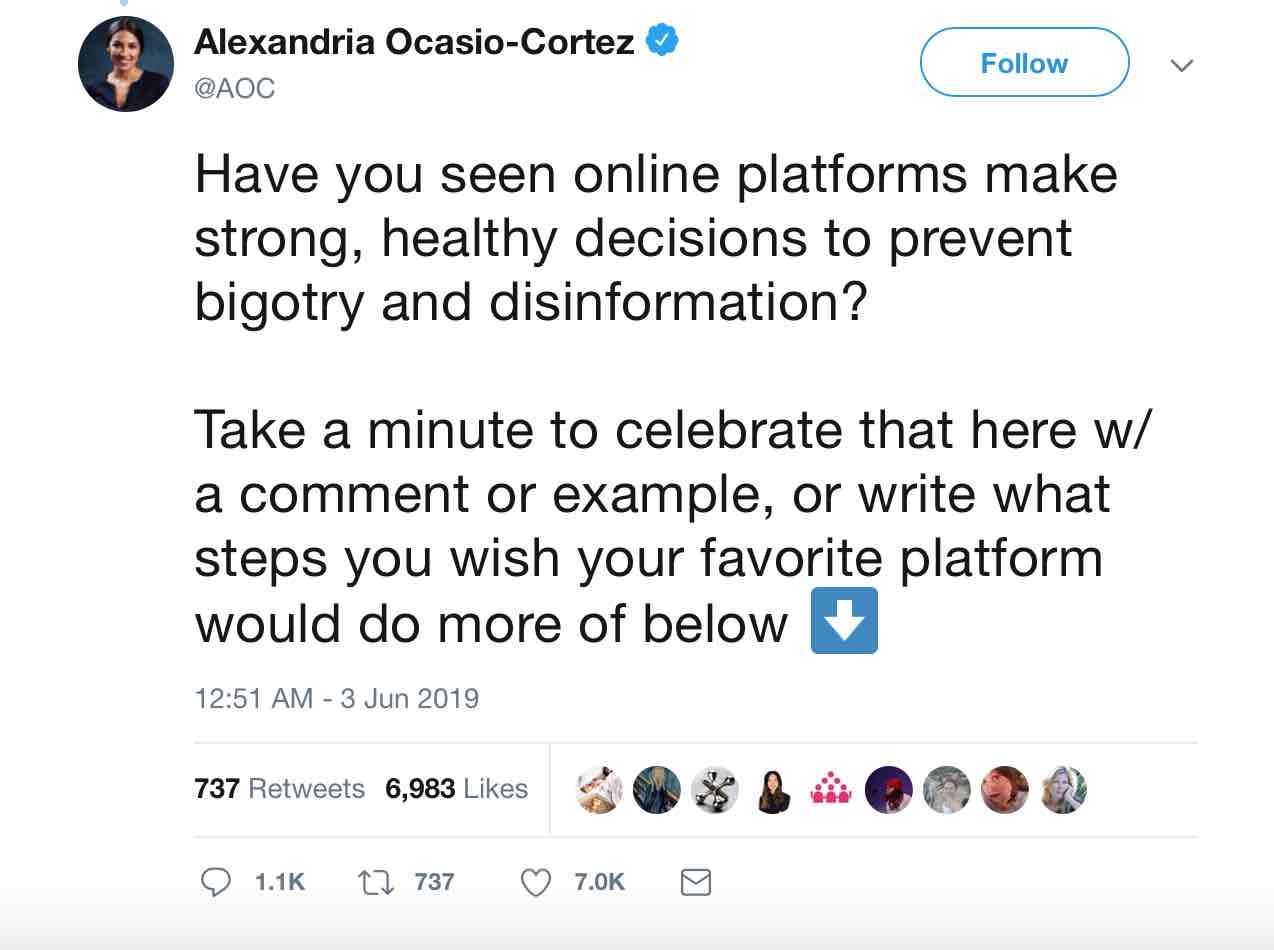 Ocasio-Cortez has also called for the government to raise the minimum wage. She proclaimed that:

Any job that pays $2.13 an hour is not a job. It’s indentured servitude.

She was referring to the fact that employers can pay workers who earn tips less than other non-tipped workers. According to federal law, an employer only has to pay a tipped worker a minimum of $2.13 per hour.

@AOC: "Any job that pays $2.13 an hour is not a job. It's indentured servitude." pic.twitter.com/BqI5TPeSXT

the way that we give labour dignity is by paying people the respect and the value that they are worth at minimum.

And for this reason, she has called for an increase in the national minimum wage to $15 per hour. She previously worked as a bartender before her election to congress.

"All labor has dignity," @AOC says. "We have to raise the national minimum wage to $15 an hour" pic.twitter.com/1lKIDJCOn4

The kind of politician the world needs

Ocasio-Cortez has only been in office for a short amount of time. But in spite of this, she’s done a lot to show us that she takes her job seriously, and also that she cares about the people who voted for her.

We need more politicians like her — politicians who understand injustice and want to fight it. If we had more like her, perhaps our societies would be more just, fair, and equal.