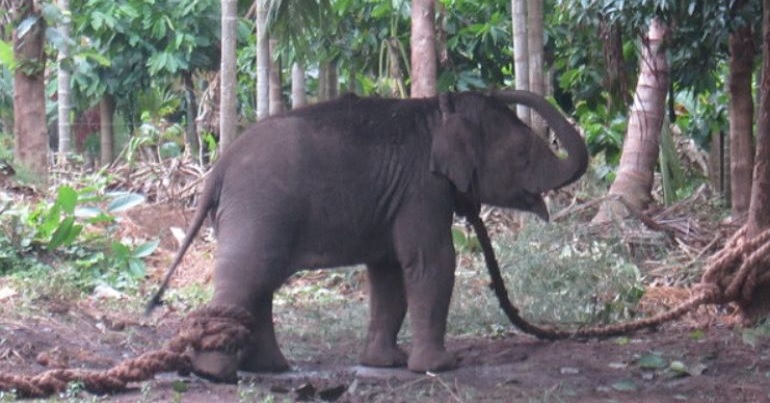 Save the Asian Elephants (STAE) is a coalition of conservationists, lawyers, and campaigners fighting against what Action for Elephants UK says is “arguably the worst case of animal cruelty in the world”. And now, the group is taking its fight to the heart of UK politics.

Plight of the Asian elephant

As The Canary previously reported, Asian elephants used in festivals and tourism are often treated horrendously. Their ‘keepers’ (mahouts) routinely beat, starve, stab, chain, and physically ‘crush’ them to ‘break their spirits’ and make them compliant. As STAE’s founder Duncan McNair explained during a speech at the 2019 Conservative Party conference:

Many embrace a free market – but surely not one that sets as a standard the brutal beating, stabbing, whipping of baby elephants, the smashing of legs, the putting out of eyes, screaming and crying as an introduction to the abuse and psychological trauma that will define the rest of their lives in captivity for tourism…

This brutality is “pajan” meaning the breaking of the spirits

In a previous interview with The Canary, McNair also explained that – once the elephants are “forced into service” – the torture continues:

Furthermore, McNair said this violent treatment of elephants by mahouts is a relatively new phenomenon:

In days gone by, the relationship between the mahout and the elephant itself was built on a long bond of trust…

The big change came… 40 or 50 years ago, with the arrival of package holidays and the intensive commercialisation of elephants for use in tourism, largely from the West.

The UK tourism industry plays a major role in propping up this cruelty. According to McNair:

many dozens (including virtually all the largest) of the corporate members of the dominant Association of British Travel Agents (ABTA), persist in sending their paying customers to the most brutal (for elephants) and the most deadly (for tourists) of all elephant “attractions”.

ABTA – a membership organisation for travel agents – will publish new animal welfare guidelines by the end of the year. It already deems activities involving unnatural behaviours, such as painting and sports, as unacceptable. In a statement, an ABTA spokesperson told The Canary:

ABTA is updating its Animal Welfare Guidelines. The new updates, which will include tourist contact or feeding of elephants without a barrier as unacceptable, have been developed through ABTA’s Animal Welfare Working Group with Members and engagement with wider stakeholders such as NGOs, including World Animal Protection.

ABTA has and is leading the way in the travel industry to raise standards as part of its role to provide advice, guidance and tools to its Members to support them to implement approaches that respect animal welfare.

ABTA has also worked with Action for Elephants UK, Humane Society International, and Mahouts Elephant Foundation in developing the new guidelines. But as the organisation points out itself, it doesn’t “have the powers to make legally enforceable regulation”. Nor does it appear to be planning to create mechanisms whereby it enforces the guidelines internally, i.e. by expelling members who don’t abide by them.

That’s why STAE is looking to parliament for solutions.

Ultimately, as McNair explained in his speech, STAE is calling for parliament to legislate “to ban the advertising, promotion or sale of unethical Asian elephant-related holidays”. It acknowledges ABTA’s upcoming revised guidelines but says “such blandishments have proved empty so often”. McNair argues:

Asian elephants in their agony and near their final stand, down from millions to just 40,000 or so (barely 7% the numbers of African elephants) deserve better: not more broken promises and failed self-regulation but a UK law to ban such advertising.

To this end, STAE has already met with DEFRA minister Zac Goldsmith to discuss the situation. It says it will also meet with shadow DEFRA secretary Sue Hayman in the not too distant future. Furthermore, the issue will soon be the focus of an Early Day Motion (EDM), which STAE says Labour MP Rupa Huq will table. It will read:

That this House is concerned about the increasing risk of extinction to Asian elephants; notes that in India and South East Asia they are snatched from the wild when very young, deprived of food and water for months whilst tightly confined in cages, then beaten and stabbed with iron hooks to severely wound them in order to break their spirits for easy use in tourism and tortured throughout their lives; notes that these stressed animals sometimes attack and kill tourists; that such tourism is in part driven by companies advertising to the UK market; and calls on the Government to prohibit the advertising of elephant attractions other than genuine sanctuaries.

There should be a ban on companies sending unsuspecting British tourists to elephant attractions that involve such horrendous treatment. That the Asian elephant is endangered makes it even worse, as around half of the elephant calves snatched from the wild for tourism die during the torture of pajan.

A law to stop Britain’s involvement in this awful practice should be a no-brainer.