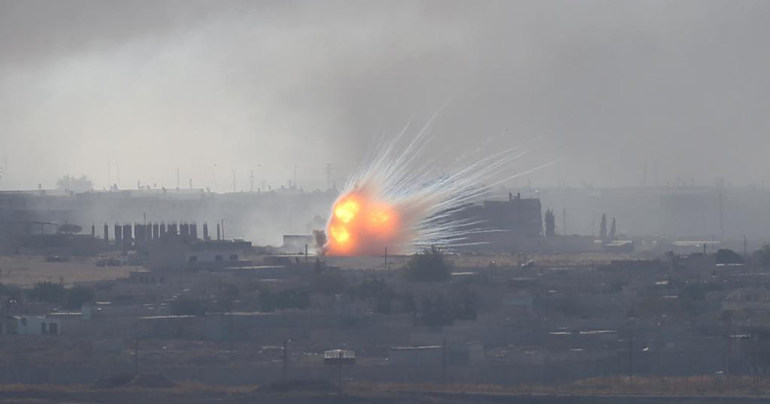 Warning: this article contains images that some readers may find distressing

Social media has been swamped with photos and videos of people with burns so horrific that it’s a miracle they’ve survived. Turkey has been accused of using white phosphorus on the people of northern Syria (aka Rojava), yet governments around the world remain silent.

And it’s no surprise. After all, the US-led coalition has previously used white phosphorus in Syria and Iraq. As Hamish de Bretton-Gordon – a former commander of the UK’s chemical, biological, radiological and nuclear regiment – said, “unfortunately its use has become increasingly normalised”.

“Turkey must be held responsible”

On 18 October, Hawar News shared a distressing video on YouTube. The Canary has not been able to verify the accuracy of this video, but it appeared to show horrific injuries caused by what may be chemical weapons.

Although this indicates chemical weapons may have been used, the Kurdish Red Crescent said in a statement that:

We… can not confirm the use of chemical weapons yet, but [are] working together with our international partners to investigate this subject.

Kati Piri, the European parliament rapporteur for Turkey, stated that if Turkey is found to have used chemical weapons, it must be held to account:

Turkey must be held responsible for war crimes committed against Kurdish civilians. The use of white phosphorus is not only cruel but also strictly prohibited by international law. https://t.co/6eVf4Ne5nm

On 18 October, the Organisation for the Prohibition of Chemical Weapons (OPCW) stated that “it was aware of the situation and is collecting information with regard to possible use of chemical weapons”. Just one day earlier, the OPCW reported that it had accepted money from the Turkish state to help upgrade its Laboratory and Equipment Store. Şaban Dişli, Turkey’s representative to the OPCW, said:

This contribution is another display of the strong commitment of Turkey to the Chemical Weapons Convention and to the OPCW.

The Canary contacted the OPCW for comment. A spokesperson said:

The OPCW is aware of the situation in northern Syria and is collecting information at OPCW Headquarters with regard to the alleged use of chemical weapons. So far, the OPCW has not yet determined the credibility of these allegations.

The OPCW continues to monitor the situation.

The OPCW has not launched an investigation, and it has no indication so far of the use of any specific toxic chemical as a weapon. Note that the term “investigation” has a specific meaning for OPCW activities relating to mandates, deployments, etc.

In terms of the donation of the Government of Turkey to the OPCW for building the new Centre of Chemistry and Technology, Turkey is one of many OPCW Member States that have made such a voluntary contribution to this initiative, which began over two years ago.  Discussions with the Turkish delegation began several months ago.

There is no further information at this time.

Turkey has used increasingly violent tactics to ethnically cleanse Rojava of its majority-Kurdish population. On 18 October, Amnesty International announced that Turkey was “carrying out serious violations and war crimes”.

The Canary has previously reported that:

Numerous Turkish-backed Islamist and jihadist brigades [have] swept across the border in a terrifying killing spree. One of the more appalling killings was that of Syrian-based Kurdish politician and human rights advocate Hevrin Khalef. Her body was mutilated.

The Turkish-led forces’ torture and mutilation of people in Rojava is nothing new. When Turkey invaded and occupied Afrin in 2018, similar atrocities were carried out. The Rojava Information Center reported that the Turkish-backed Free Syrian Army raped and mutilated women and girls in Afrin.

In May 2018, The Canary also revealed that “the Permanent Peoples’ Tribunal (PPT) found [Turkish leader Recep Tayyip] Erdoğan and the Turkish state guilty of war crimes, as well as crimes against humanity, against the Kurdish people”.

On 15 October, the British government announced that it would suspend future arms sales to Turkey. But it made no mention of stopping existing contracts. Berivan Qereçox, a British internationalist currently in Rojava, told The Canary:

The power lies with us

We know that we can’t trust our government to stand up to its powerful NATO ally. That’s why people are taking action, right now. Thousands around the world have been occupying the streets to protest against Turkey, while others have been blockading arms factories and Turkish Airlines check-in desks. For as long as Turkey continues its war on the Kurdish people, people must continue to take action.