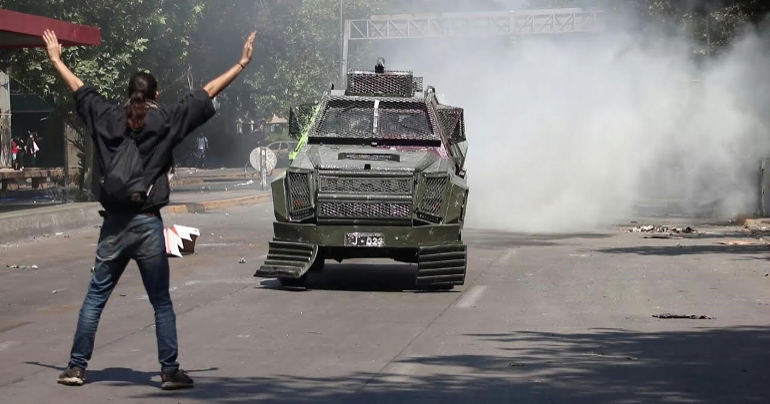 Chile’s hard-right government has declared a state of emergency, deploying thousands of troops and police onto its streets. They’re using live bullets, tear gas, and water cannons on protesters. 11 people have reportedly died so far and almost 1,500 have been detained.

The state declared martial law after days of protests against public transport fare increases. During these protests, footage of extreme police violence spread on social media, with authorities shooting people with live ammunition. Demonstrators responded with anger, blockading neighbourhoods, burning buses, and using burning barricades. And troops were sent on the streets to terrorise protesters.

Hundreds of students once again occupied metro stations in Chile's capital Santiago, in order to allow users to travel free, after ticket prices rose to over $1, one of the most expensive transportation costs in the region.pic.twitter.com/e76bfOijbz

My country, Chile.
Against the right-wing government (US puppet) and its pigs (police). 👏

The Chilean gov't is firing live bullets to its citizens after it imposed curfew. The protests erupted last week as gov't plans of train fare hikes ahead of APEC Summit. Machine guns and full combat troops are now deployed
PLEASE #StandWithChile #ChileResiste ✊🏾 https://t.co/LcUPmc1FDf

This is NoT #Venezuela, it is #Chile today, military forces killing people on the street, where is #un #HumanRights and @mbachelet #Piñerarenuncia #ToqueQueda #Cacerolazos pic.twitter.com/s6l057uClm

THIS IS CHILE RIGHT NOW.
The government set the military on the streets just because people were demanding rights. Salaries aren’t enough.
WE ARE A DISARMED COUNTRY. They fight us with guns and we have bare hands.
Media is censoring this, please RT. MAKE THE WORLD SEE.🇨🇱🇨🇱 pic.twitter.com/jLrPwW7G75

New music clip by Chilean singer/rapper @anatijoux about the current uprising against the government in Chile and the repression by state security forces. It's called #Cacerolazo which refers to the banging of pots and pans, a traditional form protest in Latin America. pic.twitter.com/BbSrO0wG4L

At the weekend, Chilean president Sebastián Piñera announced that he would no longer increase the cost of transport. But protesters want to make it clear that they’re not only out on the streets because of fare increases. With extremely low wages and a high cost of living, people have simply had enough.

Rent, electricity, transportations, health, education and food are not affordable; and people are struggling to make ends meet, as the cost of living keep rising.

People won’t stay silent any more, we will fight for our liberty and rights to protest and be respected and treated in a dignified way.

Others tweeted about the real reasons for the unrest:

The Western media will make out this is all about a fare increase but it’s actually about years of unfettered neoliberalism, mass privatization and poverty in one of the most unequal societies in the world #ChileResiste pic.twitter.com/vzbkfYdnLf

The whole country remains under a state of emergency, more and more people are being injured, and the death toll is growing. The world must not turn a blind eye.