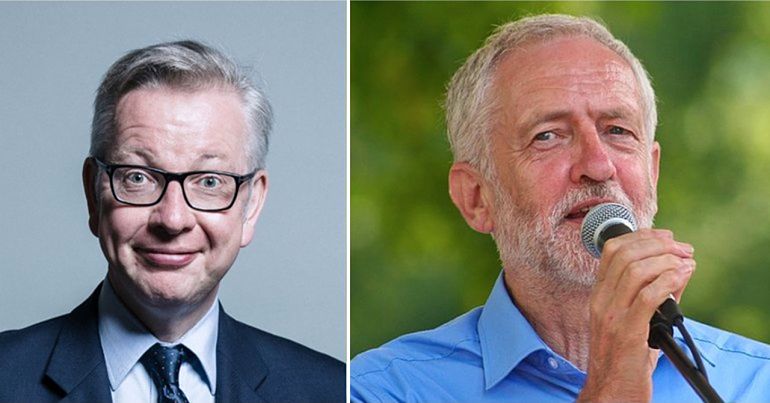 Conservative cabinet minister Michael Gove appeared to breach the International Holocaust Remembrance Alliance’s (IHRA) definition of antisemitism during a late-night Twitter spat at the weekend. Gove began peppering left-wing accounts with tweets about antisemitism on Sunday, following a Sunday Telegraph front page on the issue. However, Gove himself breached the IHRA definition of antisemitism in at least one of the tweets, by conflating Jewish people with Israel.

Whereby Michael Gove violates the IHRA definition of antisemitism whilst accusing Labour & others of antisemitism. The next six weeks will be hell for me and many other Jews. We aren't your bloody stick or election shtick you #ToryShmock #ConservativeAntisemitism #VoteLabour2019 https://t.co/p8GcVHQiBm

But those affected by the tweet can’t hold Gove to the IHRA standard. Because, despite intense pressure for Labour to adopt the widely-criticised definition of antisemitism, the Conservative Party has so far refused. And that’s what makes this Twitter war all the more bizarre.

The Sunday Telegraph ran with Tory chair James Cleverly’s claim that, in the event of a Corbyn government, Jewish families were ready to flee the country. This follows a string of such stories from Britain’s almost-universally conservative press. Just the other day it was the “super rich” ready to flee. Now Jews. Perhaps tomorrow it’ll be stamp collectors. Who knows?

But many British Jews are sick and tired of having their ethnic and / or religious identity weaponised for political purposes.

I’m one among tens of thousands of British Jews with absolutely no intention of leaving the country if Corbyn becomes PM. Yes, Antisemitism exists but the data (from reputable Jewish research) shows it’s a bigger problem on the Right than the Left. #StopFearMongering #FightRacism pic.twitter.com/bW0OSTnB8c

I am Jewish. Like many Jews I support Corbyn. Sadly the media ignores us.

It is true that many in the Jewish community are worried about Corbyn. Appallingly, they have been made fearful by the media & others with NO proper grounds.

Jewish community has ZERO to fear from Corbyn. https://t.co/hMtqKKCYkw

This quote is from a non-Jewish Tory leader—not from any Jews.

But to be fair, running a politically motivated quote from a gentile speculating about how Jews feel as if it were an actual Jewish perspective is an extremely on-brand British way to combat perceived antisemitism. https://t.co/hBYM412aGX

But rather than address these concerns, Gove took it upon himself to launch a bizarre Twitter war against left-wing accounts. First of all, he shared an antisemitic tweet, claiming it came from a Corbyn supporter. But on closer inspection, it appeared this might not be the case.

So what’s happened here is Michael Gove has boosted what looks like a fake account (180 followers), pretending to be a Momentum member, to smear me and others by association.

I, of course, condemn all antisemitism and racism. I also condemn these politically underhand tactics. https://t.co/GCQEfgtyhq

The account had just 180 followers, and the tweets are now protected. Gove himself promoted the tweet for political leverage. And claiming any bona fide connection to Corbyn, or the Labour movement more widely, is clearly ridiculous. It’s tantamount to claiming a drunk bloke ranting at a passersby in the high street is speaking for Labour because he happens to be wearing a red t-shirt.

When people began to point this out, Gove went on a Twitter spree.

Dear @AyoCaesar – will you take this opportunity to condemn the anti-semitism within Labour which has caused such pain within our Jewish community and distance yourself from Corbyn’s discourse on Hamas and Hezbollah when he calls these racists “friends”? https://t.co/Hzb6TjfU8U

Then to Momentum chief Laura Parker:

Dear @ParkerCiccone – thank you for your tweet – and I have no doubt about your sincerity. But what is being done to deal with the anti-semitism within Labour that leads @KarenPollock100 to be so concerned? Will you denounce Corbyn’s support for Hamas? https://t.co/CBVhglAJBB

It was in a tweet to Aaron Bastani of Novara Media that Gove came unstuck.

Dear @AaronBastani – I know you’re a decent and moral person – but you and others must do far more to
root out the anti-semitism in your party – our Jewish friends and neighbours fear a Corbyn Government – time for you to stand with them and Israel https://t.co/2povxkAsQl

In this tweet, Michael Gove conflates British Jews and Israel. Not one, but two examples of antisemitism in the IHRA code focus on this issue.

Whereby Michael Gove violates the IHRA definition of antisemitism whilst accusing Labour & others of antisemitism. The next six weeks will be hell for me and many other Jews. We aren't your bloody stick or election shtick you #ToryShmock #ConservativeAntisemitism #VoteLabour2019 https://t.co/p8GcVHQiBm

The moment when a "tired" government minister fights antisemitism WITH antisemitism
Why should British Jews stand with Israel Mr Gove?
Isn't that trope barred by the IHRA definition?
Perhaps you need to re-read your party's code of conduct
Mr @JamesCleverly may have a copy handy https://t.co/8RdCwerQdd

If Gove was in the shadow cabinet, he’d likely already be on the way to suspension. Labour MP Chris Williamson was suspended for far less. And herein lies the issue. Not only is Labour being held to a double standard, but the standard itself is arbitrary and pointless.

In fact, on 31 October, Netanyahu’s son Yair spoke in Hungary to endorse publicly a government-promoted antisemitic conspiracy theory. Namely, that Jewish billionaire George Soros (allied with the European Union) is out to “destroy” Israel and Hungary from within on behalf of “globalist elites”. Yair Netanyahu went on to argue that Soros and his cabal want to destroy the national identities of European countries and the US too. So antisemites in Hungary, racists in the US, and anti-Palestinians in Israel should unite to tackle the issue.

This also breaches the IHRA definition, one of the examples of which clearly states:

Making mendacious, dehumanizing, demonizing, or stereotypical allegations about Jews as such or the power of Jews as collective — such as, especially but not exclusively, the myth about a world Jewish conspiracy or of Jews controlling the media, economy, government or other societal institutions.

George #Soros's network wants to destroy #Israel from within, @YairNetanyahu told the #Hungary-an press in Budapest. According to the Israeli PM's son, both his father and Viktor #Orban are being attacked for not serving the globalist elites. https://t.co/o2PD2RA12C

In short, Yair Netanyahu is rubber-stamping one of the most insidious antisemitic conspiracy theories in history, to weaponise it against left-wing, anti-zionist Jews. Not only is the IHRA failing to prevent this, but through its creation of a ‘new antisemitism’ definition to deter criticism of Israel, it’s actually helping the process along.

For a fuller critique of the IHRA, David Rosenberg’s piece for Open Democracy is a pretty great entry point. But in summary, the definition provides 11 examples of antisemitism, six of which mention Israel, while one refers to “it” meaning the State of Israel. As Rosenberg states, this is with the main purpose of:

defending the Israeli government’s increasingly indefensible policies from attack by supporters of human rights, by anti-racists, and by growing numbers of dissident Jews in Europe, America, South Africa, and also in Israel. If you can label such critics as anti-Semites, you can hope to nullify their impact among the wider population and on political actors who might challenge the continued oppression of the Palestinians.

This has seen a rise in commentators and politicians alike wilfully conflating Jewishness with Israel in order to dismiss criticism of the latter as antisemitic. In doing so, they demean very real and toxic antisemitism, while shielding perpetrators of racism and antisemitism from proper scrutiny.

This definition is an absurdity, weaponised by racists in the pursuit of Apartheid. And no amount of tweets by Michael Gove will convince sensible people otherwise.