As Priti Patel lies about the London attacker, Corbyn offers hope for the future - The Canary 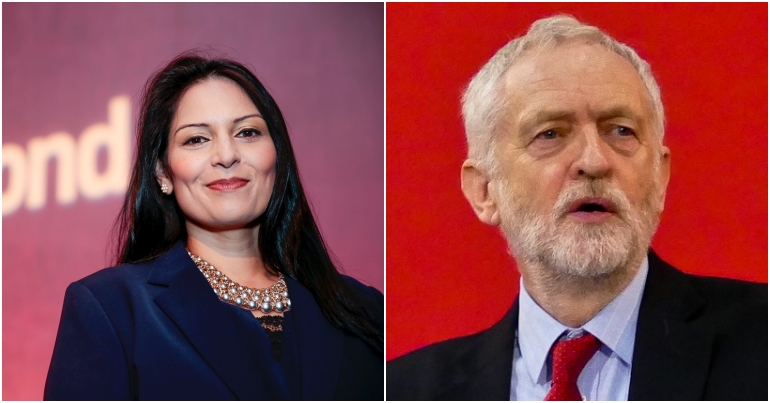 Priti Patel has taken to Twitter to lie about the London Bridge attacker. In fact, the lies contained in her tweet are so obvious, that people – from journalists to lawyers – are literally begging her to stop. What’s even more embarrassing is that as Conservative home secretary, Patel should know more about law and order than she clearly does.

But while Patel and other leading Tories keep lying, Jeremy Corbyn is offering hope for the future. Because Corbyn recognises the circumstances that created a breeding ground for terrorism are complex. And a Labour government with a radically different foreign policy could stop future attacks occurring.

While people are reeling from the terrorist attack, the father of Jack Merritt, one of those killed, made the following plea:

My son, Jack, who was killed in this attack, would not wish his death to be used as the pretext for more draconian sentences or for detaining people unnecessarily.

Something which most Conservative politicians are wilfully ignoring. But even worse, Tory MPs are actively lying about where the blame lies for the attacks.

Because legislation brought in by your government in 2008 meant that dangerous terrorists had to automatically be released after half of their jail term. Conservatives changed the law in 2012 to end your automatic release policy but Khan was convicted before this. https://t.co/8fCm880MSK

Usman Khan, the London attacker who was shot by police, was sentenced to an indeterminate public protection sentence (IPP) sentence in 2012. But IPPs were abolished and the Court of Appeal fixed the sentence to 16 years in 2013. Khan served half of this sentence before being released. All this happened under Conservative-led governments.

Furthermore, under the Tories, probation services have been drastically cut and partially privatised. One probation worker wrote the following during the discussion over the release of rapist John Worboys – another IPP prisoner.

Probation officers used to be able to take the time to understand the individual and be responsive to their needs. But in 2014, the probation service split in two, and the work has been draining and mentally exhausting ever since. Now, the NPS only works with the most dangerous offenders – those deemed high risk – the rest are supervised by private community rehabilitation companies (CRCs).

Today the job is about fire-fighting, to get assessments done and targets hit. We just have to hope that nothing goes wrong.

On Twitter, a retired lawyer set the record straight:

He was sentenced in February 2012

All when Cameron was Prime Minister and May was Home Sec

The Secret Barrister has forensically taken the case apart and pointed out the following in relation to Boris Johnson’s lies:

This is a lie. Many types of sentence have long been available to courts to ensure that a dangerous offender was not automatically released. Stop lying.

And they weren’t the only person begging Patel to stop. As Aaron Bastani from Novara Media tweeted:

please stop lying literally all of the time https://t.co/F3nqa7G568

So far, this election campaign has been populated by lies from Conservative politicians. Whether it’s claims over the number of hospitals promised, the number of nurses or lies about Labour’s tax plans, the Tories can’t seem to help themselves.

And even if Patel is given the benefit of the doubt and her lying wasn’t deliberate, she hasn’t deleted the tweet or apologised for getting it wrong. So if she really believes what she’s saying, she’s displaying a woeful ignorance for someone who’s supposed to be in charge of our criminal justice system.

A different approach is needed

Moreover, even in some bizarre alternative universe where Patel is right about why Khan was released, there are still fundamental questions about prisons and sentencing that need addressing. Especially given there are still 2,223 people languishing in prison on IPPs that have destroyed lives.

Locking people up doesn’t solve the problem. As Jeremy Corbyn stated, the “war on terror has manifestly failed”. He continued:

Sixteen years ago, I warned against the invasion and occupation of Iraq. I said it would set off a spiral of conflict, hate, misery and desperation that will fuel the wars, the conflict, the terrorism and the misery of future generations. It did, and we are still living with the consequences today.

The war on terror has manifestly failed. Britain’s repeated military interventions in North Africa, the Middle East and South Asia have exacerbated, rather than resolved the problems.

And this is why a different approach is needed. Whether it’s Johnson and Patel, or Tony Blair and Gordon Brown, decades of successive governments have pursued foreign policies based on profit – whether that be from oil or arms sales – over a safe future. If we want to stop further terrorist attacks, locking people up for longer isn’t the answer. And a Corbyn government and a radically overhauled foreign policy is the best opportunity we have of making the world a safer place and stopping the next generation of potential terrorists.