Remember when John Bercow gutted the smear campaign against Jeremy Corbyn? It was a powerful moment. - Canary 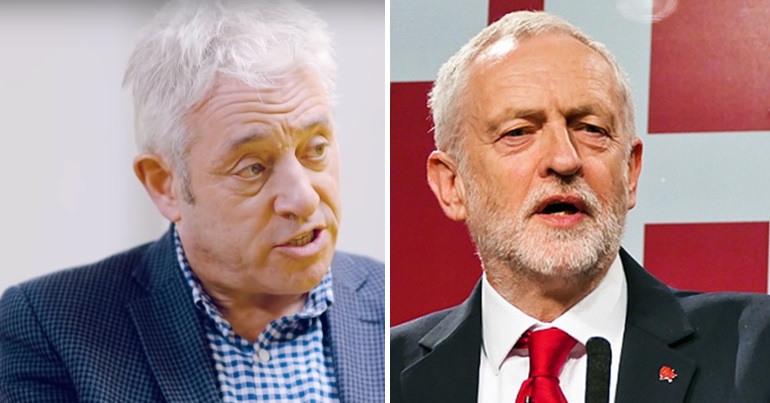 Jeremy Corbyn has reportedly nominated former speaker of the House of Commons John Bercow for a peerage. There are now rumours that Johnson may seek to block Bercow from entering the House of Lords. But while many commentators focus on Bercow being a thorn in the side of his Conservative Party, there’s one link between Corbyn and Bercow that few are talking about.

In 2019, Bercow delivered a solid takedown of anti-Corbyn smears. And as Labour leadership candidates try to avoid smears themselves, it’s perhaps more important than ever that we listen to Bercow’s words on the issue.

Corbyn’s opponents have pushed the highly misleading idea of an antisemitism ‘crisis’ within the Labour Party for years; and mainstream media outlets have put out “misleading”, ‘distorted’, and “inaccurate” coverage exaggerating the scale of allegations. The scourge of antisemitism exists throughout society (though particularly on the far right), and Labour insists that antisemitism and all forms of discrimination are totally unacceptable. Accordingly, the party has taken consistently firm action against such racism in recent years. Allegations of antisemitism in the party, however, reportedly relate to around 0.06% of the party’s 500,000+ members. And if anything, antisemitism among Labour supporters may have actually fallen under Corbyn’s leadership. Corbyn himself is a peace–prize winner who has fought against antisemitism all his life.

Bercow, who is Jewish and has known Corbyn “very well” for over two decades, spoke about the issue late last year. He stressed that “racism is a challenge across society”, and that:

I myself have never experienced antisemitism from a member of the Labour Party – point one. And point two – though there is a big issue, and it has to be addressed, I do not myself believe Jeremy Corbyn is antisemitic. That is my honest view.

Jewish ex-Speaker John Bercow was asked by @campbellclaret about @UKLabour antisemitism. Bercow, criticising him for placing Jews above other minorities, said he had never experienced antisemitism from Labour members and he said he did not believe @jeremycorbyn to be antisemitic pic.twitter.com/mIYtEeV2dA

Yet the smear campaign rolls on…

True antisemitism always requires condemnation. Corbyn and his supporters, however, have faced constant right-wing smears which have weaponised and amplified antisemitism allegations to undermine his public popularity. This is a tactic that the pro-Israel right has been using heavily in recent years to attack Corbyn and other left-wing allies of the occupied Palestinian people. A number of prominent Jewish left-wingers have vocally opposed this propaganda campaign.

But the smears aren’t going away just because Corbyn’s stepping down as Labour leader. The right-wing Board of Deputies of British Jews (BoD), for example, has pushed all five candidates for Labour leader to back a highly controversial list of demands. Many Jewish left-wingers, however, have opposed the candidates’ endorsement of this divisive list – which, as Jewish Canary editor Emily Apple has written, essentially asks Labour to “ignore socialist Jews” and “Jews who don’t support the actions of the Israeli state”.

Deputy leadership candidate Richard Burgon has faced the anger of the BoD over his refusal to back its demands. But a statement from campaign group Labour Against the Witchhunt (LAW) has praised Burgon’s stance. It quotes him explaining at the recent hustings in Liverpool that:

I have not signed and will not sign the 10 pledges. I have concerns, for example, about the outsourcing of our disciplinary process. And I want to work with ALL Jewish organisations.

Corbyn’s apparent nomination of John Bercow perhaps speaks to the latter’s refusal to take part in the shameful right-wing smear campaign against Labour. And it should serve to remind us that this campaign is far from over.

Fortunately, LAW is fully aware of this. And it has now launched a petition asking the most left-wing leadership candidate – Rebecca Long-Bailey – to oppose the BoD pledges. The petition, which currently has around 4,000 signatures, explains its opposition to the pledges and says:

We believe that the BoD’s ‘10 Pledges’ are an outrageous political interference by an organisation that is overtly hostile to today’s Labour Party and everything it stands for.

It ends by calling on “all socialists, anti-imperialists and Corbyn supporters to stay actively involved in the Labour Party and join us in this campaign against the BoD’s ‘10 Pledges’ and the ongoing witch-hunt against the left in the Labour movement”. And that’s a defiant message that we should all take heed of.