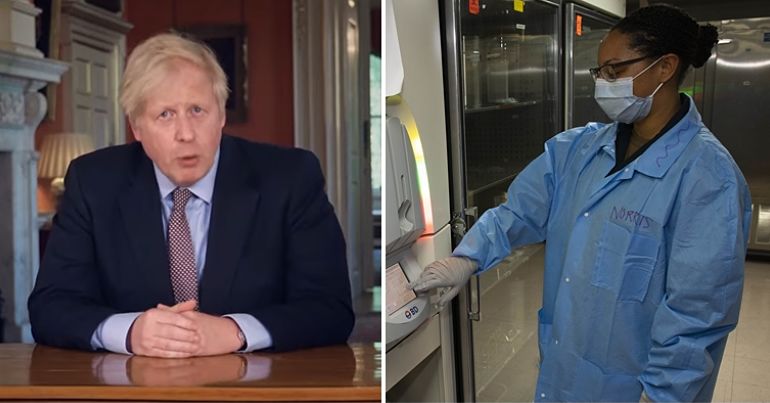 On 10 May, Boris Johnson addressed the British people with a coronavirus (Covid-19) update. He praised people’s “good sense” for having supported the restrictions so far. But just over halfway through his address he said there will now be a “change of emphasis”. This change means workers “should be actively encouraged to go to work” where they can’t work from home.

This sounds like welcome news for those who’ve lost their jobs or been furloughed. But “good sense” shows it’s not completely safe to ‘encourage’ people to go back to work yet. So Johnson’s “change of emphasis” could add further turmoil to an already unhappy workplace.

Johnson said that people should “avoid public transport if at all possible”. But as there were “8.3 billion passenger journeys on public transport vehicles in 2018/19” it’s a widely used service. And not everybody can travel to work “by car…walking or bicycle”. In anticipation of this announcement, the National Union of Rail, Maritime and Transport Workers (RMT) said:

the Government has brought forward the start of the mass transport mobilisation and the lifting of COVID-19 restrictions to Monday May 11th.

This is earlier than expected and completely contradicts assurances sent to us only yesterday that the rail industry had only put in place services and arrangements to protect passengers and workers from a “not high” increase in passenger numbers at a later date.

On 5 May, RMT had already warned:

The report leaked this morning to the BBC exposing the impact on passenger numbers of maintaining Government social distancing guidelines on the tube is a wake up call to all those tub-thumping for a jacking up of transport services from May 18th without properly assessing the consequences.

…To maintain the Government’s own social distancing guidance would mean huge logistical and staffing input to ‎manage passenger flows onto trains and it is imperative that all staff involved in this process are properly protected.

Education unions have also sent a warning. They oppose early re-opening of schools. The Canary reported that unions representing teachers wouldn’t return to school until a strict “test and trace” coronavirus programme was in place.

The public support for our essential workers across the public sector has shown that they will not accept another botched process, Boris Johnson has been exposed for his, and the government’s, catastrophic handling of this crisis and I[‘m] sure we are all fed up to the back teeth with his jingoistic language as some sort of elixir to the daily tragedies our communities are suffering.

Our school support staff, teachers, pupils, parents and relatives are rightly concerned and alarmed at the thought of a hasty programme to reopen our schools, therefore the school support staff unions including Unite, teaching unions and the TUC have set out the key principles and tests that must be met before that can happen.

Moreover, cycle and motorbike couriers who transport coronavirus samples are among the many key workers in the fight against this pandemic. Yet the Independent Workers’ Union of Great Britain (IWGB), whose members deliver these samples for The Doctors Laboratory (TDL), is voting on strike action to protest 10 proposed redundancies and unsafe working conditions. IWGB states:

Medical couriers transporting Covid-19 samples on behalf of NHS pathology contractor The Doctors Laboratory (TDL) are to vote on strike action, in response to the company’s decision to make redundancies during the pandemic, and its failure to address health and safety concerns.

IWGB claims the company has failed to:

It is inconceivable that we would deliberately expose any of our workforce, of whom our courier fleet is an important part, to undue risk at any time but especially now. All our protocols are compliant with current regulations, are kept under constant review and when they change, our protocols change with them.

Like many organisations across the country, our laboratories have experienced a significant reduction in activity over the past months, which means there is less demand for sample transportation. Proposed redundancies are not a consideration ever made lightly even in these exceptional circumstances and a final decision will be not be made until the full consultation, which is currently in progress, has been completed.

TDL complies with Category B [dangerous goods] packaging for all movement of COVID-19 samples. TDL’s packaging is approved by a leading UK dangerous goods safety adviser and by Public Health England. TDL couriers do not handle samples directly, they carry the packages, and are provided with hand sanitisers, protective gloves, masks and disinfectant wipes.

The spokesperson also said: “couriers are not obliged to collect a sample they believe to have been incorrectly packaged or from an area they consider might be unsafe”.

“A recipe for chaos”

While the government is expected to lay out further plans for how the return to work will operate, the Trades Union Congress (TUC) has been critical of current proposals. It criticised how much power they gave employers. TUC general secretary Frances O’Grady said in a press release:

Boris Johnson’s statement will cause working people a lot of confusion and anxiety.

The government still hasn’t published guidance on how workers will be kept safe. So how can the prime minister – with 12 hours’ notice – tell people they should be going back to sites and factories? It’s a recipe for chaos.

Unions want to support a safe return to work so we can start rebuilding Britain. Government must provide clear direction to workers and business by introducing tough new rules on workplace safety.

That’s the only way to build public confidence in their plans and get the economy moving.

It needs to be safe – people over profit

People felt Johnson’s message was unsafe so some took to social media to make their message clear. Johnson’s approach to tackling the virus has left people confused and divided. Which is worrying given that experts have emphasised the importance of unity and clarity. If for once, at this time of national importance, Johnson could put people before profit, he might save lives instead of endangering them.